As expected, Sen Mel Martinez, recently installed as the Chair of the Republican National Committee, favors a massive amnesty, starting with "guest workers" who will never leave.

Sen. Mel Martinez of Florida, the Republican National Committee's new general chairman, wants Congress to pass an immigration bill this year that will include a guest-worker program with "earned citizenship" requirements for illegal aliens.

Mr. Martinez, whose election encountered sharp opposition from some RNC members who think his support for giving illegal aliens a path to citizenship is a thinly veiled form of amnesty, said, "I don't support deporting these people because I don't believe that's a realistic approach."

In an interview with The Washington Times, his first since taking the helm of the RNC, he acknowledged the opposition to his election and his support for the Kennedy-McCain bill that called for a multistep process of earned amnesty for all but the most recent illegals. But he said, "My views on immigration are not well understood." [New RNC chief backs bill with guest-worker plan, The Washington Times, February 2, 2007]

Last year, hundreds of constituents and other citizens sent bricks to Sen. Martinez (in support of The Fence) to show their opposition to the bill he sponsored which is one of the most destructive and radically anti-American pieces of legislation ever written. But Martinez is not interested in what the little people (i.e. "citizens") want, since the corporate owners of this country have big globalization plans in mind that don't include U.S. sovereignty. 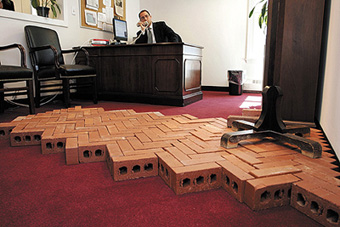