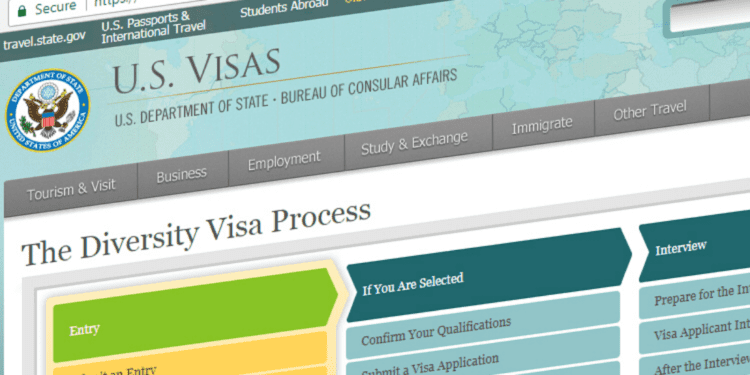 Sunset for the Diversity Visa? 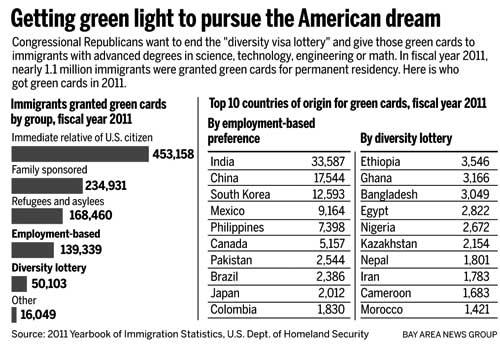 House Republicans have been pushing a small immigration compromise that at least sounds like a positive sum deal. But in the current environment, A Could Be Worse Deal sounds like it won't get anywhere without massive concessions elsewhere (which, no doubt, the cheap labor wing of the party will gladly agree to — by the way is "wing" the right word?).

In the first test of a new political climate on immigration reform, the lame-duck House of Representatives is renewing a push to eliminate America's random visa lottery and replace it with a bill favored by thousands of Silicon Valley immigrant workers:

And by hundreds of Silicon Valley employers looking to pay lower salaries. The attitudes of American citizens who work in Silicon Valley does not appear to be of interest.

one that would give green cards to foreigners with advanced U.S. degrees in science, engineering and math.

House Republicans say they are wasting no time putting the bill up for a Friday vote after a similar measure failed in September.

So, what happened on Friday? Can't find any mention of it.

The maneuver follows a vigorous debate in the conservative movement over how to warm up to a growing Latino and Asian-American electorate that was pivotal in re-electing President Barack Obama.

Republicans are even adding a provision they once opposed to allow the spouses and minor children of legal immigrants to join their family members in the United States instead of waiting for years in their home countries. ...

Some Democrats, however, are deriding the new push as a deceptively limited measure that will pass the GOP-led House but fail in the Senate, where majority Democrats would be reluctant to give the GOP what it wants now because it needs conservative votes to enact broader reforms next year.

Republicans are "trying to pretend they're pro-immigrant by this bill, knowing that it goes nowhere," said U.S. Rep. Zoe Lofgren, D-San Jose, the top Democrat on the House immigration subcommittee.

Passage of the visa swap would fulfill a goal of reigning House Republicans to gut the annual "diversity visa lottery," which randomly awards 50,000 green cards for permanent residency to people from countries with low rates of immigration to the United States as long as they have a high school degree.

Those green cards would instead go to immigrants with much higher education credentials — a master's or doctorate in the so-called STEM fields: science, technology, engineering and math.

The high-skill STEM visas have bipartisan consensus in Congress, but most Democrats have been unwilling to sacrifice the two-decade-old visa lottery to get them. One problem, said Lofgren, is that the Republicans' swap would actually cut immigration, since there are not enough foreigners with advanced degrees who want to emigrate to fill all the high-tech slots once a backlog is taken care of.

And actually cutting immigration in an age of high unemployment would be the worst thing in the world because the whole point is to increase immigration to prove you aren't racist.

For many people in Africa who are not already in the upper classes, cutting off the diversity visa takes away "one of the few options that individuals have to legally enter the United States," said Joe Sciarrillo of the San Francisco-based African Advocacy Network.

And what could be more important than the right of random Africans without any particularly skills to legally enter the United States.

"The diversity visa is more open and egalitarian in terms of who qualifies for it," Sciarrillo said. "A single mother with a high school degree in Eritrea has as good a shot as an elite businessman."

Not to mention the Eritrean single mother's Islamic extremist son.

Technology worker lobbyists in Silicon Valley and elsewhere have been pushing for a compromise, hoping to persuade lawmakers that the visa lottery has achieved its original purpose of diversifying the immigration pool.

"The visa lottery has done its job," says a report being released Monday by the Institute of Electrical and Electronic Engineers, or IEEE. "It is that rarest of things: an act of Congress which so plainly achieved its purpose that it is no longer necessary."

The group's report concludes that the lottery over the past 20 years helped open the doors to Africans and Eastern Europeans who had been excluded from America's family-focused immigration, but now the program is outdated. For instance, 2,800 Nigerians won a diversity visa last year by the luck of the draw; but there were also more than 3,000 highly educated Nigerian foreign students in the United States who would have benefited from a STEM green card.

The Diversity Visa is a disaster because it should really be called the Chain Migration Initiation program. The 50,000 Diversity Visas per year get multiplied over time by the larger "Immediate Relative" and "Family Sponsored" categories. Plus, they provide connections for illegal immigrants.

It is better policy to give the green cards to those with the highest skills whom American universities have already invested in, said IEEE's Berg, a Saratoga resident. The chapter counts nearly 12,000 members. ...

The House voted 257 to 158 in favor of a similar bill on Sept. 20, but the vote was structured in a way that required a two-thirds majority, allowing Republicans to blame Democrats for its defeat just weeks before the presidential election.

This Friday, however, the vote will need only a majority and is likely to coast through the House, facing its bigger obstacles in the Senate.

"It's really just an effort to try to divide people once again," Lofgren said.

Who are these people "Lofgren" is so worried about not dividing? American citizens and random people in Africa?