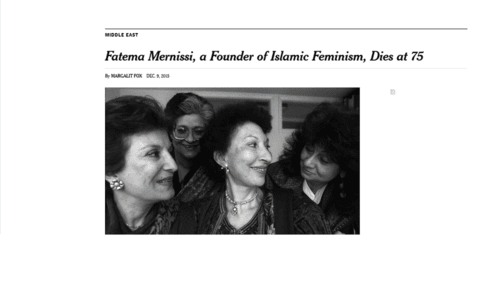 I know ... I hadn’t heard of her either, but the Times says that she was a seminal feminist Muslim.

Among the more amusing passages in this ideologically correct obit are these:

Throughout her work, Professor Mernissi, who favored a moderate, inclusive Islam, emphasized that her deep study of religious texts had turned up little support for women’s long subordination. That reading, she argued, sprang from centuries of misinterpretation by male leaders intent on maintaining the sexual status quo.

“Not only have the sacred texts always been manipulated, but manipulation of them is a structural characteristic of the practice of power in Muslim societies,” Professor Mernissi wrote in “The Veil and the Male Elite: A Feminist Interpretation of Women’s Rights in Islam” (1991, translated by Ms. Lakeland). “Since all power, from the seventh century on, was only legitimated by religion, political forces and economic interests pushed for the fabrication of false traditions.”

As we know from her success in stopping female genital mutilation and honor killings, to say noting of the precipitous drop in terror attacks thanks to her feminist visions, Ms. Mernissi’s quest to force Muslims to accept “true” Islam was a smashing success.