Britain is known to be the softest touch in Europe for welfare goodies and remains the top magnet in the region for shiftless moochers from around the world. One symptom is the bunch-up of foreigners at the French town of Calais, a major ferry port that lies only 21 miles from freebie Britain.

The 1,000+ Africans lounging about Calais, eating the free food put out by the French, recently rioted as Sudanese and Eritreans battled each other for access to the parked trucks, which they hop to enter Britain.

Below, fleebag Africans line up for chow handouts in Calais. 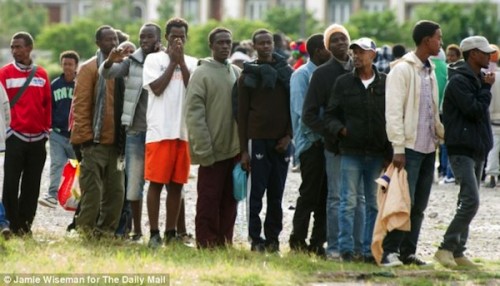 The Daily Mail published a story Aug 5, More than 50 people injured in clashes in Calais after rival African migrants fight at a food distribution centre, which contained a sidebar with an interesting new fact about Libya and the unlocking of its ports to European travel — for 300,000 foreigners:

The huge influx of migrants from Africa comes after the re-opening of the ports in Libya – a main jumping off point to Europe.

Migrants from Eritrea, Ethiopia and Sudan who have been gathering there for two years can now leave – and an estimated 300,000 are said to be waiting to head across the Mediterranean for a new life.

The change of policy came after Libya said it would help them head to Europe if the EU did not give it financial help to cope with the influx.

From January to April this year, 42,000 migrants were recorded by EU border agency Frontex – 25,650 of them crossing from Libya.

The situation around Calais sounds terrible, with hundreds of Africans camping out while they wait to get into Britain, according to this report from Britain’s Channel 4:

Europe doesn’t needs thousands of unskilled workers from Africa and Asia, given the Europe’s stubborn unemployment of its own citizens. It’s likely that many foreigners will eventually form up into criminal gangs when their unreasonable expectations don’t pan out.

More than 50 people have been injured, one seriously, in clashes between African migrants gathered at France’s northern port of Calais trying to reach Britain, authorities said.

Police intervened to separate hundreds of migrants who had renewed a fight that broke out on Monday between Eritreans and Sudanese during the distribution of an evening meal.

Police twice had to separate the migrants and allow access to ambulances and firefighters, an official at the Pas-de-Calais prefecture said.

Christian Salmone, head of humanitarian group Hostel for Migrants, which has been distributing food, said since May about 50 have arrived each week. “It just doesn’t stop,” he said.

Salmone said the migrants, desperate to cross the English Channel to Britain, are taking more risks, trying to hide in or underneath vehicles making the crossing.

Some 40 riot police have been patrolling the area since Monday to curb what authorities have called an escalation in violence.

The French newspaper Le Figaro, citing a confidential border police report, said on Tuesday that 65,591 illegal immigrants had landed in Italy between 1 January and 30 June, compared with 7,913 in the first half of 2013. Eritreans making up a third of the migrants, followed by Syrians, many trying to escape the civil war.

Some 5,235 Eritreans were arrested in the first six months of the year for being in France illegally, the report said, adding more women and children were being seen as well.

The majority of those arrested were sent back to Italy. Nearly 900 were freed but ordered to leave France, although an undisclosed number asked for political asylum, the report said.

Three migrant camps in Calais were emptied by police in late May, an operation denounced by humanitarian groups.

Prefect Denis Robin had justified the move saying there had been a rise in violence and numerous cases of scabies.