Student visas are the perfect scam for any youngish-lookng person to enter the United States for whatever reason: simply enroll in some sort of educational institution from genuine accredited universities to low-rent visa mills, then never show up for classes and disappear into stupid-open America. The current estimate is that 6,000 foreigners considered concerning have taken advantage of this system among 58,000 visa overstayers this year overall.

Foreign students are compliant walking wallets in the mind of the educational industrial complex, currently adding $24 billion in easy money to the economy. As a result, education administrators insist on open borders for cash-carrying foreign students.

Shortly after the 9/11 attack on America, Senator Dianne Feinstein suggested a six-month moratorium on student visas but the college cabal came down on her like a ton of transcripts. She quickly relented as long as better security was promised.

Which leads us to today and the September 10 mindset of current America, where all the lessons of the 9/11 terrorist attack have apparently been forgotten.

Below, in 2012 Saudi Khalid Aldawsari was convicted of a terror plot in Texas after entering the US on a student visa. 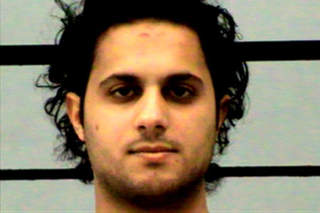 Brian Ross of ABC News did some excellent reporting on this piece, with the right questions asked and background provided. (His 2013 report on terrorists admitted as refugees was top notch.)

Watch more news videos | Latest from the US

The Department of Homeland Security has lost track of more than 6,000 foreign nationals who entered the United States on student visas, overstayed their welcome, and essentially vanished exploiting a security gap that was supposed to be fixed after the Sept. 11, 2001 terror attacks.

My greatest concern is that they could be doing anything, said Peter Edge, the U.S. Immigration and Customs Enforcement official who oversees investigations into visa violators. Some of them could be here to do us harm.

Homeland Security officials disclosed the breadth of the student visa problem in response to ABC News questions submitted as part of an investigation into persistent complaints about the nation’s entry program for students.

ABC News found that immigration officials have struggled to keep track of the rapidly increasing numbers of foreign students coming to the U.S. now in excess of one million each year. The immigration agency’s own figures show that 58,000 students overstayed their visas in the past year. Of those, 6,000 were referred to agents for follow-up because they were determined to be of heightened concern.

“They just disappear,” said Sen. Tom Coburn, R-Okla. “They get the visas and they disappear.”

Coburn said since the Sept. 11, 2001 terror attacks, 26 student visa holders have been arrested in the U.S. on terror-related charges.

Tightening up the student visa program was one of the major recommendations made by the 9/11 Commission, after it was determined that the hijacker who flew Flight 77 into the Pentagon, Hani Hanjour, had entered the U.S. on a student visa but never showed up for school.

Edge said ICE agents are trying to locate every one of the 6,000 missing students, but acknowledged that “we really have a lot more work to do” to tighten up the student visa program.

Despite repeated concerns raised by Congress, federal immigration officials have also continued to grant schools certification to accept overseas applicants even if the schools lack accreditation, state certification, or any obvious measure of academic rigor.

There are now more than 9,000 schools on the government approved list. The list includes such top flight American colleges as Harvard and Yale, but it also includes 86 beauty schools, 36 massage schools and nine schools that teach horseshoeing. Foreign students can enter the U.S. on a visa to study acupuncture, hair braiding, or join academies that focus on tennis and golf.

Once the student arrives in the U.S., it is up to the schools to keep track of the visa-holder’s whereabouts and report to the government if they repeatedly miss class.

That is a serious concern, Coburn said, because a number of for-profit schools appear to have been operating with a primary goal of selling visas, not educating students.

“We know we have a lot of non-accredited universities that are using this system to bring people in, collect money, and not educate them at all,” said Coburn, who is part of a bi-partisan group of senators that has been trying to tighten controls on student visas. “To me, it’s a mess.”

One school on the approved list, MicroPower Career Institute, licensed by the state of New York, continues to have four campuses on the approved list, even though five of the school’s top officials including its president were indicted on charges of visa fraud in May. According to the indictment, 80 percent of the foreign students enrolled MicroPower had delinquent attendance, putting them out of compliance with their visas. But the school did not report them, the indictment says. All five school officials have pleaded not guilty in the case.

ABC News visited MicroPower’s small fifth floor campus in a Manhattan office suite, but the school declined to make anyone available to comment.

Edge, who is Executive Associate Director at for ICE Homeland Security Investigations, said his agency had no choice but to continue to allow MicroPower to facilitate student visas.

“I can only say that this is the United States of America and everyone has due process,” Edge said.

The MicroPower case is one of several that touch on broader questions long raised about the student visa program.

Thomas Kean 9/11 Commission Co-Chair said the government has yet to address the security gaps the program has created. He said was stunned the federal government continues to lose track of so many foreign nationals who had entered the country with student visas. He noted that, even before the 9/11 terror attacks, federal officials had been aware of the gaps in the student visa program. The man who drove the van containing explosives into the World Trade Center garage in 1993 was also a student visa holder who was a no-show at school.

Janice Kephart, who was counsel to the 9/11 Commission and co-author of a separate report looking at how the hijackers entered the U.S., said the credibility of schools certified by ICE is another significant concern.

“When schools are not legitimate that enables terrorists to come here under a fraudulent basis and disappear into the fabric of society without anybody knowing that they are here for illegitimate reason,” Kephart said, “because the system itself will say theyre here legitimately when in fact theyre not.”

ICE has taken steps to address the issue, especially in the aftermath of a damning report by the Government Accountability Office in 2012, which found the agency had failed to adequately police for visa fraud. ICE officials told ABC News, for instance, that it has undertaken a new program to deploy field representatives around the country to personally inspect schools that had been approved to accept foreign students. So far, 15 field representatives have been hired, with a plan to ultimately employ 60 around the country, according to spokesperson Carissa Cutrell.

The agency has also launched a program so far installed at one airport, but planned for others that will immediately alert a customs inspector if a student is attempting to re-enter the country after their status has been flagged by a school official.

Edge said part of the blame for the continued trouble with the student visa program stems from a Congress that has been unwilling to impose tighter limits on schools many of which profit from tuition paid by foreign students.

Coburn, as well as Sens. Charles Grassley, R-Iowa, and Chuck Schumer, D-NY, were among those pushing for limiting ICE certification to accredited schools in 2012. But that effort stalled in the House of Representatives.

Rachel Banks, the director of public policy for NAFSA, the association of international educators, said her group has been working to promote opportunities for foreign study in the U.S. She said the group understands the need to monitor the arrival and departure of foreign nationals, but it should not come at the expense of legitimate applicants seeking to study in America.

“Students should not be scapegoated,” Banks said. “Foreign students are an asset and not a threat.”

The effort to expand options for foreign study appear to be prevailing. According to figures gathered by congressional investigators, the number of foreign nationals obtaining visas to study in the U.S. has grown from 662,966 in 2003 to more than 1.2 million in 2012.

Edge said his agency has accepted that those numbers represent a continued challenge for the Department of Homeland Security.

“Our work has only begun,” he said. “We have a lot more work to do in this space.”