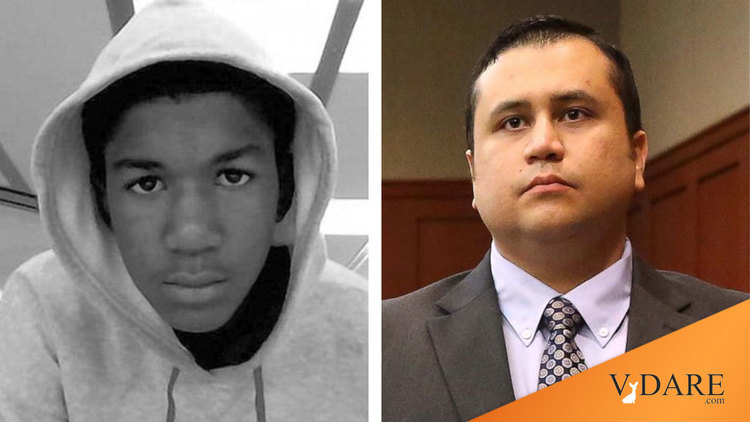 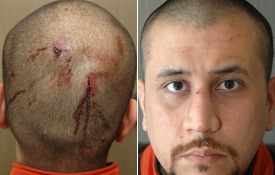 According to ABC News today, this is a picture of George Zimmerman's head taken two minutes after the shooting.  I cannot, of course, vouch for its authenticity.

It was a bad day for The Narrative. And that raises broader questions.
At George Zimmerman's bond hearing, according to the New York Times:

As part of his effort to win Mr. Zimmerman’s release on bond, Mr. O’Mara challenged the prosecution’s case, going through the state’s probable cause affidavit line by line, turning the bail hearing into what appeared to be a foretaste of the trial.

He aggressively questioned a state investigator, Dale Gilbreath, about the accusation that Mr. Zimmerman had racially profiled Mr. Martin, and he demanded to know what evidence the state had for the statement that “Zimmerman confronted Martin and a struggle ensued.”

“Do you know who started the fight?” Mr. O’Mara asked Mr. Gilbreath.

Mr. O’Mara then asked Mr. Gilbreath if the state had any evidence to contradict Mr. Zimmerman’s statement to the police that he had been making his way back to his car when he was punched by Mr. Martin. ...

On the other hand, the prosecution hinted that it was sandbagging evidence against Zimmerman, which seems plausible.

Meanwhile ABC News posted online what it claims is a photo of the back of Zimmerman's head shortly after the shooting.

Now they tell us.

As I've pointed out for weeks, the Trayvon Martin story is mostly interesting for what it shows us about what's wrong with the media.

As an individual story, Martin-Zimmerman is more or less the same depressing Stuff Happens as occurs hundreds of times per year across this huge country. The main difference, in this case, was that the press initially got wrong the race of the shooter and thought it had, for once, its Great White Defendant.

Determining fault justly in each of these cases depends upon small details of who did what to whom first, details that shouldn't be assumed a priori to Fit the Narrative. For example, in the 2010 case of plainclothes law enforcement officers killing an 18-year-old violist while "debriefing" in a parking lot I've walked through hundreds of times, I initially smelled a rat because the official spokesman the morning after the shooting implied that the parking lot was a drug-trafficking hot spot. I knew that's not true, and that raised obvious questions about what else the cops were distorting.

But, here's the thing: two years later, I still don't know what exactly happened in the last ten seconds of that young man's life. Unfortunate decisions were made, but I don't know the precise chain of events, much less how to allocate fault. At least, that case didn't disappear down the memory hole due to citizen activism (no thanks to the press, which showed minimal interest in challenging law enforcement's version of the story).

That the Martin-Zimmerman story was foretold so accurately a quarter of a century ago in the most famous book by the most famous journalist since Mencken only underlines that lesson: most of the journalists who have huffed and puffed this local small-time tragedy have personally read Bonfire of the Vanities. Deep down, they almost get the joke of what they're doing ... but they can't help themselves.

By any objective standard, the prestige press has shamed itself by its repeated distortions of the facts to make them fit its desires for a tale of White Privilege, Innocent Black Victimization, and Stereotyping. (Of course, by controlling the narrative, there will be virtually no accountability.) As I've mentioned before, when the press decides to go all in on a race story, they seem to pick ones that unravel into travesties at a higher than random rate. This story began to fall apart the moment George Zimmerman's picture was printed.

The central mechanism that leads the press astray is its War to Wipe Out Stereotypes, to wipe clean the collective mind, to render the blank slate as blank as possible. The fundamental problem of journalism, in the minds of the more elevated sort of journalist, is that its readers can notice patterns for themselves.

We can abbreviate this War to Wipe Out Stereotypes to stereowiping.

There are several reasons for why the prestige press is so fundamentalist in its fervor to stereowipe. The first, of course, is money: Man Bites Dog stories are more profitable than vice-versa. Another is class: "Two-Headed Calf Is Born" stories are always popular, but they're not very exalted. The press wants to have their cake and eat it, too by pretending that they are dealing with the massively important issue of white-on-black street violence or the lacrosse players raping black hookers epidemic or whatever is the latest two-headed calf story to come down the pike. The third is ideology: learning from the news is evil. The fourth is the sheer will to power.

That raises a final question about the Zimmerman Fiasco that probably can't be definitely answered, but is worth thinking about: why now? Why the frenzy to take a run-of-the-mill bit of bad news and get it so badly wrong?

I suspect Obama's re-election run plays into it in various complicated ways.

But, I suspect something that hasn't been mentioned much is a technological change brought about by cell phone videos and Youtube. The last two or three years have seen a flood of footage posted online by amateurs of Blacks Behaving Badly (much of it, indeed, posted by those behaving badly themselves). I don't see much statistical evidence that African-Americans are behaving worse than in the past, but, wow, there sure is a huge amount of video that has gotten past the national news gatekeepers to the public. If you've read a half dozen James Q. Wilson social science books since the mid-1970s, none of this behavior will come as a big surprise, although it still is pretty fascinating to watch. But if you get your world view from The News, it's hard to know whether you should believe trusted, authoritative media sources or your lying eyes.

The Trayvesty, therefore, would be media's attempt to strike back, to put the genie back in the bottle, to get the National Conversation on Race back on its well-worn tracks where it belongs.