The project to divide America’s unwieldy, corrupt state into half a dozen chunks had disappeared from the news in recent months, but now has re-emerged, Phoenix-like, onto the political scene. If the petitions have enough valid signatures then it’s off to the election for the voters to have their say. 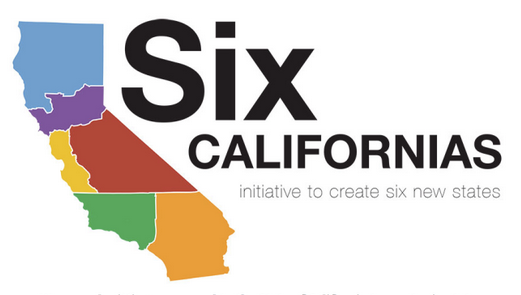 Of course, the only area of the current state with a robust economy is the Bay Area which includes Silicon Valley, where tech is booming. A divided California without the wealth producers of tech would be markedly poorer, and wealth redistributors wouldn’t like that. So there would be a liberal establishment backlash if the Six scheme got any traction with the voters. Plus Washington would have to agree — that would never happen.

But the initiative might shake things up a bit.

SACRAMENTO — Silicon Valley venture capitalist Tim Draper will submit signatures Tuesday to put what could be one of the most dramatic startups ever on the ballot – a plan to divide California into six states.

Draper, a multimillionaire known as “the Riskmaster,” and his team are expected to announce in Sacramento that they’ve gathered more than enough signatures to put the “Six Californias” measure before state voters.

The measure, a constitutional amendment, needs 807,615 valid signatures to qualify. Because the deadline has already passed for this November, the plan could end up on the November 2016 general election ballot.

Supporters would not say how many signatures they have gathered until Draper holds a news conference Tuesday in Sacramento. However, they said they were confident they had plenty to spare.

Democrats have denounced Draper’s idea, and worry that an outpouring of conservative support and a lengthy campaign for the proposal could hurt both Gov. Jerry Brown in November and the party’s presidential candidate in 2016.

“This is a colossal and divisive waste of time, energy and money that will hurt the California brand,” as well as the state’s “ability to attract business and jobs,” said Democratic strategist Steve Maviglio. “It’s unfortunate that Mr. Draper is putting his millions into this effort to split up our state rather than help us face our challenges.”

But Roger Salazar – a Democratic strategist who has worked for former Gov. Gray Davis, 2000 presidential candidate Al Gore and the Clinton White House, and is now the spokesman for Draper’s effort – called Maviglio’s take “the pessimistic view.”

“California is a beautiful place to live, and any time you can get new ideas and have a conversation, it’s a good thing for California,” Salazar said. “If it helps to make government more responsible, that’s a good thing, too.”

Under Draper’s plan, each of the six states would have its own government and own collection of elected officials, including congressional representatives.

A Field Poll in February showed that 59 percent of Californians surveyed opposed the idea. Even if Draper can turn that around, there would be another major hurdle: The U.S. Constitution requires the approval of both Congress and the state Legislature, which is now firmly controlled by Democrats.

Under the proposal, San Francisco, Oakland and San Jose would be part of the state of Silicon Valley, which would extend to Santa Cruz and Monterey counties; San Diego and Orange counties would be in South California; Los Angeles, Santa Monica and Santa Barbara would be part of West California.

Not a GOP ruse

Draper, speaking to a crowd of tech insiders in San Francisco earlier this year, insisted his plan was not – as some critics have suggested – a means of getting more Republican representation in California. He said he was simply aiming to spread Silicon Valley’s spirit of innovation to the entire state, which he said has been struggling with partisanship and lack of leadership as businesses decamp for better climates.

“We have had really good people running California,” he told the San Francisco crowd. “Why is this not working?

“Think of it as Sacramento being sort of … rusted,” said Draper, who is a registered independent. “We need to do something structural, something fresh. … If we don’t try, we’re failing in our complacency.”

Draper must now to submit his petitions to county registrars, who will have eight workdays to conduct an initial check to see if enough signatures are valid. If necessary, a thorough check could take another two months.

Draper is no stranger to the challenges of expensive state ballot measures. In 2000, he spent $20 million on a failed measure to support school vouchers.

When he first floated the Six Californias plan in February, Draper said he didn’t plan on putting a lot of money into the measure. But that changed: Draper spent $1.3 million and hired the signature-gathering firm Arno Political Consultants, which paid collectors as much as $3 per signature.

Draper has admitted that the ballot measure is a longshot, though he said private polling shows some conservative regions, including the Central Valley, are in favor of it.

But he said can convince Californians that something must be done for a state that has “the worst-managed government in the country.”

“This is not going to happen overnight,” he said.