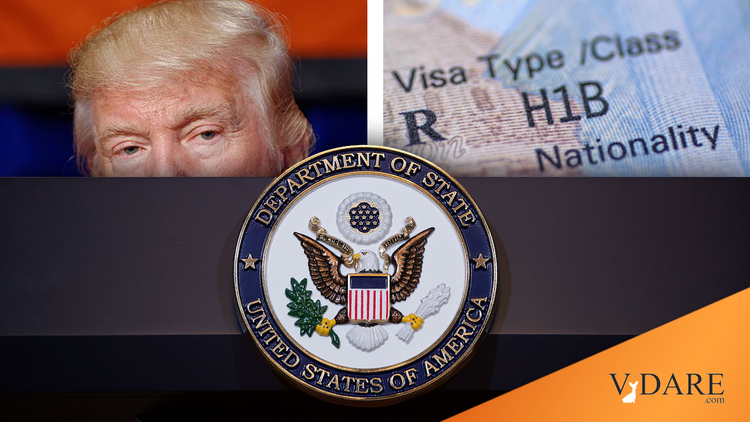 It was reported this week the State Department altered Trump’s executive order to allow the agency more leeway to allow in H-1B workers and other foreigners deemed “necessary.” The Department makes a whole host of exemptions, according to its June 12 bulletin on the moratorium [State Dept. ‘Guts’ Donald Trump’s Curbs on Fortune 500’s Visa Workers, by Neil Munro, Breitbart, August 13, 2020].

Travel by technical specialists, senior level managers, and other workers whose travel is necessary to facilitate the immediate and continued economic recovery of the United States. … The petitioning employer has a continued need for the services or labor to be performed by the H-1B nonimmigrant in the United States

The State Department justified these exemptions by claiming Trump’s order allows the agency to make exceptions in the case of the “national interest.” Apparently, it’s in the national interest to allow Indians to take jobs from American workers during record levels of unemployment.

Immigration patriot lawyer John Miano told Breitbart this move “eviscerated” Trump’s executive order: “There is no doubt about it — whoever created this is thumbing their noses at President Trump.”

If Trump wants to get his agenda enacted, he needs people who actually agree with him working for him. It’s time to clear out Foggy Bottom’s den of vipers.