The State Department’s program of admitting thousands of foreign college students on the J-1 visa program has been a stab in the back to young Americans looking for a job in a toxic employment environment. The current youth unemployment rate is the highest since World War II, and an August BLS survey reported that more than 4 million American young people were jobless, over 18 percent.

And yet, Washington has continued merrily along with special visas for foreign young people because the elites imagine that such programs are a cheap way (for them) to accomplish foreign policy goals of fostering friendly relations with unfriendlies, (like the Saudis). The Denver Post reported that “there were 320,805 visas for all categories of J-1 visitors for 2010.”

The good news today is that the State Department is capping the egregious J-1 visa program. The bad news is that it is not being ended completely — something that almost never happens in Washington, regrettably. Also, the reason cited in the enclosed news article for the change is that the level of exploitation of the foreign kiddies was getting out of hand. There is no mention of Americans being harmed by a federal program that saves employers 8 percent to hire foreigners over citizens.

Below, a Bulgarian student works as a lifeguard in the United States. Is lifeguard a job young Americans don’t want to do? 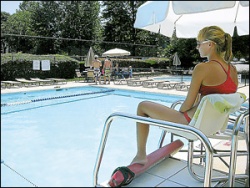 The State Department is capping a popular exchange program for foreign college students over persistent problems that have included low-paid participants turning to homeless shelters, a walkout over working conditions at a chocolate factory and in one case a woman forced to work as a stripper.

The agency published new rules Monday that limit the number of future participants to this year’s level and put a moratorium on new businesses becoming sponsors for thousands of foreigners who use the program to visit the United States.

The changes to the J-1 summer work and travel program come 11 months after The Associated Press reported widespread abuses, including some students paid $1 an hour or less for menial jobs.

The students given temporary visas for up to four months are required to have jobs and often work in resorts and restaurants. Participation has boomed from about 20,000 students in 1996 to a peak of more than 150,000 in 2008 and roughly one million foreign post-secondary students have participated in the past decade.

The department says future participation will be limited to the “2011 actual participant levels.”

The program was designed to showcase America and foster understanding among cultures. But as participation grew, so did the problems. And after years of complaints in one of the State Department’s most popular programs, the agency revised it rules this summer to shift more responsibility onto the 53 entities the department designates as official sponsors for the program.

“Yet, despite these new regulations, the number of program complaints received this year continues to remain unacceptably high and includes, among other issues, reports of improper work placements, fraudulent job offers, job cancellations upon participant arrival in the United States, inappropriate work hours, and problems regarding housing and transportation,” the State Department said Monday in the Federal Register.

“To ensure that these issues are appropriately addressed, the Department is continuing and augmenting its review of the Summer Work Travel program and its governing regulations.”

George Collins, an inspector with the Okaloosa County Sheriff’s Department in the Florida Panhandle, has complained about what he considers the State Department’s lax oversight and failure “to deal with the severe exploitation we’ve seen.” He called problems with the program “epidemic” in his area, a tourist region with white sand beaches on the Gulf.

“If they want an effective monitoring system within their current staffing limits, they should set up an outreach to local law enforcement, code enforcement, and social organizations,” Collins said. “If the State Department can set up a streamlined and effective reporting system, they could more easily identify the sponsors and work hosts who exploit these workers. With all the complaints our agency has filed over the last several years, I’m surprised they haven’t contacted us.”

Perhaps the most visible demonstration of worker complaints in the program came in August, when dozens of workers protested conditions at Hersey’s chocolate factory in Pennsylvania, complaining of hard physical labor and pay deductions for rent that often left them with little money.

There have been major problems in the program for years, but that was made worse when the weak economy left many students with little opportunity to earn back the thousands of dollars they paid to participate. Couple that with unscrupulous third-party labor brokers, and the program was hounded by exploitation.

AP reporters found students seeking out homeless shelters, or taking second and third jobs. There were cases in which students complained of having to share beds with strangers because the labor brokers stacked them into sparsely furnished apartments or mobile homes with as many as a dozen people.

Among the worst cases, the AP found a woman who thought she would be working in a restaurant in Virginia, but was beaten and forced to work as a stripper in Detroit in 2005.

The visas are issued year-round, since students come from both hemispheres on their summer breaks. They work all over the country, at theme parks in Florida and California, fish factories in Alaska and upscale ski destinations in Colorado and Montana.

The program generates millions for the sponsor companies and third-party labor recruiters.

Businesses that hire students can save 8 percent by using a foreign worker over an American because they don’t have to pay Medicare, Social Security and unemployment taxes. The students are required to have health insurance before they arrive, another cost that employers don’t have to bear.

Many businesses say they need the seasonal work force to meet the demands of tourist season.

The State Department has said most participants enjoy the program, make memories and friends they keep for life, and often apply to participate more than once.