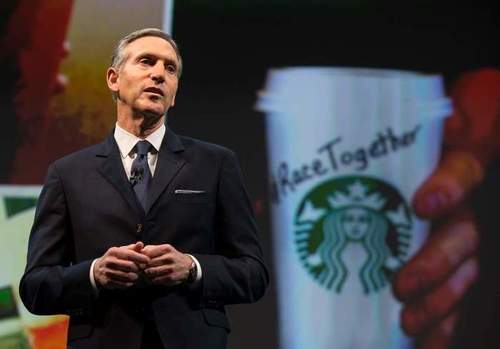 Starbucks CEO Says "I'm Not Worthy" to be President; America Fails to Disagree

Last noticed ordering his baristas to harangue uncaffeinated customers about race, Starbucks CEO Howard Schultz has resurfaced with an NYT op-ed in which he discusses “speculation about my candidacy,” but concludes: “I’m not worthy.”

FROM the earliest days of Starbucks, I’ve been captivated by the art of leadership. I was mentored over three decades by Warren G. Bennis, the eminent professor and scholar on leadership. I’ve gathered insights from peers, and I’ve drawn inspiration from our 300,000 employees. But nothing I’ve read or heard in the past few years has rivaled the power of the image I viewed on my cellphone a few years ago: Pope Francis, shortly after his election, kneeling and washing the feet of a dozen prisoners in Rome, one of them a young Muslim woman, in a pre-Easter ritual.

In recent weeks, I have taken to recalling that humble, inspiring act of servant leadership as I observe the antithesis: a field of presidential aspirants unable to rise above petty politics. …

Our country deserves a president humble enough to see leadership not as an entitlement but as a privilege.

The speculation about my candidacy reminds me of a lesson from a great Jewish leader. A decade ago, I visited the Western Wall in Jerusalem with Nosson Tzvi Finkel, a widely respected rabbi in Israel. Surely Mr. Schultz could have also squeezed in an anecdote about himself and the Dalai Lama to assuage the important Buddhist bloc? Or at least Oprah

As we approached one of the holiest sites in Judaism, the rabbi halted about 10 yards away as a crowd of admirers gathered nearby. I beckoned him further.

“I’ve never been closer than this,” the rabbi told me. Astounded, I asked why.

So far, Americans seem to be be taking Schultz at his word, which perhaps may have come as a surprise to a CEO who, judging by his #RaceTogether brainstorm, isn’t used to being told No.

By the way, if, for one reason or another, Hillary can’t make it to the starting line, what exactly is the Democratic Plan B again? They’ve spent all these years dumping on stale pale males, but they’re going to roll out Biden or Sanders in 2016? Really?

You know, now that I think about it, the Democrats do have their own billionaire who is a woman and is black and is even better at doing live TV day after day than Donald Trump is. Just sayin’ …

Oh, wait, somebody has already thought of that and has come up with a plan for converting the Oprah 2016 Factor from a threat to an asset: 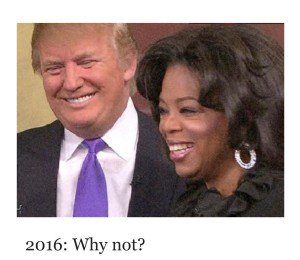 After declaring his run for the White House Tuesday, Trump appeared on ABC and said Oprah Winfrey would complete his presidential dream ticket.

“I think Oprah would be great. I’d love to have Oprah,” Trump said. “I think we’d win easily, actually.”

Trump had suggested Oprah as a potential sidekick once before — while considering a bid for the presidency in 1999.