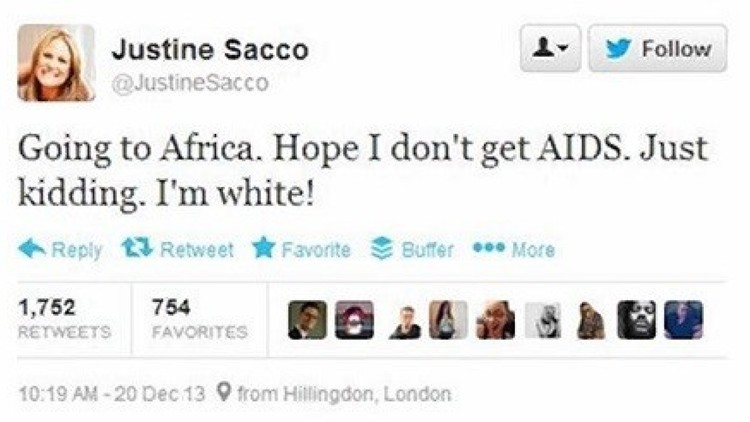 Stalin v. Trotsky On Twitter: The Defenestration Of Justine Sacco

The internet is abuzz about Justine Sacco and her tweets about AIDS and visiting the center of AIDS in the world. Sacco is a now former ad executive who got the two-minute Emmanuel Goldstein treatment. And, it is important to stress, it was the Goldstein "Two Minutes Hate" treatment in all the historical importance.

In Communism, the most hate is directed against fellow Communists, as the never ending campaigns by Stalin against his rivals in the Communist Party; Bukharin, Zinoviev, Kamenev, and, above all, Leon Trotsky, on whom George Orwell based the character of Goldstein, as among Stalin's rivals, he was the longest lived.

Why Did Buzzfeed & Co. Target Justine Sacco For Online Assassination

Other than the very sad fact that a lot of bitter people obviously had nothing they would rather do on the last Friday night before Christmas, why did this happen?

To begin with, Sacco's tweet cannot only be interpreted in the way Buzzfeed and its online lynch mob chose to interpret it; which is racist, insansitivist, Africanist, and AIDSist. Could it be that in a sloppy way Sacco was using humor to make a point about injustice? AIDS in Africa disproportionately ravages blacks on that continent. "I'm white!" sounds an awful like the kind of left-wing snark you hear every hour on MSNBC.

If Rachel Maddow tweeted that, no one would question what she meant.

This isn't me defending Sacco. I have no idea what was in her heart. But neither did those who followed BuzzFeed's lead and managed, in just a few frighteningly short hours, to successfully place her head on a pigpole. Sacco is a young, professional, New York woman. Chances are about 99.9% that she's a BuzzFeed-loving, Obama-voting, MSNBC addict.

Which leads to the most important question…

Answer, why not? Communists are not squeamish about killing their own, just ask the aforementioned Old Bolsheviks. Under Communism, one must as a matter of course, kill or be killed. No other lesson needed than that of Jang Song Thaek, Kim Jong Un's closest rival. Kim had Jang killed because Jang was a threat. Kim also killed many others who were not threats, but those are only what Stalin calls a statistic, and a object lesson to others not to oppose the Communist Party, which is the main point, no opposition will be tolerated, even if one is not actually opposing the Party.

It was clear given the stinging defeat given to the radical left in the Phil Robertson affair that an objective lesson was necessary. The Communist Party always relies on fear to gain obedience, and taking Sacco's head was a lesson to all who dare make jokes about AIDS, homosexuals, blacks, or Africa.

That the person was a fellow Party member was irrelevant. Everyone will think twice when they hit Twitter and therefore censor themselves.

Also of interest, it appears that despite the Italian last name, the Sacco family were English speaking immigrants from South Africa. Even more interesting, Sacco's father, yet un-named, joined in the two-minute hate of his daughter. Not a surprise, as the Communist Party encourages inter-family snitching, as Nineteen Eighty-Four described.

'I Am Ashamed': PR Exec Who Sparked Outrage With Racist Tweet Apologizes After She's Fired And Her Own Father Calls Her An 'Idiot'

The PR executive who was summarily dismissed after her racist Tweet sparked a revolt on social media has apologised - as her own father called her a ‘f****** idiot’. Justine Sacco said that she was ‘ashamed’ over her actions and said she had been ‘cavalier’ in making her tasteless joke about the AIDS crisis in Africa. But her father, who has not been publicly named, was more forthright and said that what she did was ‘unforgivable’.

He also apparently backed the campaign to name and shame his daughter as, in an ironic twist, it emerged he moved his family from Cape Town to the US in 1994 to escape racism at the end of Apartheid.

Interesting, in that they fled South Africa in 1994, the year Comrade Nelson Mandela was elected President. Were they fleeing black racism, crime, and violence? Probably, but don't want to admit it.

If so why such a sudden shame for his daughter's opinion of black Africa? Or did the un-named Sacco pere lie about his reason for leaving South Africa, blaming white racism? Did the family submit a false application for political asylum in the United States, claiming the racism of the apartheid government as their reason for fleeing to the United States? And why are we allowing such a vile human being as Sacco pere into the United States? Like a good communist, he participated in a two-minute hate of his daughter. How vile. And, if true that Justine Sacco was a typical Obamabot, do we need any more like her?