Muslim Bethlehem Hopes Some Christians Will Remain (for the Tourists)

Every Christmas season, the world glances toward Bethlehem and sometimes notices the disappearing Christians in the town of Jesus’ birth as hostile Muslims make life untenable there and beyond.

A century ago, Bethlehem was 90 percent Christian. Today the population has dwindled to around 15 percent. So now the place is a Muslim town with a Christian history — like the rest of the Middle East.

Jihadwatch’s Robert Spencer presented a talk recently at the Restoration Weekend event with the topic “Why Christians are persecuted in the Middle East” as part of a panel titled “The Genocidal Axis.” Hint: the majority Muslim population is not merely in a grumpy mood, but Spencer stated there is “an organized effort to expel all the Christians from the Middle East… Churches are being burned.”

Meanwhile, some leading politicians of Bethlehem want to go against the ethnic cleansing trend and encourage Christians to stay in the community, even return from abroad. The reason is not a newly developed sense of human compassion (which is hard to locate among the Soldiers of Allah), but the appeal of money. Allowing the birthplace of Jesus to devolve into a cardboard theme park run by Muslims who despise the Christian message is understandably unappealing to religious people who want to visit the place of the Gospels. So Christians are now seen as desirable living props to attract tourist cash.

Of course it’s unsurprising that Christians want to leave. Who can blame them? Islam and freedom are incompatible, as Dutch statesman Geert Wilders has noted.

Below, a worshipper lights candles at Bethlehem’s Church of the Nativity. 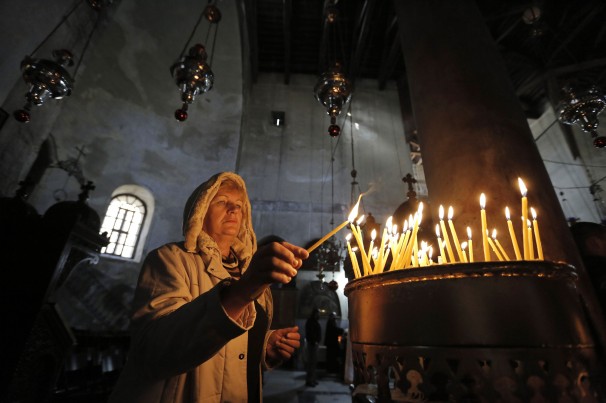 BETHLEHEM, West Bank — There’s been something missing in the birthplace of Christianity: Christians.

For years, Palestinian Christians have been quietly abandoning the place where Jesus is said to have been born in a manger. Middle-class residents here have packed their bags for less chaotic lives in Latin America, Europe and the United States.

Tourism ground to a halt more than a decade ago, during the second Palestinian intifada, or uprising, and is now experiencing a comeback.

But Palestinians say major challenges remain: the Israeli military checkpoints and security barrier that separates Bethlehem from Jerusalem, a ten minute drive away; the shuttered homes and shops that are symbols of a stagnant economy; and the Israeli settlements that are growing around Bethlehem on land claimed by the Palestinians for a future state.

Vera Baboun, Bethlehem’s first female mayor, wants to make her city open to all, especially to Christian pilgrims — and those Palestinians who have left. A Christian whose late husband spent three years in an Israel jail during the first intifada, Baboun wants to lure back former residents, and roll out the red carpet to encourage Christian pilgrims to extend their stays.

Borrowing a tactic from American retailers, the mayor lit the Christmas tree in Manger Square two weeks earlier than usual this year, added singers and dancers to the daily festivities and kept the crafts market open for eight days instead of one.

She is expediting permits for five boutique hotels that will add 300 rooms to the existing supply of 3,700, which are filled during Christmas week but often sit empty the rest of the year. Efforts are underway to improve handicapped accessibility to the town for aging visitors and to renovate the Church of the Nativity, which UNESCO says is the oldest Christian church still in daily use.

“This is the place where the message of peace was born with Jesus Christ,” Baboun said. “When they talk about reviving the message, you need to revive the city.”

Clergy say the outmigration eventually could reduce Bethlehem’s historic churches to mere tourist attractions — a body without a beating heart. “It’s not enough to come and see the ancient stones,” said Father Shomali, a parish priest. “You need the living stones.”

Bethlehem was engulfed by fighting during the second intifada, including a 39-day standoff between Israeli soldiers and Palestinian militants who hid inside the Church of the Nativity. A new film titled “Bethlehem,” debuting in U.S. theaters in February, recalls those tumultuous days, telling the fictional story of an Israeli intelligence agent and his young Palestinian informant.

But with the violence long over, and U.S.-brokered peace talks again underway, Baboun is ready to focus on the future.

Tourist visits are up this year, to about 1.6 million visitors, Palestinians officials say. Most visitors come by charter bus, however, and linger just long enough to peer into the grotto at the Church of the Nativity where Jesus is said to have been born. Few stop to buy a string of rosary beads, or enjoy a plate of hummus. Almost all spend the night at hotels inside Israel, which competes with Bethlehem for tourism dollars.

“We don’t benefit from the buying power of these tourists,” said Fayrouz Khoury, deputy director of the Chamber of Commerce.

Taxis from Jerusalem often refuse to take travelers into Bethlehem, and Jewish Israelis are warned against entering the city, according to the Israeli Defense Forces. Detailed Google navigational maps end at the Israeli military checkpoints.

Efforts to stem Christian emigration have gone even more slowly. During the Ottoman era, a century ago, Bethlehem was 90 percent Christian. Today the city of 22,000 is more than two-thirds Muslim, thanks to an exodus of Christians, an influx of Palestinian Muslims and a higher Muslim birth rate.

Christian leaders arrange meetings with tourism and economic development officials with visiting emigres, who show up “with a lot of enthusiasm to invest and create jobs,” Khoury said. “But when they see the conditions aren’t so encouraging, they leave again.”

Khoury estimated Bethlehem’s unemployment rate at more than 23 percent — among the highest in the West Bank.

Vivien Sansour, a writer and producer in her early 30s, returned to her shuttered family home from Los Angeles three years ago to write about Palestinian farmers. She has childhood memories of singers and drummers parading with church patriarchs and townspeople between Bethlehem and Jerusalem — an event that ended with the building of the security barrier.

“I don’t have much to offer my children here,” Sansour said. “What I have is this dream of the past that my children will never know. But this is my home.”

Rami Nuseir, executive director of the New York-based United Christian Communities, said Palestinian expatriates “have the skills, they have the money” to make a difference in Bethlehem. His organization works to “halt the flight of Christians from the Holy Land,” according to its Web site, and “to encourage those who have left to return.”

Some older Bethlehem Christians point to an ongoing Christian exodus from Iraq, Syria, Lebanon and Egypt as another threatening sign. But in the West Bank, “the narrative that we’re leaving because the Muslim community treats us badly is a lie,” said Fadi Kattan, a Paris-educated returnee. “Christians have left because they have the means. The old business families have all left.”

Kattan is fixing up a house his family owns in Bethlehem’s Old City and trying to launch a career in tourism. It isn’t easy, he said, sipping an espresso in the lobby cafe of the Ottoman-era Jacir Palace. His great-grandmother, a member of the Jacir family, was raised here. Now it is a luxury hotel, part of the InterContinental chain.

One sign of international support for Bethlehem’s rejuvenation is a new billboard in Manger Square touting a “gift from the American people to the Palestinian people” — a U.S. Agency for International Development-funded road improvement project, part of a $100 million West Bank infrastructure package.

“We’ll better connect people with jobs and better connect tourists and pilgrims to this holy place,” Secretary of State John F. Kerry said during a visit here last month. “This is a road not just worth building here, but it’s a road worth traveling on, all of us.”