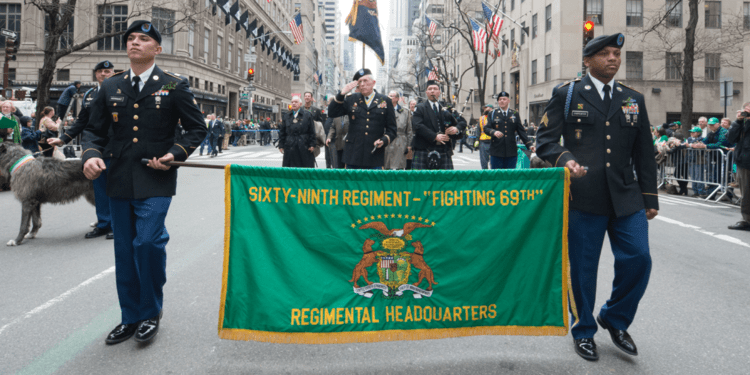 [Peter Brimelow writes: This was written nearly twenty years ago, for the London Times,in a column where I regularly tried to explain America to England. Much has changed since then, (see note below), but this column still has some relevance. Happy Saint Patrick's Day!]

On one day every year many New Yorkers decide that it's prudent to stay indoors and communicate only by telephone. Unlike the Children of Israel in Pharaoh's Egypt, they are not leaving the streets outside to the Angel of Death but to the somewhat less steady progress of the annual St Patrick's Day parade.

More than 100,000 marchers took part in last Tuesday's event, watched by a million spectators. There was little of the alcohol-induced rowdyism evident in some recent parades, but it was still a great day for Manhattan's innumerable Irish bars. As night fell and the Empire State Building was bathed in its special green St Patrick's Day floodlights, the city's traffic was still hopelessly jammed.

These Irish bars are one of the few signs that New York was once effectively an Irish city. The Irish are still an important voting bloc but now comprise only about 6 per cent of New York State's population. By comparison, Italians make up about 11 per cent and wield much more political power. Many old Irish neighbourhoods have long since become black or Hispanic, although the Irish Republic's recent economic troubles have produced a new transfusion of immigrants that is reviving some fading districts.

The tradition of the parade, however, is remarkably tenacious. One Wall Streeter I know marched with some 80 members of his family under the banner of the Irish county from which his forbears emigrated five generations ago. Then they all went back to the suburbs. Moreover, all Americans adore parades, and St Patrick's Day in New York has become remarkably ecumenical. The leaders of this year's parade were New York's mayor and police chief—Jewish and black respectively. The cafeteria in one Wall Street firm served green bagels.

Similar subtle changes are apparent in the overall position of the Irish in America. Simply put, more than a century after the start of the great exodus from Ireland, its descendants are finally assimilating to the Yankee Protestant culture they found on arriving here.

One obvious indicator is the remarkable presence of Irish names that have appeared in the Reagan administration. They include the president himself; a chief of staff, Don Regan; a secretary of state, Alexander Haig; a labour secretary, Ray Donovan; a communications director, Pat Buchanan--and, perhaps, an entrepreneurial White House aide, Oliver North.

The Republican Party is still often dismissed as the party of small-town Wasps—white Anglo-Saxon Protestants. But in fact this growing Irish affinity for it has been going on for years. As early as the 1960 election, for example, only the votes of the Jewish medical students prevented the campus poll at Jesuit-run Fordham University in New York from being carried by the Republican candidate, Richard Nixon - although his Democratic opponent was the man who would be the first Irish Catholic president, John Fitzgerald Kennedy.

No doubt, to some extent, this reflects socio-economic status. The average income of Irish-Americans is actually higher than that of Wasps, many of whom live in rural poverty in the South. There are many powerful Irish law firms and investment banks in New York, including Don Regan's old employer, Merrill Lynch, the largest stockbroker in the country.

Income alone, however, is not a decisive guide to American politics. The Jews are certainly wealthier than the Irish, but they remain overwhelmingly liberal. Underlying this American form of Irish Republicanism is a significant convergence of values. At a basic level, this means that the Irish and the Wasps agree on the Reagan election themes of work and family, however trite they may seem to pundits. At a more sophisticated level, the single most important leader in American conservatism's intellectual revival since the 1950s has been an Irish Catholic, William F. Buckley, editor of National Review magazine. [Peter Brimelow writes: The journalistic expression "overtaken by events" doesn't begin to cover the changes Buckley and the conservative movement have gone through since 1987.]

The British are accustomed to thinking of the Irish as left-wing because that is where Irish political energies in Britain have generally been directed. The American experience suggests that this is an accident of history. Once the alienating effect of the argument over Ireland's institutions is removed, the two traditions can view each other in a wider context. And they find they are fundamentally compatible.

This, of course, is also indicated by the curious paradox that large numbers of Irish citizens live in Britain, vote in British elections and serve in Irish Catholic regiments in the British Army. This compatibility was demonstrated in the 1918 general election when a majority of Irish voters supported the moderate devolutionary political tradition that had succeeded in getting a Home Rule bill passed on the eve of the First World War. But the first-past-the-post voting system resulted in victory for the radical nationalists.

Today's Irish Republic is the radical nationalists' creation. But federation with the rest of the British Isles would more accurately reflect Irish cultural reality. The failure to achieve it is part of a classical tragedy, of which the current effort to coerce Ulster's Protestants to Dublin's rule is merely the latest, but not the least disgraceful, stage.