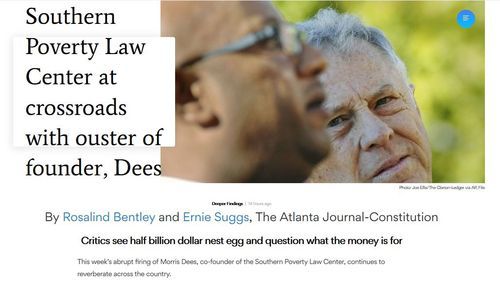 SPLC: "Critics See Half Billion Dollar Nest Egg and Question What the Money Is for"

The slow-motion Southern Poverty Law Center scandal is a fascinating example of how facts can be public but they simply don’t register on most people unless they are in tune with the zeitgeist.

The conventional wisdom is that conspiracy theories can’t possibly be true because once one person in the nefarious organization leaked the truth, the the world would instantly realize that the supposed good guys were really bad guys and the whole house of cards would come crashing to the ground.

And yet … that Morris Dees of the SPLC is kind of a big phony has been something you could look up in newspaper archives for the last quarter of a century at least. And yet the last few years have been incredibly successful for the SPLC as it has taken in vast amounts of money and formed alliances with giant tech monopolies like Amazon.

From the Atlanta Journal-Constitution:

This week’s abrupt firing of Morris Dees, co-founder of the Southern Poverty Law Center, continues to reverberate across the country.

It’s still unclear specifically why the longtime attorney was ousted by the Montgomery, Ala.-based nonprofit, which tracks hate groups and specializes in civil rights litigation.But some who follow the organization’s activities say the turn of events is not surprising.

The SPLC has drawn sustained criticism for its fund-raising tactics, which some say involve exaggerating the threats posed by white supremacists and other groups. The organization also has been accused in the past of not treating black employees fairly and of allowing sexual harassment. …

While the organization, founded in 1971, cultivated an image as a crusader against hate groups, including the Ku Klux Klan and neo-Nazis, it drew its own scrutiny over the years. Most of that was centered on the fund-raising tactics of Dees, who was once a direct mail marketer.According to publicly available tax documents filed for 2017, the SPLC’s endowment is approaching half a billion dollars.“I have watched the relentless fund-raising efforts that were being made and the extraordinary growth of the endowment,” said Yale University law professor Stephen Bright, who also teaches at Georgia State University. “It just continues to go up. They send out these appeals for people to send money when they don’t spend anywhere near what they take in.”

It’s almost as if Morris is more into fundraising than fundgiving.

Dees is 82. As a successful man like Dees gets older, the urge to do different things other than his strong suit often declines. For example, I have a lot of things I really need to do right now other than blog some more, but I’m good at blogging, so that’s what I do, over and over. Morris heads a fundraising juggernaut. He’s very good at it.

I bet the SPLC board is kicking themselves right now for firing Morris the day before the New Zealand massacre. If they had Morris working the phones right now, how much do you think the SPLC could gross off this one horrible event?

… In the early 1990s, the building for the Montgomery Advertiser, the city’s newspaper, was near the Southern Poverty Law Center. Employees from the two offices would grab beers together after work. That’s when reporters began hearing stories and complaints from those who worked at the center “that this place isn’t what it’s hyped up to be,” said Jim Tharpe, who was then managing editor of the newspaper.

Those rumblings led to the paper’s three-year investigation of the SPLC. The paper was a Pulitzer Prize finalist for its series of stories on the nonprofit. Tharpe, who is also a former Atlanta Journal-Constitution editor, said the accusations of misconduct surrounding Dees dismissal echo those lodged against the organization in the 1990s.“There were allegations by black employees that they were being treated unfairly and employees were saying that the fundraising wasn’t honest,” Tharpe said. SPLC leaders “were saying they needed money when they had tons of it.”

For a time, the agency cooperated with the newspaper as it did its reporting. But when the newspaper began asking for detailed financial records beyond what was legally required for nonprofits, the SPLC stopped, Tharpe said. It was difficult to figure out how they were spending their money.

There were about five people, including Dees, at the top of the organization, Tharpe said. But many of the other employees were at intern level, he said.“He is a brilliant marketer, and he knows how to push people’s buttons and get them to give money,” Tharpe said.

Laurence Leamer, who spent time at the center while he was researching a book, said the SPLC crossed the line in 2014.

Ehhhh … The SPLC was off into picking on non-extremists long before then. For example, one of its arch enemies was long Richard Lamm, the environmentalist Democratic governor of Colorado from 1975-1987, who won a famous environmentalist victory over the Winter Olympics in 1972. Lamm’s sin was running for the board of the Sierra Club in 2004 after the Sierra Club had been bought off by zillionaire David Gelbaum’s money in the mid-1990s.

Alongside hate groups, the organization placed former presidential candidate Ben Carson, who is the current secretary of Housing and Urban Development, on its list of extremists, particularly for his views on same-sex marriage.

“When they put Ben on the list of extremists, I called Morris Dees and said ‘How can you do that?’” said Leamer, the author of “The Lynching: The Epic Courtroom Battle That Brought Down the Klan,” which retells the history of the birth of the SPLC.

The group did eventually remove Carson’s name and issued an apology.“It started as this wonderful, idealistic organization, but the excess of money, extraordinary excess of money, has changed it,” said Leamer, who recently authored “Mar-A-Lago: Inside the gates of Power at Donald Trump’s Presidential Palace.”

Leamer said in the months that he spent in Alabama with Dees and the SPLC, he saw an organization more concerned with raising money at all costs than true social justice. “There is an overwhelming exploitation of these extraordinary, important issues, and nobody is daring to talk about it. I knew when I walked out of there, sooner or later, something was going to happen,” he said.

Bright agrees. “The chickens finally came home to roost,” he said. “I am more surprised that it finally came now. It must have been pretty bad that they didn’t let him resign at the age of 82, so he could have gone off into the sunset and perpetuate the myth of Morris Dees.”

The basic problem with the SPLC was that there hasn’t been much for it to do for about 80% of its lifespan. It wasn’t formed until 1971, well after the triumph of the civil rights movement was assured. With the decline of the SCLC, Martin Luther King’s old organization, there was a niche for the new SPLC in confusing donors.

So from the beginning, it was involved in mopping up operations, bayoneting stragglers in the weeds. There was some danger involved in this in the 1970s, but eventually there wasn’t much for the SPLC to do with all its lucre.

For example, in the 2000s, the SPLC was really annoyed that during the Performance Enhancing Drug era I pointed out that the top woman golfer, Annika Sorenstam, had pumped herself up so much from 2001 to her peak in 2003 that her arms hung away from her sides, like Teutonic muscleheads Hans and Franz on SNL.

But it’s hard to notice that yesterday’s hero has become today’s joke.