One of the most disturbing aspects to the unwelcome Mexicanization of the United States is the intrusion of Spanish into American life. There is nothing that prevents assimilation more than the increasing ease by which Spanish speakers can function in this country without learning English, a situation created by both business and government.

The story of Babel in the Bible was not about celebrating diversity, but was a curse from God to punish humanity. 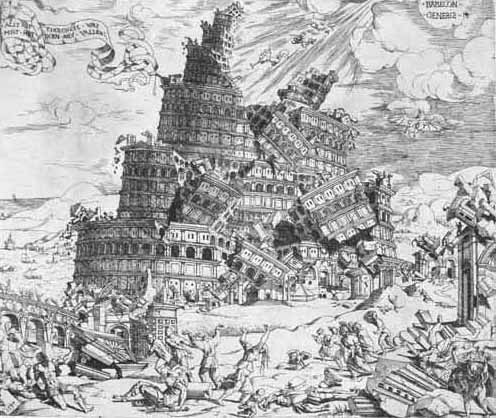 Government media, particularly NPR and PBS, are particularly disgusting in the way they hawk Spanish as the cool new thing for the kiddies to learn, like on Sesame Street. Let’s all speak Spanish, they propagandize.

In the real world, the only good reason to learn Spanish is to understand what MS-13 gangsters are planning, if you are so unlucky to be within earshot.

Naturally, the AP is all in for language diversity on the taxpayer tab.

FRESNO, Calif.—Phones at the radio studios on the outskirts of town kept ringing.

Saul from Visalia lamented cuts to public education, calling in on a December afternoon to Linea Abierta, the first nationwide Spanish-language public affairs show. Miguel from Madera asked how county taxes are distributed and Manuel from Calexico wanted to know whether schools still receive lottery funds.

The public affairs show is produced daily by Radio Bilingue, the nation’s only public, non-commercial Spanish-language radio network. With seven FM stations in California and more than 100 affiliates nationwide airing its programs, the Fresno-based network reaches an estimated 500,000 Latino listeners per week.

Controlled by Latinos and run by a Harvard-educated former farmworker, the network fills a crucial gap in public broadcasting, which attracts overwhelmingly white, middle- or upper-class, English speaking audiences. The industry has been struggling to capture Latino listeners.

“We want to offer news and information that’s relevant to the lives of our listeners,” said Linea Abierta’s executive producer Samuel Orozco, “so that they can use it as citizens, to be able to participate in the decision making process and be active members of society.”

Radio Bilingue focuses on immigrant and first generation Latinos who are predominantly low-income, young and under-educated. It offers a platform to the working poor, the undocumented, Indians from Mexico and
farmworkers.

The network is now expanding and building five stations along the U.S.-Mexico border.

Experts say Radio Bilingue’s efforts to foster civic engagement are key as the number of Latinos in the U.S. keeps growing and the nation moves toward a presidential election.

“They’re a model of how Latino public broadcasting can flourish,” said Florence Hernandez-Ramos, director of Denver-based Latino Public Radio Consortium. “There are a lot of people in the U.S. that speak primarily in Spanish. They have a right to engage in the national conversation.”

Hugo Morales, a former farmworker who graduated from Harvard Law School, founded Radio Bilingue more than 30 years ago because he felt poor Latino farmworkers had no voice.

“I was shocked that the mainstream saw our community as basically having no brains,” Morales said.

A Mixtec Indian born in the Mexican state of Oaxaca, Morales arrived in California when he was 9 years old, joining his farmworker father on a prune farm near Santa Rosa. He worked in the orchards, studied and helped his brother run a local Spanish-language radio show.

After graduating from law school, Morales lectured for La Raza Studies at California State University in Fresno and founded the radio station. The all-volunteer station eventually went professional and grew into a network with nationally distributed programming. Morales won a MacArthur “genius” grant and the Edward R. Murrow Award, public radio’s highest honor, for his work.

The Latino population nearly quadrupled in size since Radio Bilingue began broadcasting, to more than 50 million or 16 percent of the nation last year. But Latino participation in public media remains minimal. So the network’s mission changed to fill that gap: it would serve Latinos in general, not just farmworkers.
The network struggles to secure funding. Unlike traditional public broadcasting—which relies on donations from well-off listeners—Radio Bilingue relies on grants from private foundations and the government.

It has had difficulty securing stations in urban areas, especially Los Angeles, because new frequencies are not available in major markets and purchasing a station is expensive.

“We have not been able to provide the content this demographic will need going forward,” Tovares said. “There’s been a population explosion and we’re playing catch-up.”

Only about 5 percent of the listeners of NPR, the largest producer of public radio programming, are Latino, which the network is trying to change through diversity initiatives.

“If we are to survive,” Tovares said, “we need to reach these folks.”

The number of commercial Spanish-language stations, on the other hand, has skyrocketed to over 1,300, according to Arbitron research. But some commercial programming perpetuates stereotypes against gay and indigenous Latinos, Orozco said.

“What investors are seeing is not Latinos as citizens, but as consumers, as dollar signs,” he said. “The service for them is cheap entertainment that caters to the lowest common denominator.”

In addition to the public affairs show, Radio Bilingue produces a national news service, a talk show in Mixteco that simultaneously airs on stations in Oaxaca, a call-in youth show about sexuality and original reporting on topics from the arts to the environment. It airs programs from radio partners in Mexico.

The network, which also has Internet broadcasts, refuses to air narcocorridos, the popular drug ballads, and doesn’t accept money from alcohol companies. It produces educational messages and guides listeners to resources. Music—from Cuban jazz to mariachi to rock en espanol—is used to attract different audience subsets. In addition to professional producers, 90 volunteers host programs and help at the stations.

“Where Radio Bilingue is pretty extraordinary is that it’s pro-social; it uses radio as a medium for positive impact,” said Ed Kissam, an independent researcher who has studied the network’s impact.