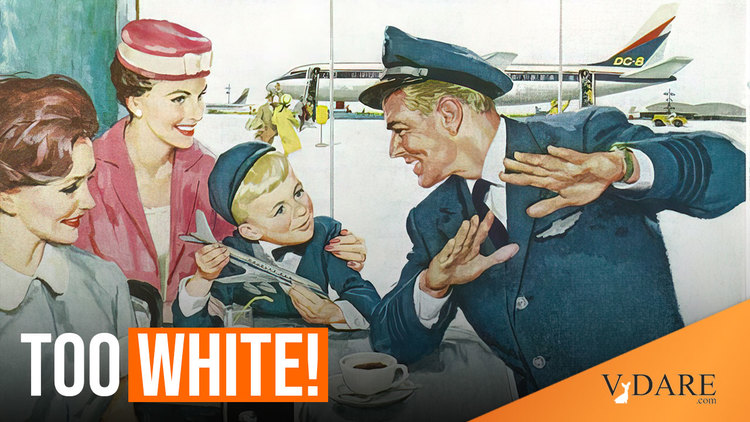 Southwest Airlines Partners With HBCU Because Too Few Pilots Are Black And to think, we thought Idiocracy was a movie. No.

It’s a blueprint for the future.

Southwest Airlines partners with Texas HBCU to recruit future Black pilots: “We do want to have a diverse workgroup. We want to represent not only the customers but the communities we fly to,” Southwest said, by Jason Whitely, WFAA.com, June 1, 2022

HOUSTON — Ever since he can remember, Anthony Pumphrey Junior has wanted to be a pilot. “I blame my dad for this one. I think I made that decision when I was two weeks old. My dad worked for the airlines. The story goes, they threw me in an airplane and I never wanted to get back out since,” he said. Pumphrey flew his first plane at age 8 and now has his commercial pilot’s license as a college freshman at Texas Southern University.

“For me, a lot of times, even today, I look out that window and look down and I’m like ‘whoa,’” he added. Anthony is just the kind of student that Southwest Airlines wants to keep track of. The Dallas-based airline recently announced a partnership with TSU to create a pipeline for new pilots. In school, students will earn a bachelor’s degree, in addition to a pilot’s certificate. Then, after working for smaller airlines, those future TSU graduates can apply at Southwest. Along the way, they are mentored by Southwest pilots.

“There are nine HBCUs with aviation programs. Only three of them own their airplanes. Texas Southern University owns our own airplanes,” said Dr. Terence Fontaine, the director of aviation at TSU. But why Texas Southern? It is an HBCU – a historically Black college or university – and like every airline, Southwest is trying to diversify its pilot ranks. “Well, we know we have work to do and need to do and really and truly want to do from a pilot perspective,” said Lee Kinnebrew, Southwest’s vice president of flight operations.

“We do want to have a diverse workgroup. We want to represent not only the customers but the communities we fly to.” Diversifying the flight deck is not just something Southwest is doing. The majority of all commercial airline pilots today are white men. They make up more than 90-percent of those in this field. Black pilots are scarce and only account for two and a half percent of commercial pilots. Even more rare are minority women.

“Nobody in my family flies so it was kind of a shock to them. My mom tells me “I never thought you’d consider being a pilot” but for me, it was a natural curiosity. I was always curious about space and aircraft and – because it was just so amazing to me,” said Katherine Cabrera, a TSU junior. She is among the students applying to join the Southwest program at TSU.

Last year, United Airlines started a similar initiative with three HBCUs. In February, Delta announced it was doing one, as well. Then in March, Southwest joined TSU. “One day, one day when I’m with my family, I know it’s going to happen. I’m going to be walking down the concourse of some airport somewhere and I’m going to see one of these TSU students,” said Dr. Fontaine. Realistically, it could take close to a decade to go from TSU student to Southwest pilot. But it’s a long play for all involved. The airline will need new pilots in the future and graduates will need a place to land. Southwest says between Texas Southern, military retirees and private flight school graduates, the airline anticipates having a pool of 700 potential pilots in the coming years.

Something tells me railroad stocks will be a hot equity in the years to come.