The state of Oaxaca lies in southern Mexico, far from the US border, nevertheless a number of its residents depend on connections with the United States to survive, and some put on a brave face about their concerns regarding the new president, voiced in Sunday’s Los Angeles Times. 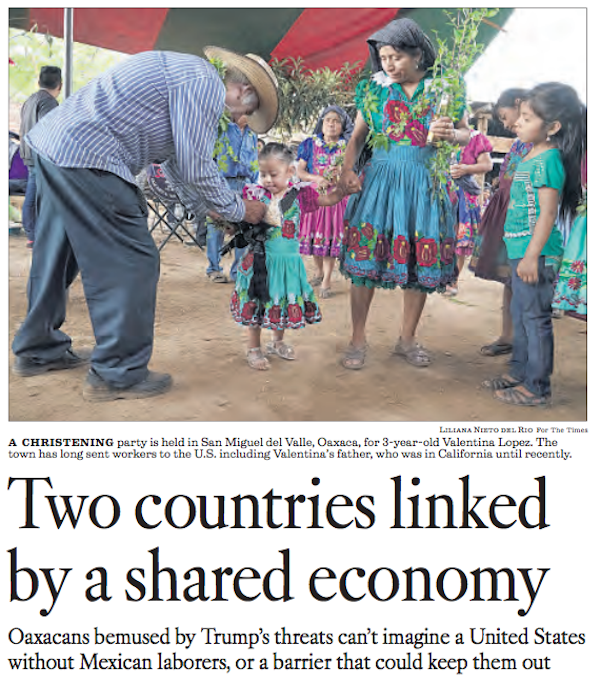 They make a familiar argument from yesteryear: “Who will pick the strawberries?” and seem to think Americans cannot manage without them.

Hardly! The United States won two world wars and became the planetary superpower before millions of Mexicans invaded to “help” us.

Even in the Mexicans’ signature industry of agriculture, automation is coming to the fields and will make immigrant farm labor obsolete before long.

The Times ignores the larger issue that Mexico is rich, consistently scoring around #15 of the world’s nations in GDP ranking. Yet Mexico City feigns poverty in political dealing with its northern neighbor in order to keep its begging hand outstretched. (The US sent wealthy Mexico $560.6 million in foreign aid in 2013.) Remittances from Mexicans residing abroad, mostly in the US, remain a top source of foreign income, nearly $25 billion in 2015. Donald Trump has suggested that he might seize or tax a portion of those billions in order to pay for the border wall, so Mexicans may be squirming over the loss of easy money.

In fact, the best thing that could happen to Mexico would be an end to its dependency on American jobs and dollars by enforcing immigration north of the border. Mexico has great wealth at the top and a growing middle class, but the nation behaves like a poor relation, hoping for more crumbs from the rich uncle.

Donald Trump could help make Mexico average again by enforcing a divorce from the Times‘ “shared economy” and that would be a big improvement for both nations.

Two countries, one economy: A Mexican town whose chief earners are in the U.S. worries what happens if they’re sent home, Los Angeles Times, January 1, 2017

“If this individual came down here to Oaxaca, we would put him to work,” she said. “Let’s see if he can work as hard as the Mexicans in the north.”

Hernandez, a veteran border crosser, having made the journey 18 times, has a brother and son in California.

“What would the United States do without Mexicans?” she posed. “Who else would pick the crops? Who would build the homes?”

Mexico too depends on those crops, those homes.

Its citizens in the U.S. sent back nearly $25 billion last year, its second-largest source of foreign income, after manufactured goods and ahead of oil. Much of that ends up in impoverished rural communities like the ones here in the southern state of Oaxaca, which for decades have dispatched young and old to El Norte in a deep-rooted ritual of economic betterment.

It’s evident in the expansive, half-finished homes dotting the countryside, the Mexican version of McMansions. “They are waiting for more dollars from the north to finish,” people explain.

In the state’s central valley region, lines form daily at banks and money-exchange outlets as people collect cash sent from loved ones.

The cycle of people heading north and money flowing south is so entrenched that no one here can envision it ending. And so while the election of Trump, who has vowed to halt it with a wall along the 2,000-mile border, has spread dismay and apprehension, a more common reaction has been bemusement.

Most everyone in the area appears to have heard of Trump and his threats — his bellicose pronouncements about Mexico have been major news south of the border. But there is a pervasive sense that Trump is bluffing — or will have little appetite to pursue his far-reaching immigration agenda once in office. Or that he will inevitably fail.

“It’s all campaign talk,” Rolando Silvaja Jarquina, a retired teacher, said on a Sunday at a busy market in the courtyard of Tlacolula’s 16th century Catholic church, the Assumption of Our Lady, known for a baroque chapel featuring likenesses of beheaded saints.

Each Sunday, producers of local products, including foodstuffs and handicrafts, descend from ancient hillside settlements to sell their goods in Tlacolula, an animated market town about 20 miles southeast of Oaxaca city, the state capital.

“Both countries, Mexico and the United States, benefit from trade, from immigration,” Silvaja said as a band played in the plaza. “Why would Mr. Trump want to make Mexico his No. 1 enemy? Don’t you want your enemies far away, not next to you?”

The flow of money and people has continued through various waves of deportations and angry vows from U.S. politicians to shut down the U.S.-Mexico border.

“I don’t think this president can stop immigration,” said Liberio Hernandez, 34, a returnee from the United States who was among scores of guests attending a raucous baptism party on a recent morning in the mountain town of San Miguel del Valle. “This has been going on too long.”

The picturesque village, with about 3,000 inhabitants, all of Zapotec indigenous heritage, has a long history of sending young men to the U.S. to work in restaurants as busboys, dishwashers and cooks.

As in many migrant-sending communities, much of the permanent population in San Miguel del Valle consists of women, children and older men — some of whom returned home with their savings after years in the U.S. Many working-age men remain in the north.

“I have so many grandchildren in California — I just hope I get to see them before I die,” said Arnulfo Miguel Lopez, 61, who returned from the north more than two decades ago but has several sons in the Los Angeles area. “It’s not so easy now for people to come back and visit.”

Some villages trace the migratory tradition to the U.S. bracero program, which sent hundreds of thousands of Mexican laborers to the U.S. as legal guest workers from 1942 to 1964. Residents recall fathers and grandfathers who headed off to a then-mysterious north, returning with stashes of dollars.

In many cases, that legal traffic morphed into massive illicit immigration. But tens of thousands of Oaxacans and other Mexican nationals ultimately gained legal status through the Reagan administration’s landmark amnesty program, passed in 1986.

Because of Oaxaca’s longtime links with the U.S., the state has developed a strong cross-border trade in regional products, from foodstuffs like cheese and spicy mole sauce to handicrafts and folk art, including alebrijes, papier-mache sculptures of imaginary creatures. Word of Trump’s threats to slap new tariffs on Mexican products has filtered down to family workshops.

“The tariffs on everything we ship to the north are already very high,” said Luis Leon Monterrubio, who produces a line of mescal, the signature regional liquor distilled from the maguey plant, and exports a good share of it north. “If tariffs got any higher, of course it would hurt our business.”

“Why would the president want less trade anyway? How does that help the United States?” asked Monterrubio as he dispensed generous samples to visitors at his shop along Tlacolula’s main drag.

It has been getting harder to cross the border illegally as U.S. authorities have stepped up enforcement. Fewer people make it back for the holidays, residents say.

Some men interviewed said they had been expelled from the north or gave up trying to get there after being caught multiple times by the Border Patrol.

Federico Lopez, 30, the father of a child being honored at a christening party, said he returned a few years ago.

Lopez spoke as a brass and woodwind band numbering more than a dozen players belted out traditional tunes to celebrate the baptism of his 3-year-old daughter, Valentina, who was decked out initially in a lacy white dress and later in a traditional Zapotec outfit.

Men and women danced in the covered patio of a large home, its construction partially funded with money sent back from the United States. Rain pounded on a makeshift canvas roof.

One after another, the male guests recounted their days in El Norte — and dismissed as quixotic the notion that a president could somehow shut down the historic flow of humanity.

Liberio Hernandez said he had spent more than 20 years in the Los Angeles area and Milwaukee, where his brother still lives, mostly working in Japanese restaurants. He said he became an expert at preparing Japanese-style sizzling steaks at patrons’ tables.

Ultimately, he said, he decided to return in 2011 to be with his family.

“What’s his name, Trump?” asked Hernandez, sipping a beer. “There are too many people from here already in the north, too many more who want to go.”

“People will always find a way to go to the north,” he said. “This Trump can say what he wants, that’s fine, but the reality in  Oaxaca is what it is. The men here go to the north to better themselves, to help their families here. No wall will stop them