Albinos come in for particular abuse in Africa. In some places, adults and children are hunted down like animals to be chopped up for sale to witch doctors. Their unpigmented skin is highly valued as an ingredient for spells, potions and good luck charms to bring wealth. (See my blog Canadian Takes On Tanzanian Slaughter and article Diversity Is… Witchcraft.)

Criticism of the practice pushed Tanzania into prosecuting some of the killers last year, but the trial was stopped part way through because of ”lack of funds.” 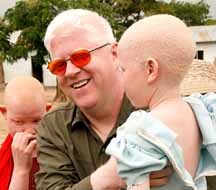 One of the critics has been Canadian Peter Ash (pictured), an albino himself who has campaigned against African brutality against non-pigmented persons. He visited Tanzania earlier this year and conditions appeared unchanged:

When people passed by their home, she heard them shouting ”dili dili” -— the Swahili word for ”deal” – a reference to the lucrative profits they could make by selling her body parts to witch doctors. It’s a word that Tanzania’s albinos hear every day.

On the night of Feb. 7, a machete-wielding man crept up to her hut in darkness. When she stepped outside, carrying her infant daughter on her back, the man slashed viciously at the baby, trying to sever her leg. He pursued them into the hut, slashing Ms. Khalfani on the forehead, leaving her with blood pouring over her face.

It was the 60th reported attack on Tanzanian albinos since 2007. It was followed by two more attacks this month, including the killing last Sunday of a four-year-old girl whose right arm and leg were chopped off. At least 56 albinos have been killed in the attacks, and many more are believed to have died in unreported cases.

Another country where atrocities occur is Burundi, as a recent news story explained:

Attackers in Burundi chopped off the limbs of a 5-year-old albino boy and pulled out his mother’s eye, killing them over the belief that their body parts would bring wealth and success, human rights activists said Friday.

Those deaths and other recent attacks in Tanzania are part of long pattern of violence against African albinos. At least 10,000 have been displaced or gone into hiding since attacks against them spiked in late 2007, the International Federation of the Red Cross says.

Since then, 57 albinos have been killed in Tanzania and 14 in Burundi, said Vicky Ntetema with the rights group Under The Same Sun.

The killings are fueled by superstitious beliefs that human albino body parts will bring others wealth and success, Ntetema said.

”Body parts are sought for their supposed miraculous powers,” she said. ”Some use them as human sacrifice as advised by witch doctors.”

Despite the human rights horrors that occur in Burundi and Tanzania as part of their cultures, the US State Department welcomed more than 300 from the two nations in its 2010 Diversity Visa Lottery.

According to the all-knowing liberal nanny state, diversity is the highest good and we little citizens should get used to that ideology to survive the glorious one-worlder paradise.