"Someone Who Makes Dogs Bark at Night": Curtis Lavelle Vance Guilty on All Counts in Anne Pressly Rape-Torture-Murder Trial

My reader David just sent me the good news, for which I thank him. 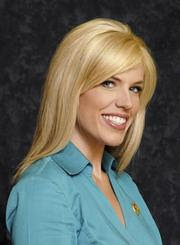 LITTLE ROCK — A jury on Wednesday found Curtis Lavelle Vance guilty on all counts in the death of anchorwoman Anne Pressly. Jurors took just a few hours to decide the Marianna man's guilt.

Vance, 29, was found guilty to capital murder, rape and burglary charges in an Oct. 20, 2008, attack so brutal that Pressly’s mother didn’t recognize her when she rushed to the anchorwoman’s aid.

The court went directly into the penalty phase….

In closing arguments at the trial of the man charged with killing Pressly, a prosecutor described the suspect as ‘someone who makes dogs bark at night.’

“He made this person look like this,” deputy prosecutor John Johnson said, holding up a KATV publicity shot and a photograph taken during Pressly’s autopsy. A medical examiner had testified Tuesday that the front of Pressly’s face was broken “like an egg.”

On a tape played for jurors Monday, Vance told a police detective that he beat Pressly with a piece of wood that he found in her backyard — but never explained why. “I lose control, she lose control,” Vance said in the February interview.”

Vance’s defense attorney, Teri Chambers insisted, “This evidence means nothing. You cannot base a conviction on it.”

David reports that the jury took only two hours to return guilty verdicts. Such decisiveness in the verdict phase notwithstanding, considering that four jurors are black women, I rate Vance as having a zero percent likelihood of getting the death penalty, but hope that the jury will surprise me. 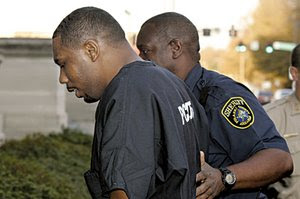 The racist rapist-murderer, entering the courthouse