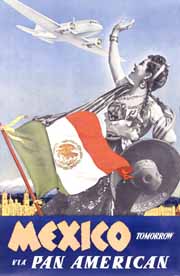 The liberal press and others stuck on questionable victimhood have been eyeing a massive run for the border of Mexicans fleeing drug violence. In 2009 I commented about the Texas strategy for that possibility: Texas Government Plan For Massive Mexican Invasion: Immediate Surrender.

MEXICO CITY – About 230,000 people have been displaced in Mexico because of drug violence, and about half of them may have taken refuge in the United States, according to a new study. [...]

”Independent surveys put their number at around 230,000,” according to the global report’s section on Mexico. ”An estimated half of those displaced crossed the border into the United States, which would leave about 115,000 people internally displaced, most likely in the States of Chihuahua, Durango, Coahuila and Veracruz.”

How interesting. Half of Mexicans who relocated to escape cartel violence moved within Mexico. Persons with crime problems do NOT need to illegally enter the United States, because opportunities for safety still exist within Mexico.

The Refugee Industrial Complex is certainly looking south for future clients but their concern is to maintain their cushy jobs, period. See Plan to overload the asylum system at southern border from Refugee Resettlement Watch for observations on that topic.

In fact, even the Los Angeles Times has reported on Mexicans coping within Mexico: the capital city is now considered a safe area.

Traffickers are aware of the risks of major provocations in Mexico City, home to the federal police, army, navy and intelligence services, not to mention many of the cartel leaders’ families.

When the highway shootouts and roadblocks by gunmen in her hometown finally became too much, Karla Garza found sanctuary in the unlikeliest of places: the big, bad capital, Mexico City.

Garza, a 21-year-old marketing student, switched campuses in December after her parents decided that even with its rampant robberies and kidnappings, Mexico City was safer than their home in Monterrey, a once-quiet northern city that for months has served as a battlefield for warring drug gangs.

”Ten years ago, my parents never would have imagined sending me to live in [Mexico City]. It would have been insane,” Garza said. Now, though, ”the bad news is coming from Monterrey.”

Mexico City used to be an emblem of runaway crime, viewed by many Mexicans as a viper pit that was best avoided if you didn’t want to be mugged or forced at gunpoint to withdraw money from ATMs and hand it over. But four years of drug violence across much of the rest of the country suddenly has Mexico City looking like an island of tranquillity, despite its rampant petty crime.

Not yet, at least. The winds have been known to shift quickly in this drug war, and metropolitan Mexico City, with 20 million residents, is hardly free of cartel activity.

But drug traffickers are aware of the risks of igniting major provocations in a city that is home to the federal police, army, navy and intelligence services, not to mention many of the cartel leaders’ families. And Mexico City’s size and complexity are a barrier to control by any one crime boss.

Stakes are also high for authorities. Gun battles amid high-rise offices and stately monuments of Mexico’s political and economic hub would be a disaster for President Felipe Calderon, who launched his offensive against organized crime in December 2006.

Even so, several mass killings in and around the capital recently have stirred worry that the extreme violence besieging other zones may be nibbling at the edges.

On Feb. 13, a crowd on a graffiti-spattered street corner in a scruffy, crime-ridden suburb called Nezahualcoyotl was sprayed with gunfire; seven people were killed. A month earlier, gunmen killed nine people and wounded three in another incident in the same city, which has long been known as one of the most violent spots in the area.

The area around Nezahualcoyotl in Mexico state has a high homicide rate, with more than 1,500 slayings in the last four years, according to federal government figures. (Mexico City’s total is a little less than half that, or 653 through December.)

Authorities say the shootings apparently stemmed from internal disputes over street drug sales in a group linked to La Familia cartel, a violent gang based in nearby Michoacan state. Nezahualcoyotl Mayor Edgar Navarro Sanchez called the slayings ”isolated incidents,” but he acknowledged that La Familia has operated in the city for several years.

In the bleak neighborhood where the Feb. 13 slayings took place, fearful residents lock their children indoors and hope the latest killings aren’t the start of a frightening new phase.

”It’s very delicate and very dangerous,” said Mariana Gonzalez, a 30-year-old homemaker who was passing the street corner, still stained dark with blood. She said the victims were known for selling drugs.

Gonzalez said residents lately have seen carloads of armed men and leaflets warning of ”massacres” to come. The neighborhood, hemmed on one side by a cemetery and railroad tracks, has long been beset by gang crime.

”But shootouts with many dead, no,” she said.

Without firing a shot, the troops arrested a man suspected of laundering money for the Zetas gang. But the scene of masked commandos evoked images of troubled cities, such as Ciudad Juarez, where Calderon has deployed the military as part of his 4-year-old offensive against drug cartels.

It has long been an open secret that traffickers own mansions, manage drug shipments, launder money and stage cocaine-fueled parties in the same leafy precincts that house Mexico City’s law-abiding rich and famous.

Federal police have arrested numerous suspects in the capital, including family members of top drug figures. Edgar Millan Gomez, the No. 2 official in the federal police, was assassinated at his home here in 2008.

But amid Mexico City’s choking sprawl and disorder, it can be easy to hide in plain sight.

After the arrest of suspected kingpin Sergio Villarreal Barragan in September, Gallo, the anti-crime activist, said he and neighbors were stunned to learn that Villarreal had been renting a house in their gated community. Guards had watched the suspect come and go for months. ”No one realized we had a huge criminal as a neighbor,” Gallo said.

The city also serves traffickers in other ways. Benito Juarez International Airport is a strategic relay point for smaller-scale shipments of drugs smuggled north toward the United States. The crime-plagued Tepito neighborhood is a hungry market for street sales of cocaine and marijuana.

But Miguel Angel Mancera, Mexico City’s top prosecutor, said the array of security forces, including the 75,750-strong local police force, and a tighter command structure than in many states, ”makes it difficult for them to operate.”

Some analysts say rising drug use in Mexico is likely to produce more violence, and that could extend to the capital, a huge market. Mexico City would also offer a juicy target if traffickers decided to make a political point by unleashing violence.

Mexico City’s mayor, Marcelo Ebrard, and the Mexico state governor, Enrique Pena Nieto, share a keen political interest in making sure the region doesn’t descend into extreme violence. Both are expected to run for president next year, and neither can afford gangland mayhem on his home turf.

But if not, Garza said, she might not be alone in the capital for long: The next to seek haven in Mexico City may be the parents who sent her here.