Apparently the “better life” foolishly offered to Somali immigrants by the United States is not highly valued, since members of the tribe are still exiting to pursue the goal of worldwide Islamic rule.

In addition, Minnesota has been the site of trials of Somalis for supporting terrorism, such as the two locally residing Somali women found guilty of aiding al-Shebaab a year ago and the more recent guilty verdicts of Mahamud Said Omar for helping jihadists return to their homeland. So they know that jihad behavior is not accepted.

Why does Washington continue to admit a group that is violent and actively hostile to our values? There are plenty of nice non-Muslim people around the world who would be decent immigrants, if the nation really needs more people at a time of so much unemployment (we don’t).

Some Somali residents of the US would rather travel to Somalia and shoot up the place as shown below rather than engage in positive lifestyles in America. 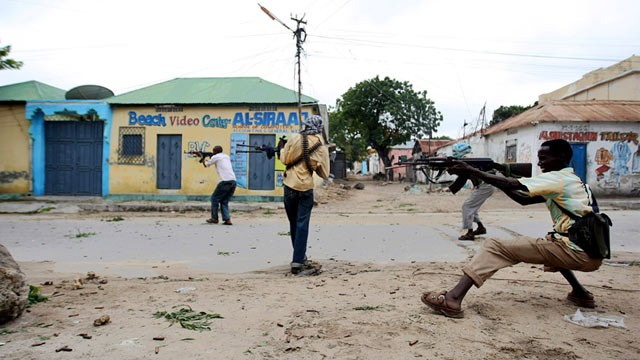 Young American men continue to slip through a terrorist recruiting pipeline from the homeland to join the ranks of jihadists half a world away in East Africa, with two going as recently as three months ago, according to federal officials.

The FBI confirmed a report by Minnesota Public Radio (MPR) that in July two young men disappeared from their neighborhoods in Minneapolis and are believed to have traveled to Somalia to join al-Shabaab, the embattled al Qaeda-affiliated terrorist group.

Under “Operation Rhino,” for years the FBI has been investigating what has been described as a recruiting pipeline from the Twin Cities, which boast large Somali immigrant populations, to Somalia. Both top U.S. officials and at least one prominent member of al-Shabaab said Americans account for dozens of the terror group’s fighters. A 2011 Congressional report put the number around 40.

“Minnesota represented!” writes American-born rapping jihadist Omar Hammami in an autobiography posted online in May, though he claimed most of the U.S. recruits were already dead. “Those Minnesota brother[s] have almost all left their mark on the [jihad] and most have received martyrdom, while the rest are still waiting.”

Kyle Loven, chief division counsel for the FBI’s Minneapolis field office, said recruits going to Somalia from Minnesota “continues to be a matter of grave concern and the FBI remains fully committed to resolving this situation.”

The FBI said that in the recent case, two young Minnesota men, 19-year-old Mohamed Osman and 20-year-old Omar Ali Farah, left their homes for their trek to Somalia in mid-July. Osman’s family told MPR he was religious, but they were stunned when he disappeared.

“It made me mad because he didn’t speak to no relative about it,” Osman’s cousin, Jamal Salim, said. “We’re heartbroken about it because he’s like our sibling. Imagine not knowing what’s going on with your own brother — how he’s been feeling, who he’s been talking to, and what they’re telling him. We lost a brother, and I don’t know how to get him back.”

Earlier this month some details about how exactly young men are recruited for jihad emerged during the federal trial of a man who was convicted of recruiting more than 20 fighters for al-Shabaab in America in 2007, according to The Associated Press.

At the trial of Mahamud Said Omar, three former recruits who had survived their trip to Somalia only to return to the U.S. testified that they were talked into fighting by charismatic, devout older men who promised paradise for those who died in combat against “invaders.”

Al-Shabaab has suffered several recent defeats at the hands of African military forces and lost its final urban stronghold in Somalia earlier this month. But Western and Somali security experts told ABC News they are concerned such defeats may tempt the terror group into abandoning insurgency in Somalia for a renewed focus on international terrorism.

An African Union official said there is worry that the same fighters driven out of Somalia could launch attacks abroad, from Kenya and Uganda to the U.S.

During Congressional testimony in January, Director of National Intelligence James Clapper listed al-Shabaab as one of the most significant terror threats to the homeland, in part due to a “foreign fighter cadre that includes U.S. passport holders… [who] may have aspirations to attack inside the United States.”

U.S. Special Representative for Somalia James Swan told reporters last month that al-Shabaab’s recent loses caused some of the terror group’s foreign fighters to flee, but Swan did not know if that meant they were abandoning jihad or simply heading to a different al Qaeda-affiliated group in another country such as Yemen.