Such crimes are partially the result of Washington’s inexplicable infatuation with third-world immigrants and the associated belief that immigration is a glorious process that celebrates humanity. Down at ground level however, relocating a family to a totally different society is one of the most stressful actions one can take.

The normal anxiety that people experience in a tough economy is multiplied for foreigners when they don’t understand the language or know the ropes. When luck turns bad, a parent may snap or act very stupidly toward the children who have constant needs whatever the family circumstances. 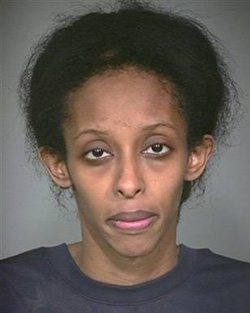 The most recent tragic tale concerns the asphyxiation of two children who were stuffed into a small closet with two other siblings by their mother Ebyan Farah, a Somali immigrant, when she left home for more than 10 hours.

The press has been full of stories for years about the backward nature of Somalis and how they must be taught how to work a light switch or door knob. (Reporters apparently think that such details add a positive note reflecting the wonders of diversity and may not understand how horrified some readers are to learn of the primitives thrust into their communities. See Cliff Notes Assimilation for Somalis.)

How retrograde was the Somali mom after residing in the United States for a decade? Did she believe that closets were clever American inventions for stashing children?

Her behavior was bizarre by American standards, but then she is a Somali.

Indianapolis — The mother accused of neglect for locking her five children in a bedroom closet pleaded not guilty Thursday. Two of those children died.

Dozens of members of the local Somali community were in court to hear about the eight felony charges that have been filed against 28-year-old Ebyan Farah in connection to the deaths of two of her children, ages 3 and 4. Charges include criminal confinement and neglect resulting in death.

”We did not charge murder, so this is not an intentional killing,” said David Wyser, Marion County deputy prosecutor. [. . .]

According to court documents, Farah locked her children in the closet at 6:00 am Sunday morning and didn’t get them out for more than 10 hours at 4:20 in the afternoon. That entire time they had no food, water or adequate ventilation.

After finding the dead children, Ebyan Farah told her uncle, ”I did something wrong,” and then began crying.

But according to her seven-year-old daughter who survived the ordeal, this was not a one-time event. She told a social worker her mother ”often placed her and her brothers and sisters in the closet for punishment or when she needed to cook.”

The deaths are another diversity tragedy. The crime could have been prevented if America’s public policy had a more realistic attitude about human nature and didn’t import such radically different people to dump into our towns and cities.

The courts will find Farah insane, which is more socially acceptable than the more accurate verdict: Inappropriate Immigrant. She will be institutionalized at great cost to the taxpayer, and nothing will be learned.