Funny how there has been little or no television coverage of this story. Mass-murdering moms generally get a lot of attention from mainstream media, which increasingly dwells on shocking crimes for their easy explanation and emotional punch. Perhaps MSM types are made uncomfortable by the citizenship status and ethnicity of this alleged killer, Angelica Alvarez, who used gas to asphyxiate her four kids by two fathers in Elkhart, Indiana. [ Mother is charged in kids' deaths, Chicago Tribune, November 23, 2006] 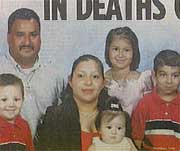 Elkhart Circuit Judge Terry Shewmaker ordered her jailed without bond. He also ordered that she be examined to make sure she is competent to stand trial. Hill said earlier he had no reason to believe she wasn't.

Lopez had told the South Bend Tribune that he met Alvarez in Mexico and that they lived in Lazaro Cardenas, a city in the state of Michoacan. A decade ago, Lopez and Alvarez moved to Goshen, a town near Elkhart where Lopez had family.

Shewmaker asked Alvarez through a translator Wednesday at the courthouse in Goshen whether she was in the country legally. She said no.

People who know the family say that Alvarez was depressed from losing her job. It cannot be easy to live in a strange country where you don't speak the language and live alienated from the mainstream community. Multicultural cheerleaders like to downplay how psychologically difficult immigration can be, even under the best of circumstances. In this instance, the addition of a life-stressing job loss to living outside the law may have been the last straw for Angelica Alvarez.

Terrible crimes like this one should be a reminder that we do uneducated illegal aliens no favors by allowing them to remain in a society that requires more skills than they have.

Immigrant crimes of rage and frustration, e.g. the SUV jihad in San Francisco and the Somali mass murder in Kentucky, surely have some causal basis in the interior culture clash that adult immigrants experience.

However, psychologically complex stories of foreigners going postal don't fit into the press' favorite parable of plucky immigrants achieving the American Dream, so disturbing crimes like that of Angelica Alvarez are largely ignored.