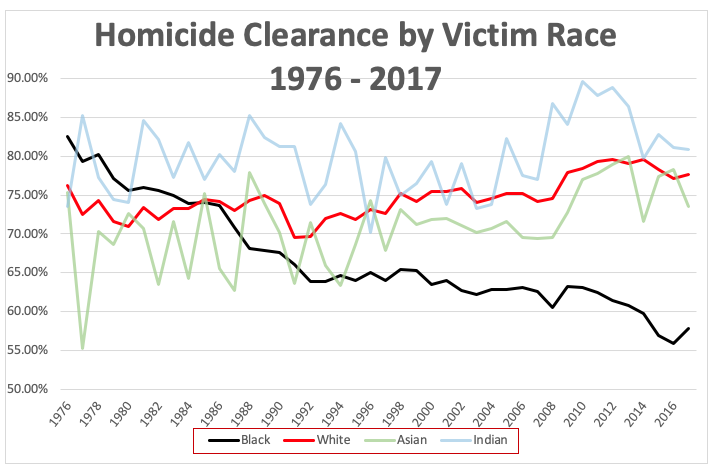 Homicides are “cleared” by the police when the case is no longer open and unsolved. Homicide clearance rates should be increasing over time due to improved technology such as DNA, video, and cell phones as tracking devices.

For most groups in America, this has been somewhat true over time. But clearance rates for homicides with black victims have dropped from over 80% in the mid-1970s to under 60% during the Ferguson Era, according to this graph from the Murder Accountability Project: Tracking America’s Unsolved Homicides.

Black murders accounted for all of America’s clearance decline

Declining homicide clearance rates for African-American victims accounted for all of the nation’s alarming decline in law enforcement’s ability to clear murders through the arrest of criminal offenders, according to a new study of data compiled by the nonprofit Murder Accountability Project (MAP). …

From an MAP report:

This finding is troubling in that it undercuts – at least somewhat – suggestions that the racial disparity can be attributed to rising levels of gang- and organized-drug activity in major cities. These problems do not occur evenly throughout the nation. That declining clearance rates for black murders have occurred in rural America is especially troubling. Historically rural America enjoys the nation’s most robust clearance rates since law enforcement is in a position to
implement everybody-knows-everybody community policing. But rural police increasingly struggle to solve black murders at much the same rate as urban authorities.

Black victim clearance rates are worst in big cities over 250k: 53% in this decade. But they don’t get that much better in smaller towns. In contrast, when a white person is murdered in a rural area or a town under 10,000 people, the cops’ clearance rate lately is just under 90%.

Some of this decline was probably that the cops less often beat confessions out of suspects.

Jill Leovy’s Ghettoside documents the significance of witness-murdering in South-Central Los Angeles in keeping murders from being cleared.

One implication is that if homicides with black victims are now about a 1/3rd less likely to be cleared than homicides with non-black victims, what does that imply for the Obama Administration’s Bureau of Justice Statistics’ 2011 finding that blacks were about 7.6 times more likely than whites/Hispanics to be “homicide offenders”?

A popular theory would be that most of these black victims with uncleared murders were murdered by roving lynch mobs of white MAGA-hatted smirkers in league with the homicide detectives.

A more realistic assumption is that most of the black victims whose murders are uncleared were murdered by fellow blacks. If true, this would make the ratio of homicides committed by blacks relative to non-blacks even higher.

By the way, isn’t it about time for the Trump Administration to get its Bureau of Justice Statistics to publish some updated reports on homicide? The most recent on the BJS’s homicide web page dates to 2014, before the Late Obama Age Collapse. Without Official Government Reports to cite (e.g., Rotherham), journalists tend to not touch unfashionable realities, such as the shocking rise in murder in the two years following the Establishment’s Meltdown over Ferguson. The last full Homicide report from the BJS dates to 2011.