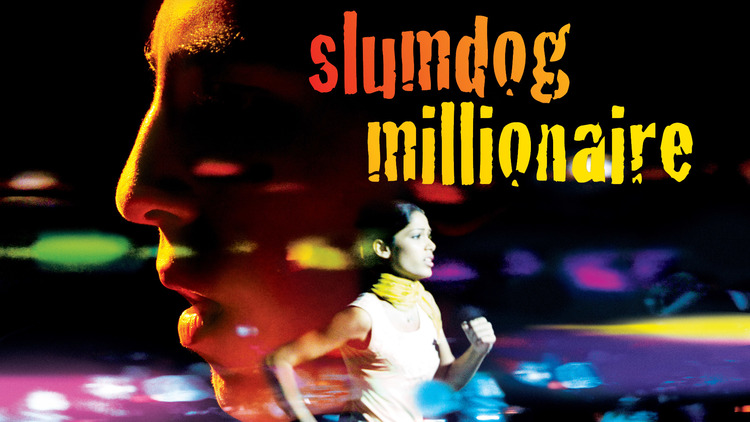 Traditionally, I post on iSteve teaser excerpts from my movie reviews when I write them, then post the whole thing here months later after the DVD comes out. So, here's last winter's full-length American Conservative review of the Oscar Best Picture-winner "Slumdog Millionaire:"

After sweeping the Golden Globe awards, ”Slumdog Millionaire,” the plucky movie about an uneducated underdog from the slums of Bombay who wins 20 million rupees on the local version of the quiz show Who Wants to Be a Millionaire, has become the Oscar race overdog.

Seven-year-old Jamal and his older brother Salim are orphaned in 1992 when Hindu nationalist mobs torch their Muslim slum in Bombay. (Or ”Mumbai,” as the Shiv Sena politicians who fomented these pogroms renamed the city in 1996. Although trendy Westerners all use ”Mumbai” now, no locals call their famous film industry ”Mullywood.”)

In their Dickensian struggle to survive, the brothers, along with a pretty foundling girl named Latika, scavenge in a vast garbage dump. They are lured away to an ”orphanage” run by a Fagin-like impresario of child beggars who blinds his best prospects to make them more pitiable. Fortunately, they escape to peddle snacks on India’s famous trains and guide gullible Western tourists around the Taj Mahal. As adolescents, they finally make it back to Bombay to try to rescue Latika from the pimp. Salim becomes a hit man, while Jamal sticks to humble but honest work.

Six years of economic growth later, Jamal, now delivering tea in an outsourced call center, finds Latika enslaved as the moll of his brother’s mob boss. (I suspect this plot twist was hoary when Jimmy Cagney was young …) To make enough money to run off with his beloved, Jamal goes on Who Wants to Be a Millionaire. There, as fate, karma, or kismet would have it, he finds he knows the answer to each trivia question because it had already come up at a memorably dramatic moment in his life.

Jamal’s run of good fortune entrances India, but the evil game show host (who resembles a subcontinental version of comedian Dennis Miller), doesn’t care about his booming ratings. Before the final round, he has Jamal arrested and tortured to find out how he’s cheating. By recounting his life in flashback, Jamal convinces the police captain of his true-heartedness and returns for the final showdown question.

Unfortunately, ”Slumdog’s” success in the year-end awards largely reflects a lack of competition. The film contains, in theory, most of the elements of a crowd pleaser, but the actual product turns out to be less enjoyable to watch than a good episode of Who Wants to Be a Millionaire.

One problem is aesthetic. The specialty of eclectic British director Danny Boyle (”Trainspotting”) is cranking the kinetic energy onscreen up to 11. He revitalized the zombie genre with ”28 Days Later” by having the rotting undead sprint after their terrified prey like Usain Bolt. Granted, turbocharging dilapidated zombies didn’t make much sense, but it was exciting. Similarly, Boyle’s directorial razzmatazz made a young lad’s life in an English exurb look eventful in the underrated ”Millions.”

Bombay, however, doesn’t need to be juiced with the latest video fads. As Salman Rushdie has noted, Indian cities induce sensory overload (most famously conveyed by the bravura opening chapter of Kipling’s Kim). A more stately approach, such as David Lean’s in ”A Passage to India,” would have been more watchable. Boyle comes up with one useful innovation–floating subtitles onscreen next to the character speaking (about one-third of the dialogue is in Hindi). Overall, though, the combination of the teeming masses of India’s ”maximum city” and Boyle’s zap-pow digital dynamics is exhausting.

Worse, the script is as on-the-nose as the dog comedy ”Marley and Me.” Sadly, Boyle and screenwriter Simon Beaufoy didn’t trust their gimmick. Who Wants to Be a Millionaire has been a hit around the world because its slow pacing (the opposite of Jeopardy!) allows viewers to think along with the contestant as he talks out his thought processes. Thinking is fun.

”Crash” (an equally contrived but more interactive film) allowed viewers a half minute to rewind the plot in their heads and figure out for themselves the climactic conundrum of why nobody was killed when the angry Iranian shot the Mexican locksmith’s angelic daughter at point-blank range.

Sadly, ”Slumdog Millionaire” doesn’t encourage any thinking about earlier scenes. Instead, each quiz question is followed by a lengthy flashback ending with The Answer. For example, after ”Who invented the revolver?” comes Jamal’s recollection that concludes with his gangster brother waving a gun around and shouting, ”The man with the Colt .45 says shut up!”

Rated R for some violence, disturbing images and language.