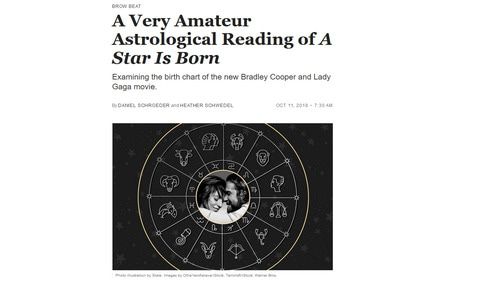 SLATE: Astrology Is In!

A Very Amateur Astrological Reading of A Star Is Born 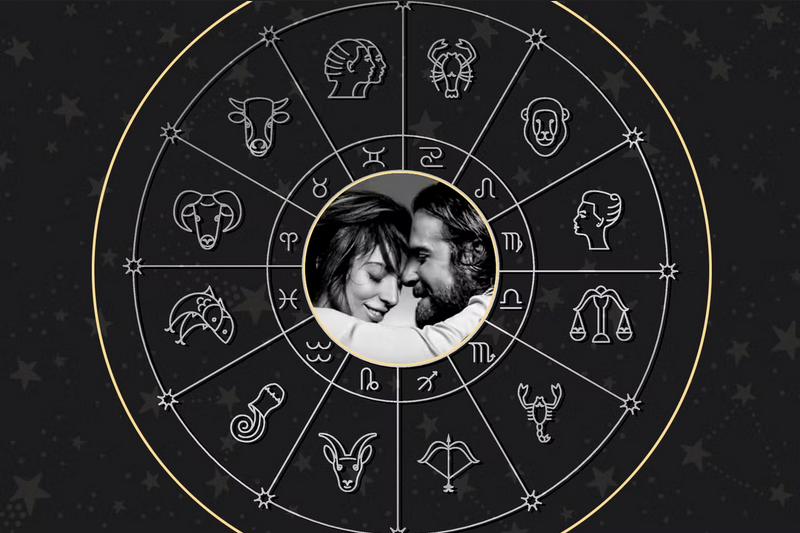 Examining the birth chart of the new Bradley Cooper and Lady Gaga movie.
By DANIEL SCHROEDER and HEATHER SCHWEDEL

A Star Is Born is the most important film event of the year, but thus far its resonance with that other important 2018 cultural touchstone, astrology—newly in vogue thanks to millennials, the internet, and perhaps the terribleness of the rest of the world—has gone unremarked upon. That ends now. Stars, birth … obviously A Star Is Born is just calling out for an astrological reading. Slate staffers and amateur—very amateur—astrologists Daniel Schroeder and Heather Schwedel decided to call up the movie’s birth chart in order to mine it for celestial insights that other critics and prognosticators may have missed.

Keep in mind that the astrological theme is being played, sort of, for laughs as a way to get some more clicks to a tired staple of online journalism content generation: two staffers talk about a movie they saw over the weekend.

But this reminds me of an observation I tweeted a month ago:

What’s going on at Slate?

It always used to be run by smart Jewish guys, like Kinsley, Weisberg, and Plotz. Now they’ve got, I think, a gentile lady editing it. It seems pretty successful, but it’s not very interesting for smart males anymore. More of a Woman’s Magazine now.

The ladies of Slate responded with a collective “Well, I never!” at the idea that Slate is now, more or less, a Woman’s Magazine. I added:

Slate was founded in the 1990s by IQ-fanatic Bill Gates to give Michael Kinsley, the most influential high-end opinion journalist of his generation, a platform. Next couple of editors, Weisberg and Plotz, were Kinsley Klones.

Now, tho, Slate is kind of a Ladies Magazine. …

There’s nothing wrong with the new Slate going downbrow to pursue the huge women’s market — advertisers love the ladies! — but for guys of a certain age and IQ, it’s hard not to be a little nostalgic over the old Slate edited by Mike Kinsley and paid for by Bill Gates. …

In defense of Slate’s ladies, they didn’t fall near as hard for Sabrina Rubin Erdely’s Rolling Stone UVA gang rape on broken glass hoax as 98% of the media.

In defense of the new mass market Slate, they’ve probably maintained more of their dignity than The Atlantic: E.g., Slate’s Jamelle Bouie must have 20 IQ points over Atlantic’s Ta-Nehisi Coates. …

Right. Women have to take their personal lives more seriously, for evo psych reasons, so they don’t have as much time for more impersonal interests. So they end up reading a lot of Beyonce’s Baby stuff, which is the female equivalent of Who’d Win In a Fight: Superman or