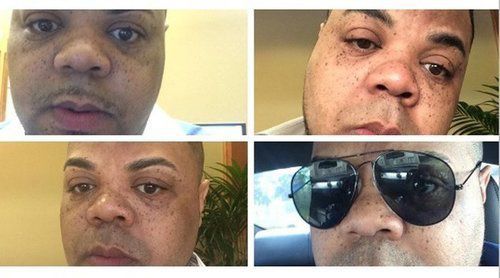 In one sad sense there was nothing new, or even very unusual, about the televised killing of two journalists in Virginia on Wednesday morning.

I’ll put the rest below in case you want to perform amusing CTRL-F text searches upon it:

Death on TV has occurred with frightening regularity ever since the advent of the medium: Jack Ruby’s shooting of Lee Harvey Oswald, the assassination of President John F. Kennedy, in 1963; and the Sept. 11, 2001, fall of the World Trade Center. The prospect of death appearing suddenly on our screens is as common as it is ghoulish.

Yet in another way, the video of the Virginia shootings posted by Bryce Williams, whose real name is Vester Lee Flanagan and who is thought to be the gunman who killed two of his former co-workers at the television station WDBJ, is a frightful twist in an age of online sharing and ubiquitous video documentation.

The killings appear to have been skillfully engineered for maximum distribution, and to sow maximum dread, over Twitter, Facebook and mobile phones. The video Mr. Williams shows is an up-close, first-person execution. It was posted only after his social media accounts had become widely known, while the police were in pursuit of the killer. And unlike previous televised deaths, these were not merely broadcast, but widely and virally distributed, playing out with the complicity of thousands, perhaps millions, of social networking users who could not help but watch and share.

The horror was the dawning realization, as the video spread across the networks, that the killer had anticipated the moves — that he had been counting on the mechanics of these services and on our inability to resist passing on what he had posted. For many, that realization came too late. On these services, the killer knew, you often hit retweet, like or share before you realize just quite what you have done.

Twitter and Facebook moved quickly to suspend the accounts of Mr. Williams. But not quickly enough. By the time his social presence had come down, his videos had been shared widely by journalists and ordinary users, jumping beyond the Internet onto morning TV broadcasts, and downloaded and reposted across the Internet — where, with some rudimentary searching, they will most likely remain accessible indefinitely.

Also found after the killings was a demo reel posted to YouTube, showing Mr. Flanagan’s various appearances as a TV news anchor and reporter. It is unsurprising, given his familiarity with the subject, that he appeared well versed with what has become the media ritual of killing.

He seems to have known, for instance, that in a nation in which tens of thousands of people are killed by firearms every year, the shooting of two people would not become international news if it was not filmed: as is commonly said online, “Pics, or it didn’t happen.” So he waited until WDBJ’s cameras were broadcasting live before he acted.

But as a newshound, he seems also to have understood the morbid irresistibility of the citizen-produced video — the shaky, point-of-view, ground level, continuously looped recording of any incident that has become a commonplace spectacle on television news. Thus, he made sure to produce his own video as well. In the practice of our mobile age, he held his camera vertically, in one hand, allowing him to hold his gun in the other.

He might have anticipated, too, that in any widely covered shooting, reporters now rush to do an Internet search on the killer as soon as a name leaks out. Mr. Williams was ready, his social accounts prepared with a professional picture and childhood photos. Then, as soon as his name began to be mentioned online, he appeared to have logged in to Twitter and Facebook to begin posting the outlines of a defense and an explanation, as well as his own clip of the killings.

There was initially some doubt on Twitter about the authenticity of the killer’s account — justified skepticism, because the quickly pulled-together profile of a shooter has also become a hallmark of the ritual in which these incidents are covered. But then the killer’s account, @bryce_williams7, began updating live, erasing all doubt.

Over the course of 20 minutes on Twitter, the shooter updated his status a half-dozen times, culminating in a post showing the video of the killings. He quickly amassed a following of thousands, the sort of rapturous social media welcoming that is usually reserved for pop stars and heads of state.

There was uncertainty in the sharing. Users expressed reservations as they passed on the gunman’s profile and his tweets. People were calling on Twitter and Facebook to act quickly to pull down his accounts. There were questions about the journalistic ethics of posting WDBJ’s live shot and the killer’s own document of the shooting, given that it was exactly what he had been expecting.

But these questions didn’t really slow anything down, a testament to the power of these networks to tap into each of our subconscious, automatic desire to witness and to share. The videos got out widely, forging a new path for nihilists to gain a moment in the media spotlight: an example that, given its success at garnering wide publicity, will most likely be followed by others.