A sizable gaggle of illegal aliens and their lefty pals gathered on Saturday to protest the competent immigration enforcement of Sheriff Joe Arpaio in Maricopa County. You might think that a wise strategy would have been the sob-story appeal with lots of tearful kiddies that Mexes use so frequently.

Instead, some paraders were decked out in Aztec drag — not the most friendly message, although no human sacrifices were performed that we know of.

Do the protesters pictured below look like immigrants or invaders with an anti-America cultural agenda? 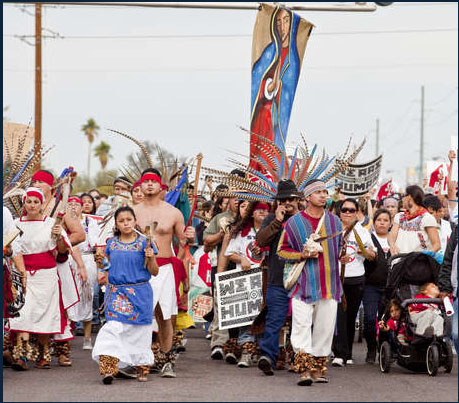 Though the scene of the disturbance was cleared within minutes, the aftermath was chaotic. Protesters yelled obscenities at police officers in riot gear. One officer shook his pepper spray canister as he ordered people to keep moving. One protester wore goggles, and several others wrapped bandanas around their mouths.

Critics have accused deputies working in Arpaio's immigration efforts of racial profiling, which the sheriff denies. He says his deputies approach people when they have probable cause to believe they had committed crimes.