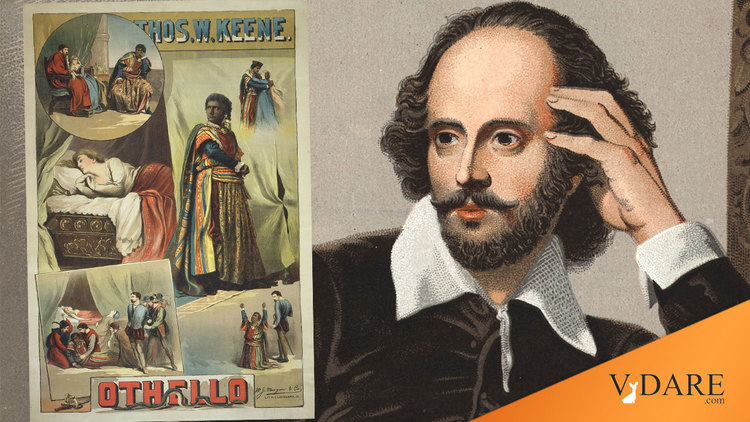 I once read a scholarly biography of Shakespeare, which made for an odd experience since we know a fair amount about Shakespeare from property records and the like — England having enjoyed careful registration of deeds and contracts for many centuries (perhaps more careful, it appears, than in 21st Century America) — but none of it shedding much light on what we're most interested in: how Shakespeare came to write his plays.

Perhaps not surprisingly, considering the paucity of contemporary comment on Shakespeare as a writer, a couple of centuries later various people began to argue that somebody else must have written Shakespeare's plays. As Mark Twain, an early doubter that Shakespeare wrote Shakespeare, pointed out, there's very little contemporary record (at least still remaining) of anybody noticing Shakespeare's retirement or death.

On the other hand, there's even less contemporary comment from the early 17th Century suggesting anybody else wrote them.

The truth is that there is always an absolutely colossal amount of popular culture, the vast majority of which is almost quickly forgotten, except for a tiny fraction that stays in a few influential people's minds and comes to form our heritage of high culture.

I suspect it would have been extremely surprising to people in England at the time of Shakespeare's death that 400 years later anybody would be interested in debating who wrote Shakespeare's plays. It's like the joke that drives the plot of Bill & Ted's Excellent Adventure: that a representative of a future civilization has to journey back in time to make sure that Bill & Ted don't have a high school falling out because the heavy metal music of the band they form after high school, Wyld Stallyns, is the basis of that civilization.

For another example, think back to the absolutely countless number of funny morning disk jockeys there used to be in America before satellite hook-ups turned local businesses into another winner-take-all industry. What if bootleg recordings of one of them came to be recognized in another generation or two as works of genius? People would wonder why almost nobody had noticed when the great genius disk jockey had been fired.

For example, from age 10 to 13, I thought the funniest guy in the world was the morning man at an underpowered San Fernando Valley radio station KGIL, Dick Whittington, who specialized in zany stunts like announcing that since the Vietnam War was so depressing, America needed to cheer up by winning a war. Therefore, he led 10,000 listeners on an invasion and conquest of Catalina Island in 1972. And then he quit or got fired, and everybody instantly lost interest, the way most Londoners lost interest in Shakespeare when he retired back to Stratford.

This being the Internet Age, I can quickly find out that there are a few other people out there who have also thought about Dick Whittington in the last 20 years. From them, I can find out that, to my surprise, Whittington appears to be still alive, in retirement on the Central California coast, putatively writing an autobiographical novel. But, for the benefit of the anti-Stratfordians, I can point out that nobody seems to know anything else about Whittington, such as what his real name was, was he Jewish or gentile, straight or gay, how did he survive the Great Hollywood Snowstorm, and so forth?

Do recordings still exist of Dick Whittington's old radio shows? If they do, will our civilization someday come to be based upon them? Will we then have debates over whether he really existed or whether he was just a front man reading rants written for him by more historically significant characters in California at the time, such as, say, Richard Feynman or Ronald Reagan?

P.S., The corollary of all this is that almost nobody who we think of as having not gotten his due in his time was wholly ignored. For example, Jane Austen's reputation has grown to new and dizzy heights in my lifetimes. Yet, she was by no means unknown in her own. She was a bestselling author, the Prince Regent was an outspoken fan. And then she died, so interest fell off. But a few writers kept reading here and speaking up for her and her reputation endured. But the point is that rediscovered artists were almost never unknown in their own times. Even Vermeer was a big deal in his prime and during the lost centuries continued to a obsess a narrow lineage of connoisseurs.