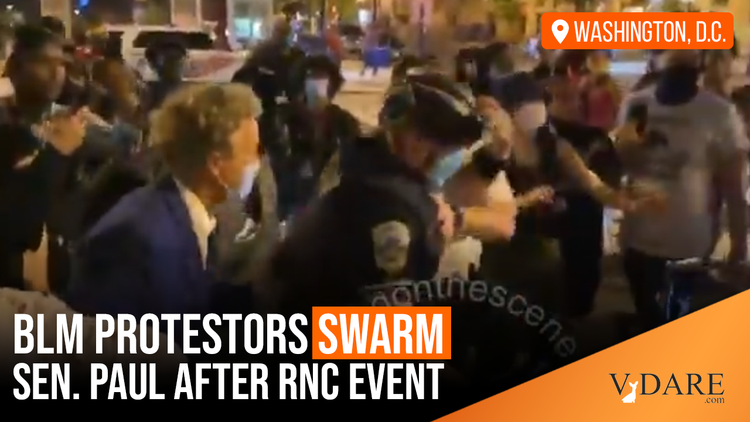 Senator Rand Paul Attacked By DC Mob, One More Sign That It Has Come To Blood

We were warned on January 20, 2017 that, in the words of VDARE.com Founder Peter Brimelow, “it would come to blood.”

For the third time since Donald Trump’s election in November 2016, crazed Leftists have threatened to take Sen. Rand Paul’s life.

Rand Paul calls for FBI arrests, investigation into 'mob' he believes 'would have killed us,' if not for police, by Caleb Parke, Fox News, August 28, 2020

Sen. Rand Paul, R-Ky., told "Fox & Friends" he believes he would have been killed if not for the police when he and his wife were surrounded and attacked by a "mob" yelling threats and pushing police upon exiting the White House after President Trump's acceptance speech at the Republican National Convention (RNC) Thursday night.

"It was horrific," the Republican senator—who had part of his lung removed due to a complication from the 2017 assault by his neighbor—told host Steve Doocy of the "unhinged" mob that continued to get bigger and bigger.

SEN. RAND PAUL THANKS DC COPS FOR SAVING HIM FROM 'CRAZED MOB' AFTER RNC

"They're attempting to push the police over to get to me, so at one point they push a policeman backwards, he stumbles and he's trying to catch his balance and I catch the back of his flak jacket to stabilize him to make sure he's OK because he's our defense," Paul explained. "If he's down, the mob's loose on us."

If not for the police, Paul said he could've been killed or recovering in the hospital, adding that people followed him into the hotel.

"I truly believe this with every fiber of my being, had they gotten at us they would have gotten us to the ground, we might not have been killed, might just have been injured by being kicked in the head, or kicked in the stomach until we were senseless," he explained.

If this could happen to a Senator on the streets of Washington D.C., what do you think Black Lives Matter/Antifa mobs could do to you and your family?

There’s a reason why gun sales have never been greater in U.S. history and sales to first-time gun buyers are exploding.

It has come to blood.