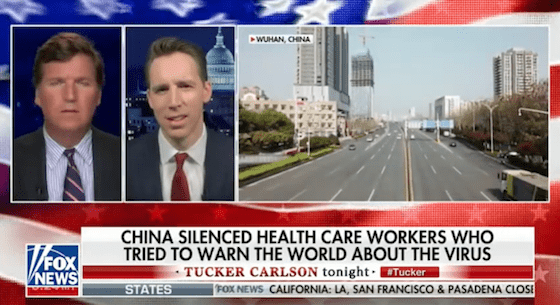 It would be nice if the whole coronavirus debacle might wake Washington up to the danger that Red China represents.

The whole globalist economy idea was pitched to Americans as being good for creating more and less expensive consumer goods, a system with no downside.

The scheme was advantageous for nations with lots of cheap labor like China. And that country has grown from a poor backwater to a global powerhouse based on outsourced manufacturing from America.

Lately Red China feels strong enough to be the home of a new contagion (perhaps even creating it in a bioresearch lab) without warning the world about it. 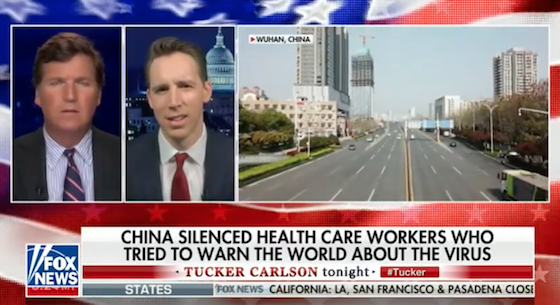 Senator Josh Hawley appeared with Tucker Carlson recently to suggest that China be “held to account” for the evil it has exported.

TUCKER CARLSON: Senator Josh Hawley represents the State of Missouri. We’re always happy to have him on tonight. Great to see you, Senator.

CARLSON: You’ve been one of the relatively few people in the Congress who has been sounding the alarm on China for a long time. The coronavirus, I think, has highlighted the reasons why that’s an important story. Where should we go next?

HAWLEY: Well, I think one of the things the coronavirus has done, Tucker, is just bare the fact that our globalized economy is an economy that really works for China first and foremost, and not for the United States. Certainly not for American workers.

I think it’s time that we asked ourselves what kind of an economy we have we allowed to be created, and what is it doing for American workers? We need some structural reform.

CARLSON: I think that’s exactly right. In the short term, though, the country is paralyzed by coronavirus, which came from eastern China, of course. What do we know about the Chinese government’s coverup of this virus in its early days?

We know that they delayed global response to this virus by weeks, weeks that represent thousands of lost lives, Tucker.

There are studies out there that show that if we had had more time to deal with this, lives — many, many lives could have been saved.

So listen, the Chinese Communist Party has systematically lied to its own people who paid the price. They lied to the world. Now, we’re all paying the price. And that’s why I think we ought to have an international investigation about where this originated.

We know where it was; it was China. China ought to be held to account and they ought to be made to foot the bill for what the world — including the United States — is now suffering.

CARLSON: I agree with that. Absolutely and completely. But sort of off topic, but I have to ask you, are you heartened by the economic support plan taking shape in Washington right now? Do you think it’s good or bad?

HAWLEY: I am heartened by idea that we ought to be giving direct relief to families in particular, families need relief. I do think that it’s important that the low-income families not be left out and not be punished. Any kind of relief shouldn’t be regressive, Tucker.

Families — working families — need relief and they ought to get it.

CARLSON: Amen. Senator, thanks a lot for coming on tonight. Good to see you.