News reports have been stacking up about big MS-13 arrests since America’s Attorney General Jeff Sessions declared the gang to be a top focus for the administration’s law enforcement. In mid-May, it was reported that a nationwide six-week sweep enabled ICE to round up 1378 gangsters, of whom 104 were MS-13 affiliated.

The bad news is that increased enforcement has not eliminated returnees. Breitbart noted (6/22), Deported MS-13 Gangsters Keep Sneaking Back Across U.S. Border. Apparently we need to build jails that are less comfy than the accommodations back in their El Salvador homeland.

MS-13 gangsters love the crime opportunities that America affords. like terrorizing communities on Long Island with murders of young people. 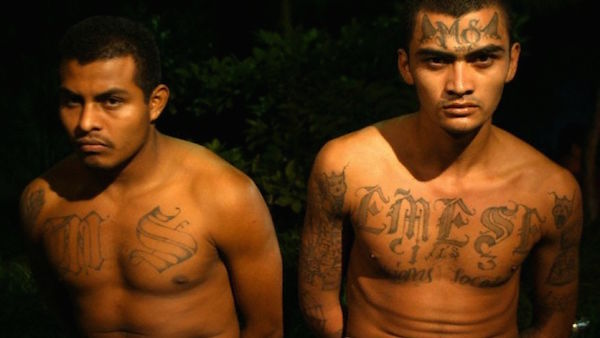 The Senate Judiciary Committee held a hearing on June 21 to explore the issue: “The MS-13 Problem: Investigating Gang Membership, its Nexus to Illegal Immigration, and Federal Efforts to End the Threat”. The entire hearing may be watched on C-SPAN.

Grassley Statement on the MS-13 Gang Problem, Its Nexus to Illegal Immigration and Federal Efforts to End the Threat, June 21, 2017

The topic of today’s hearing involves the MS-13 crisis that’s growing and spreading in communities across our nation.

The atrocities of these criminals are not new. This group has existed since the 1980s, and has made a reputation for itself as a perpetrator of extreme—and often gruesome—violence. This organization has been dubbed the world’s “most dangerous gang,” and some say it could be a terrorist organization. But, you wouldn’t expect anything less from a group whose motto is “kill, rape, and control.”

Unfortunately, over the past two years, this terrifying motto has become a vicious reality for many communities across our nation. So far this year, the gang has been publicly linked to dozens of high-profile killings, rapes, and assaults across the country, from the Washington D.C. metro area to Houston, Texas. Undoubtedly, there are many more that simply haven’t been reported.

Let me give the Committee just a few examples of this group’s absolute brutality and inhumanity.

• MS-13 has been responsible for nearly 20 murders on Long Island since 2010, with victims including high-school age children as young as 16. The group is also considered responsible for an additional 32 violent acts, including 8 attempted murders.

• In January, two gang members, both of whom are unauthorized immigrants, lured a 22 year old man from New Jersey to Maryland with the promise of sex, where they butchered him and left him in the woods near Gaithersburg, MD to rot.

• In March, two MS-13 members were charged with kidnapping and sexually assaulting three teenage girls for several weeks, and eventually murdering one of them in what has been described as a “satanic ritual.”

• In March and April, a string of MS-13 murders occurred across southern Virginia, with perhaps the most graphic being the murder of 17-year-old Raymond Wood. According to reports. Wood’s body was found face down in the road, and the MS-13 suspects had cut his hands and throat before stabbing him over 16 times.

While these examples are horrifying, they are far from isolated. According to the Department of Justice, MS-13 regularly conducts gang activity in at least forty states and the District of Columbia, and their violence touches nearly every major community in America.

What’s even more troubling than the recent surge of MS-13 gang violence is the fact the organization has a new, and more disturbing, recruitment strategy: targeting unaccompanied alien children. Let me tell you the story of one such child who was targeted by MS-13, and ultimately lost his life to their violence.

As The Washington Post reported last Friday afternoon, Danny Centeno-Miranda was just 16 years old when he was apprehended at the Border. He traveled to the United States without his parents, and like other minors, he was sent by the federal government to live with a sponsor—in this case an uncle—in an American community.

Danny was enrolled in a local school, where he was, according to reports, “sucked into” tensions between MS-13 and rival gangs. This tension eventually led MS-13 gang leaders in El Salvador to order Danny’s assassination, and he was shot to death at a school bus stop one morning.

Danny’s tragic story is an all too common example of MS-13’s ruthless targeting of children. It is well-known that MS-13 actively targets and recruits children as young as 8 years old. Unaccompanied minors are particularly prime candidates for gang recruitment. Their illegal status and Central American heritage alone make them vulnerable targets for MS-13 recruitment efforts. While their illegal status and Central American heritage are a key factor in MS-13’s targeting, without a doubt the failures of the current system for handling these children is also to blame. The current system is fraught with abuse, systematic errors, and a lack of effective cooperation.

Today we will hear from the agencies that share responsibility for allowing these children to fall through the cracks and become targets for MS-13 recruitment. To help us get to the bottom of this crisis, we have asked representatives from the Department of Justice, the Department of Health and Human Services, and the Department of Homeland Security to testify today.

Independent reports have found that Customs and Border Protection (CBP) has allowed many MS-13 gang members to enter the United States. According the Whistleblower documents obtained by Chairman Johnson, the Obama Administration knowingly released at least 16 known MS-13 members into communities after their apprehension. Many of these members were UACs.

Once UACs are apprehended, the Office of Refugee Resettlement (ORR) is supposed to find these children an appropriate sponsor. Often, these sponsors themselves are in the country illegally, and many of them have criminal backgrounds. Because of the lack of post-release oversight, many children have been placed in dangerous situations, including illegal working environments and in some cases even prostitution rings.

This precarious combination of events—trafficking to and apprehension at the United States border, and placement with inappropriate sponsors— makes UACs vulnerable to gang recruitment. With promises of a cultural community and an escape from often harrowing and isolating living conditions at home, MS-13 has become an attractive option for too many minors. In spite of ample evidence that UACs are a prime target for MS-13 recruitment, none of the government agencies here today have any statistics about how many of the more than 10,000 gang members in our country entered and were recruited as UACs. The end result of the government’s total failure to establish an efficient process and meaningful oversight of the placement of these children has led to the current MS-13 crisis. Today’s hearing is a first step in plotting a path forward to end it.

Throughout the course of this hearing we’re going to explore how CBP and ORR can better cooperate to ensure the safe and proper placement of UACs, and to decimate MS-13 recruitment incentives. We’re also going to hear what steps Immigration and Customs Enforcement (ICE) and the Department of Justice are taking to eliminate this organization on the back end.

At the end of this hearing, I fully expect the government witnesses to have given this Committee a better understanding of what needs to be—and must be—done to end this threat. Too many innocent American and immigrant lives are at stake.