Washington Democrats are busy these days cooking up a Mexico policy two-fer: Gun-grabber Senators like Feinstein and Durbin are pushing the bogus complaints of Mexicans that America is to blame for their domestic troubles because of drug cartels using US-bought guns; plus, by having a hearing the Senators get to look like they are doing something about border chaos.

But even if Feinstein and the rest of the anti-gun Democrats were to close down every gun store in America, wealthy cartels will simply purchase their firearms elsewhere. Obama's agenda is to disarm Americans, using the feckless Mexicans as an excuse.

Senator Durbin's rather limited border chart below, displayed at a hearing on Tuesday, shows his policy prejudices: He is more concerned about American guns getting into Mexico than millions of illegal aliens breaking into this country with drugs, crime and job thievery. [Focus shifts to flow of cash, arms into Mexico, San Francisco Chronicle, March 18, 2009] 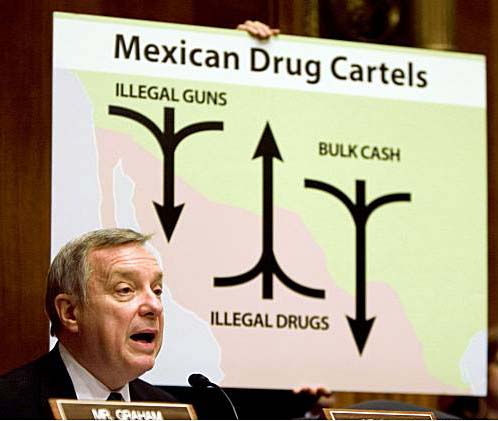 California lawmakers and the Obama administration have begun to shift U.S. border policy with Mexico, abruptly changing focus from illegal immigration to the flow of cash and weapons from the United States that is fueling a savage war between the Mexican government and powerful drug cartels.

"It is unacceptable to have 90 percent of the guns that are picked up in Mexico and used to shoot judges, police officers, mayors, kidnap innocent people and do terrible things come from the United States," Sen. Dianne Feinstein, D-Calif., said at a hearing Tuesday. "I am appalled that you can buy a 50-caliber sniper weapon anywhere and it's not restricted to a federal firearms dealer - you can just buy it."

NRA President Wayne LaPierre appeared on the Glenn Beck show on Wednesday and completely refuted Senator Feinstein's claim that 90 percent of cartel weapons come from the US.