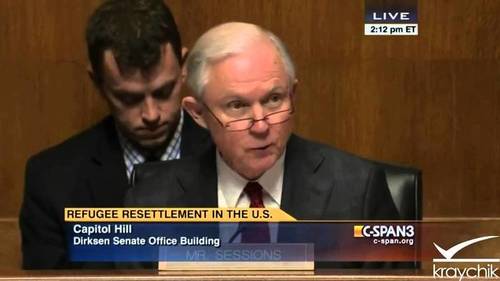 C-SPAN carried Senator Jeff Sessions’ Thursday hearing Oversight of the Administration’s FY 2016 Refugee Resettlement Program: Fiscal and Security (video at link). I watched it all, a two-hour-plus wonky discussion about costs and national security following the administration’s announcement that it would admit extra thousands of Syrians refugees in addition to the normal 70,000+ annual assortment of ultra-diverse humanity. 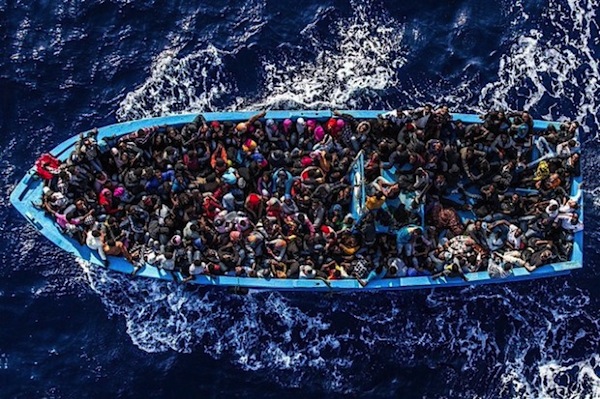 Senator Sessions had one panel of four government officials for the hearing, with no balancing group of critics of the refugee program which would have been a plus. The public needs to see that responsible citizens believe the refugee system is a no-win project for America — big costs, no benefit to the country whatsoever and considerable danger to the people from hostile Muslims like the Boston Marathon bombers, the Tsarnaev brothers.

A fair amount of time was spent in discussing the difficulty in vetting Muslims from a failed state. Nevertheless, the Obama administration is bullish about its ability to find the bad guys, shown by its acceptance rate of Syrians at over 90 percent.

But keeping out current jihadists is not enough: every Muslim is infected with a dangerous ideology which may go from latent to active with stimulus from the outside, like attending a mosque in America that despises our values. The cutesy kiddies that the press likes for refugee photographs today may become Allah-bot killers when they grow up.

A few years ago, the Wall Street Journal had a piece about going undercover among young jihad aspirants in Brooklyn, noting how quickly they could radicalize from seemingly assimilated immigrants to wanna-be killers.

. . . The officer said he fit the profile of the young men he sought to meet: middle-class, first- or second-generation Americans in their late teens or early 20s. He said he watched the radicalization process of dozens.

At times, it was so rapid that a year or two could separate clubbing in Miami from prayer five times a day. . .

It was the same deal with Somali immigrant kid Shirwa Ahmed, who graduated from a Minneapolis high school and was assimilated enough to play basketball and go to the school prom. But in 2008 he went back to Mogadishu and killed dozens as the first suicide bomber from the US.

America should not admit Muslims as immigrants at all. Some or even many may not actually follow the Koran’s instructions to smite the infidels, but you never know which ones will work to nuke a city. The United States did not admit German or Japanese immigrants in WWII though not every person of those nationalities was a combatant. Islamic theology believes in world conquest, and immigration is part of the strategy, known as hijrah. Our government is too naive or stubborn or subverted to act with the knowledge that Islam is our enemy, yet it is.

Muslims must be rescued by other Islamics because the Syria mess is an intramural affair and not the problem of the West. Welcoming thousands of the historic antagonist of 1400 years standing can only end in disaster and death.

Anyway, here is the opening statement of Senator Sessions:

WASHINGTON— Sen. Jeff Sessions (R-AL), Chairman of the Senate Subcommittee on Immigration and the National Interest, delivered the following remarks at the Subcommittee’s hearing to investigate the Administration’s controversial plan to admit nearly 200,000 refugees over the next two fiscal years, including a large increase in Syrian refugees, on top of the existing annual admittance of 1 million permanent residents.

“I would like to thank you all for being here today and thank Senator Durbin for joining us to serve as Ranking Member.

This hearing will focus on the administration’s proposed refugee resettlement program for Fiscal Year 2016. In particular, we will examine the economic and security implications of the Administration’s plan to boost the admission of refugees to nearly 200,000 in two years, including a large increase in Syrian resettlement.

Too often, discussions of any one particular immigration program lack broader numerical context. Refugee admissions, asylees, and parolees are all additional to our huge annual intake of 1 million green card holders, the 700,000 foreign workers and the 500,000 foreign students. So before addressing the policy question of whether or not to admit additional groups of refugees, we should first consider our broader immigration situation.

This week is the 50th anniversary of the 1965 Immigration and Nationality Act. Pew Research has done an exhaustive study on the Act, and here are some of their findings, as well as findings from Census and DHS:

With that context in mind, we must consider what our economic, social and security infrastructure can responsibly handle. Let us not also forget that we are presently dealing with our hemisphere’s immigration crisis.

The situation in Syria and throughout the Middle East is not a problem that can be solved with immigration. While the United States may have a role to play – such as establishing “safe zones” in Syria, as recommended by General Petraeus – it would be more cost-effective to support refugees in locations closer to their homes with the long-term goal of returning them home instead of permanent resettlement elsewhere in the world. That is why Middle Eastern nations must take the lead in resettling their region’s refugees. It is not a sound policy to respond to the myriad problems in the region by encouraging millions to abandon their home. Resettling the region’s refugees within the region is the course likeliest to produce long-term political reforms and stabilization.

It has also been reported that three in four of those seeking entry into Europe are not refugees from Syria, but economic migrants from many different countries. In a September 23rd Washington Post article, it was reported that

‘there are well-dressed Iranians speaking Farsi who insist they are members of the persecuted Yazidis of Iraq. There are Indians who don’t speak Arabic but say they are from Damascus. There are Pakistanis, Albanians, Egyptians, Kosovars, Somalis, and Tunisians, from countries with plenty of poverty and violence, but no war. It should come as no surprise that many migrants seem to be pretending they are someone else. The prize, after all, is the possibility of benefits, residency and work in Europe.’

We must be more cautious. The administration originally proposed a ceiling of 75,000 refugee admissions in the next fiscal year. Last week, the administration announced that it plans to accept up to “at least” a “floor” of 85,000 refugees next year, and at least 100,000 the following year.

Once here with refugee status, these individuals can claim any job and collect any federal welfare benefit. Recent statistics from the Department of Health and Human Services’ Office of Refugee Resettlement indicate that 75 percent of refugees receive food stamps and more than half receive free healthcare and cash welfare. For refugees from the Middle East, the numbers are even higher: more than 90% of recent Mideast refugees draw food stamps and about 70% receive free healthcare and cash welfare.

Refugee resettlement also comes with security risks, as we have witnessed with the surge of ISIS recruitment among Somali-refugee communities in Minnesota. Anyone claiming to have a serious and honest discussion of refugee resettlement must ask the difficult questions about integration, assimilation and community safety.

This is certainly true with respect to countries like Syria, where we have little to no information about who these people are, and no ability to determine whether they are radicalized now, or likely to radicalize after their arrival in the U.S. Indeed, the FBI Assistant Director for Counterterrorism has testified that the United States does not have “systems in places on the ground” in Syria to collect enough information to properly screen refugees. Our Subcommittee is currently investigating the scores of examples of refugees and asylees who go on to commit acts of terror or become involved with terrorist organizations.

The economic and physical security of the American people must never be a secondary consideration. With workers’ pay stagnant, our entitlement programs on the verge of insolvency, our law enforcement struggling to combat radicalization and increasing crime, and our schools and communities struggling to keep up, voters are rightly wondering about their government’s priorities. We will explore those priorities today.

Once again, I would like to thank the witnesses for joining us. We look forward to your testimony.”

Later in the day, the following message appeared on Senator Sessions’ Facebook page:

“Today the Senate Subcommittee on Immigration and the National Interest conducted an oversight hearing with four Administration officials responsible for administering America’s refugee programs. The testimony provided today only further erodes my confidence in our ability to vet Syrian refugees or to control the extraordinary expense imposed on taxpayers. The following facts were established conclusively:

• We do not have access to any Syrian government database to learn the backgrounds of these refugee applicants.

• We do not have adequate resources or records and will not conduct any meaningful investigation of each of the thousands of applicants.

• The administration approves over 90 percent of all Syrian refugee applications.

• We have no capacity to determine the likelihood that Islamist refugees, once admitted to the United States, will become involved with terrorist activity.

• We are already struggling with a huge problem of prior Islamist refugees seeking to take up arms with terrorists, and we have every expectation that the Administration’s current refugee plans will exacerbate that problem.

• It is not a probability, but a certainty, that among the more than 1 million migrants from Muslim countries we will admit over the next decade, a number will already be radicalized or radicalize after their entrance into the U.S.

• With respect to cost, the $1.2 billion budget for refugee placement is only a minute fraction of the total expense, and does not attempt to measure the short-term or long-term costs of providing access to virtually all welfare, healthcare, and retirement programs in the U.S. budget, as well as community resources such as public education and local hospitals.

• Robert Rector, with the Heritage Foundation, estimates the lifetime cost of benefits at $6.5 billion per 10,000 refugees. In the most recent year, the Office of Refugee Resettlement provided services to some 140,000 newly-admitted refugees, asylees, and related groups.

The United States has let in 59 million immigrants since 1965, and is on pace to break all historical records within a few years. We now face the enormous challenge of helping millions of our existing residents – prior immigrants, refugees, and the US-born – rise out of poverty. Our first duty is always to those already living here. The responsible and compassionate course for the United States is to help assist in the placement of refugees as close to their homes as possible. Encouraging millions to abandon their homes in the Middle East only further destabilizes the region, while imposing enormous costs on an American public that is struggling with low pay, rising crime, high deficits, and overstretched community resources.”