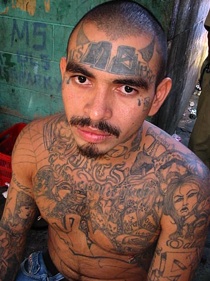 In a decision of the Fourth Circuit Appeals Court, judges allowed that an illegal alien MS-13 gangster could get on a path to citizenship because he had renounced his gang affiliation. A couple of Republican House members are upset at the precedent that decision would set, but perhaps the judges had merely absorbed the spirit of the immigration expansion bill passed by the Senate last year.

The National ICE Council, an organization of immigration enforcement officers, wrote a letter warning the Senate that the legislation was too permissive toward criminals:

[. . .] Section 3701 of S. 744 states that illegal immigrants who are members of street gangs – most of which are heavily involved in criminal activity and violent crimes in the communities and areas we police – simply have to claim that they renounce their gang affiliation in order to obtain a waiver that would make them admissible to the U.S., and potentially eligible for legalization and eventual citizenship. We anticipate, as should Congress, that many gang members will falsely claim to renounce their association with criminal street gangs to obtain legal status and continue engaging in unlawful conduct in the United States. [. . .]

I checked the final version of the bill which passed, and the forgiveness remains “if the alien has renounced all association with the criminal street gang.”

Could al Qaeda be considered a criminal gang? What if the remaining cutthroats being held at Gitmo claimed to renounce affiliation with their jihad gang — could they claim asylum in America?

Since a Somali pirate may soon be released into the US as an asylee due to the refusal of the administration to protect public safety, the possibilities in this area of lawlessness may be widening considerably.

As comedian Lily Tomlin remarked, “No matter how cynical you get, it’s impossible to keep up.”

In the wake of an appeals court ruling allowing an illegal immigrant gang member to remain in the country because he renounced his membership, a couple of GOP lawmakers are calling on the Justice Department to appeal.

On Jan. 23 in the matter of Martinez v. Holder, the Fourth Circuit Court of Appeals ruled that Julio Martinez, an illegal immigrant MS-13 member from El Salvador, could remain in the U.S. because he renounced his membership and that gang members in El Salvador would kill him if he returns.

“We are concerned that based on this decision, gang members will be able to receive asylum or withholding in the U.S., simply by telling immigration authorities that they have renounced their membership in the gang,” the letter sent Friday read. “In the Martinez case, an MS-13 gang member did just that. Surely it is likely that when gang members are placed in removal proceedings, they will claim that they are no longer a member of a gang and have renounced gang membership in an attempt to circumvent removal. Even aliens who have in fact left gangs were members of criminal organizations and do not deserve the protections of asylum or withholding.”

According to Goodlatte and Forbes, this case could create a loophole for gang members to game the system and stay in the U.S. by simply stating they had renounced their gang affiliation.

“Current and former gang members should not be shielded by our asylum or withholding system,” the pair wrote. ”Indeed, the Committee has already marked up legislation, HR. 2278 — the SAFE Act, which clarifies that anyone who is or has been a member of a gang may not receive asylum or withholding on any grounds… While the Committee has done its part, we would like to know what DOJ plans to do to address this problem.”