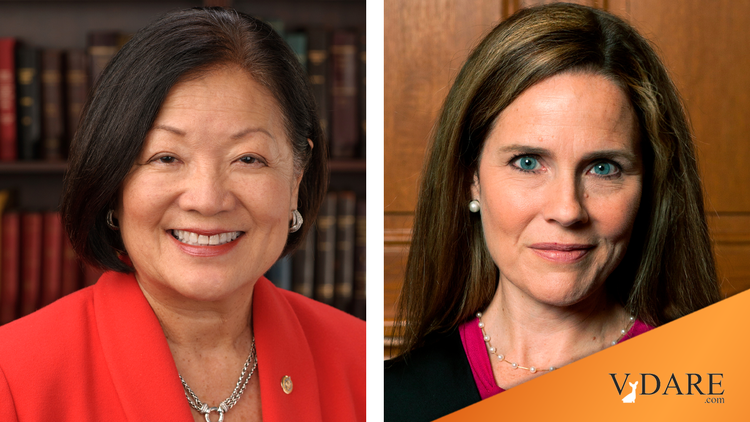 Sen. Hirono To ACB: Since You Became A Legal Adult, Have You Ever Made Unwanted Requests For Sexual Favors?

Act only according to that maxim whereby you can, at the same time, will that it should become a universal law.[1]

Sen. Mazie Hirono’s definition of sexual harassment is not, yet, a universal law, but if it were …

Sen. Mazie Hirono asks ACB "since you became a legal adult, have you ever made unwanted requests for sexual favors or committed any verbal or physical harassment or assault of a sexual nature?" pic.twitter.com/6JgLkoIXIF

If acted upon universally in the manner of Kant’s categorical imperative, Senator Mazie Hirono’s definition of sexual harassment –“since you became a legal adult, have you ever made unwanted requests for sexual favors?” — would lead to the eventual extinction of the human race.

Granted, Ms. Barrett’s requests for sexual favors have probably not very often turned out to be unwanted, but for the rest of us, there’s a certain stochastic element in carrying on the human race.

Here’s something I wrote 27 years ago in the wake of the Anita Hill brouhaha:

WASHINGTON, D.C. — “Practically every evening for a month in 1978, the Senator would come into my office and close the door,” tearfully recounts a former campaign worker. “He’d look me over slyly, then ask, ‘What’s green and skates?’ I’d answer, ‘I don’t know, Senator.’ And he’d chortle, ‘Peggy Phlegm!'”

“I was sitting on the men’s room toilet,” recalls another one-time staffer. “Finding me trapped there, Senator Noland stood outside my stall for 20 minutes telling me jokes like, ‘What did the snail say when it climbed on the back of the tortoise? “YA-HOO!”‘”

Washington has been rocked by accusations by two dozen former employees and acquaintances that Senator Edmund Noland, (D-Alaska), who was reelected in 1998 under the slogan “Serious Times Require a Serious Senator,” made unwanted humor attempts. Although Congress exempted itself from the Humor Harassment Act of 1997, the revelations have already led to demands for public hearings on the scandal involving the man previously admired as the dean of the New Earnestness.

“It’s not about humor, it’s about power,” explains humor harassment expert Dr. Malachi Bismarck, “The power to inflict your personality on your helpless, cringing underlings.”

One victim of the Senator’s unwanted humor attempts admits, “Sure, sometimes he told good jokes. But, who can remember the funny ones? It’s the painfully embarrassing stinkers that haunt you to the grave.”

A former aide reveals how his hero-worship had turned to horror. “I went to work for him because of his thought-provoking speeches against racism, the deficit, nuclear winter, global warming, and the coming ice age.” But a shrouded side of his idol emerged during a routine 1994 hearing on an Air Force training program for pilots from Spain, when Senator Noland leaned over and whispered to his aide, “I hear the handbook is called ‘How to Make the Spanish Fly.’ . . . Get it? Spanish fly! Hnnh? Hnnh? Get it?” and heartily elbowed his aghast assistant.

When asked about the incident, the Senator would only comment, “Some people, they just don’t get it.”

“The Senator would tell me how Jesus and St. Peter are playing golf and Jesus keeps trying to hit just a 5-wedge like Arnold Palmer does on this long 240 foot par 7 over a lake, but he can’t hit it far enough, so he walks on the water to get his ball out of the lake, and so this golfer behind asks, ‘Who does he think he is, Jesus Christ?'” recalls one time aide Nick Hill.

“Sure, I laughed then, but Dr. Bismarck’s Humor Victims Support Group has helped me see how degrading it was,” reflects Hill. “Why is it supposed to be funny when St. Peter says, ‘No, He is Jesus Christ, He just thinks He’s Arnold Palmer?’ I mean, who is this Arnold Palmer person?”

“The Senator relished fake dog-doo and squirting boutonnieres,” recollects a Greenpeace lobbyist, a longtime political ally. “We Beltway oldtimers had to warn the younger ones not to meet with him alone on April 1st. Then, there were his dialect jokes: he’d start off with the appropriate Scottish or French accent or whatever, but would inevitably slide back to his all purpose Irish brogue, complete with ‘Faith and begorrah,’ by the punchline. That is, when he could remember the punchline. I don’t know how many times he told me about the dyslexic agnostic who lies awake at night wondering, ‘Is there a God?'”

The Senator’s friend, Washington lawyer Jack Kravits, contends, “It’s not like he’s the only closet cornball in Washington: there’s a Supreme Court Justice, for instance, who annually tells his clerks:

“Which is, now that I think about it, probably the most cogent defense possible of the logic of the Court’s compromise abortion decision in Reproductive Services v. Casey.”

Senator Noland’s chief of staff, Mardi Ames, defends her boss: “He’s only being singled out because he outreached to the humor-resistant community years before the humorless won recognition as a legally protected minority. If he had hired only humorful people, they’d have just razzed him back instead of brooding upon it for decades.” Ms. Ames asks, “Is it fair to depict a man’s life as if all his jokes were duds?” When asked for an example of the Senator’s wanted humor attempts, she offers, “Well, let’s see . . . oh, yes, there was the one about the three strings who walk into a bar and the first string says . . . Uh, well, maybe not that one . . . Look, can I get back to you on this?”

A sense of betrayal is growing among Noland’s longtime supporters. Pulitzer Prize winning columnist Nina Lindblad laments, “Repeatedly, my friends and I have celebrated some seemingly serious politician, only to be cruelly disillusioned. Are we utter fools? Do we know nothing of human nature? Well, of course not, so it must be society’s fault, or maybe the media’s.”

Humorism activist Bismarck sums up, “We are not against humor. Everybody wants wanted humor, but nobody wants unwanted humor. It’s that simple.”

Just before presstime, Senator Noland issued a statement that he had been diagnosed as a victim of Humor Addiction Malady (HAM), and was checking himself into a clinic in order “To learn if my alleged behavior (which I deny completely but personally apologize for if it offended anyone) stems from my history of childhood sports abuse. After 50 years of repression, I have only now recovered my buried memory of how my father made me play Little League. The experts are finally realizing the terrible toll taken by ‘Right Field Syndrome.’ I hope my accusers can somehow find it in their hearts to forgive my Dad.”