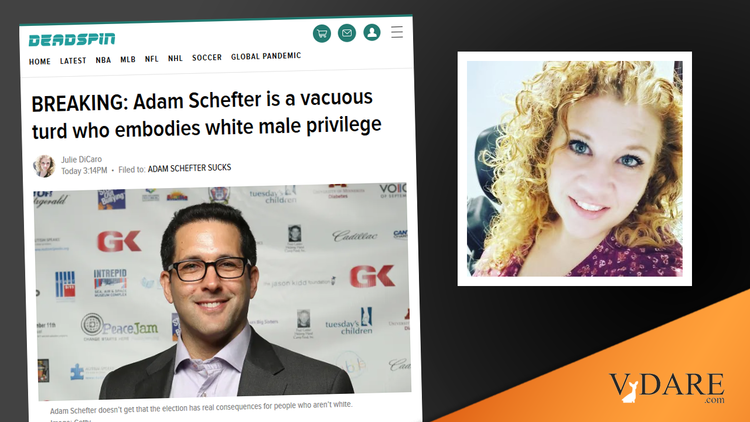 Deadspin: A More Successful Sportswriter Whose Job I Hunger for Is A Vacuous Turd Who Embodies White Male Privilege

From Deadspin, a site for Woke sportswriters (whose numbers are Legion even if their readers are not so much):

Adam Schefter doesn’t get that the election has real consequences for people who aren’t white.

Adam Schefter is a popular reporter and analyst for ESPN who covers the NFL as well as the NBA. iSteve commenter Lot points out that Schefter has 7.9 million Twitter followers, an enormous number. Apparently, he’s the guy who breaks the most stories about what’s going on in the NFL, such as injury and trade reports, news that’s hungered after by fans and bettors.

Sports media is overpopulated by privileged white people, myself included. But it’s especially populated by privileged white men, who are never called to account for their privilege or use it in any constructive way. America seems, by and large, OK with this: The “leave politics out of sports!” crowd has effectively shouted down and exhausted those of us who keep insisting that sports is not, and has never been, apolitical. For the most part, we try to pick our battles and ignore the rest of it.

But sometimes a white media person does something that evidences such terrible judgment, such lack of compassion or care for the people they cover, that it merits calling them out on it. Witness, then, this tweet from ESPN’s Adam Schefter:

Three weeks from today is a hugely significant day, with potential ramifications for years to come.

See, because you think he means the Presidential Election, but he actually means the NFL trade deadline!

This is a poor attempt at humor during a good year, and a “fuck you” to every non-white person who has been and continues to be deeply affected by the actions and policies of Donald Trump in 2020. While the President continues to refuse to disavow white supremacy (shoutout to Jemele Hill, who was light years ahead of the rest of America on this one), while COVID continues to ravage Black and brown communities at two and a half times more than white ones, while people wait in line to vote for upwards of 11 hours in Marietta, Ga., this is the joke Adam Schefter decided to make.

Schefter has built his career and reputation on covering a league that is 70 percent Black. It’s also a league that is run, coached, and covered overwhelmingly by white men. I have a pretty good idea who the audience was intended to be for Schefter’s tweet, but I hope the guys he covers in the league see it as well — and remember it next time they decide who they trust with their stories and information.

I know, I know, he was just joking, right? Okay, it was a bad joke, but he didn’t mean anything by it.

At what point, though, do we start holding people accountable for bad jokes that actively ignore harm to others in the name of scoring some Twitter likes? When do the white men who cover largely Black leagues have to walk a mile in the players’ shoes?

And, my God, when will sports media stop being a haven for mediocre white men to make hay off the suffering of others?

I don’t subscribe to cable TV and I don’t pay much attention to the NFL or NBA in recent years, so I’d never heard of Adam Schefter, age 53, but by glancing at some background on him, he doesn’t seem to be a mediocre white man, he seems to be a white man who is very good at his highly competitive job. Lots of people would love to be paid to talk about football and basketball on TV, and out of all that competition, Schefter has, over the decades, worked his way up to very near the top of his field.

A couple of questions: Do many Jews ever get worried that open season on white men with good jobs is turning out to be bad for Jews like Schefter, who, after all, disproportionately fill many of the jobs most lusted after by the Woke mob? Or does the notion that Jews tend to be, by current use of the term “privileged,” quite privileged and thus endangered by the War on White Privilege just Does Not Compute for most Jews?

We saw with the #MeToo cancellations of older white men with good jobs like Harvey Weinstein (deserved) and Senator Al Franken (undeserved) that a very high proportion were Jewish, in part because Jews disproportionately fill a lot of the really good jobs. But nobody except Larry David dared mention it in public.

But at least those victims did something to get in trouble.

Now, the Woke are turning on apparently perfectly innocent white men like Schefter in the hopes of ruining their careers by accusing them of White Male Privilege and getting their jobs instead. Once again, a high proportion of the targeted are Jewish.

Do Jews grasp that they comprise a remarkably high percentage of people with enviable jobs? Or, in deriding that fact as a “stereotype” and a “trope” have they come to believe their own propaganda, so it seldom occurs to them that they are promoting a job market pogrom against themselves?

Do you think Michael Bloomberg, Mark Zuckerberg, Chuck Schumer, Larry Ellison, Sergey Brin, and/or George Soros ever worry that all this is turning out to be bad for the Jews? Do any of them have a plan for after the election to slow this runaway train down?

Second, as I said, I’m guessing that Schefter doesn’t deserve to be called a “mediocre white man.” But I can think of somebody who does embody the meme of the Mediocre White Man being elevated far above his deserved station in life: Joe Biden.

Biden got elected to the Senate from a tiny state at age 29 and held that post for 36 years, then got a no-work job as vice president. He’s currently running for President by sitting in his basement.

How will having the epitome of a Michael Scott–style genuine Mediocre White Man as President going to work out anyway?