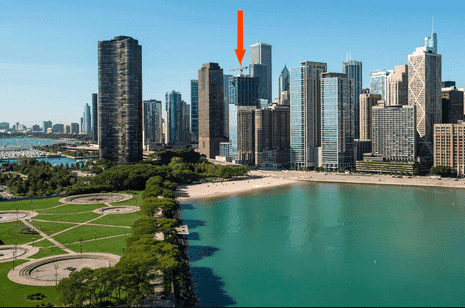 The high-rise at 500 N. Lake Shore Drive is the second-most expensive in the city, with rents for a one-bedroom apartment approaching $3,000 a month, well beyond the reach of most Chicago residents.

But that’s not too much for the Chicago Housing Authority, which has used federal tax dollars to pick up most of the tab for four lucky residents in the year-old building, with its sweeping views of Lake Michigan, a concierge and a dog-grooming center.

The tenants moved in over the past two years as part of a push by the CHA to expand its housing voucher program so that more low-income residents can leave the city’s roughest neighborhoods and start a new life in places with low poverty and crime and close to good schools and jobs.

500 N. Lake Shore Drive next to Navy Pier and Lake Point Tower is about as obviously good an address as you can get in the nation’s third biggest city. The vice-chairman of the company I worked for in Chicago back in the 1980s lived at 666 N. Lake Shore Drive (later renamed 680 N. LSD for Mark of the Beast-related reasons; residents tired of their guests joking, “You really did sell your soul to the devil to live here, didn’t you?”).

New apartment tower in Chicago fails to impress from the outside Where less isn’t more: A glass box along Lake Shore Drive is a missed opportunity March 16, 2014|Blair Kamin | Cityscapes

… Related Midwest’s ambitious president, Curt Bailey, has announced his intention “to do skyline-changing buildings that will last in perpetuity in Chicago.” Yet the company’s first effort, a block north of the Spire’s infamous hole in the ground, is a two-star building on a four-star site.

The Legacy, a sculpted wedge of glass, reflects the anything-goes mindset of the pre-recession era. In contrast, 500 Lake Shore Drive, which opened last year, is a product of recession-induced austerity. It wins high marks for a posh interior, but its urban presence is bland and forgettable.

The 47-story high-rise pales in comparison to the suavely undulating form of Lake Point Tower on the other side of Lake Shore Drive. …

At the time Johnson’s design was unveiled, a Related executive told Crain’s Chicago Business that it was anything but a “uniform box.” So what did Related build? A uniform box that resembles something from 1970, when modernist glass boxes were making cities interchangeable.

Inside 500 Lake Shore Drive, however, it is definitely 2014, particularly in the imaginatively conceived “500 Club.” …

500 also benefits from a high-ceilinged, expansive lobby that pushes second-floor apartments above the elevated portion of Lake Shore Drive, giving them lake views. Because the building’s narrow side faces Lake Michigan, most tenants enjoy such vistas from their units.

The apartments, which range from studios to penthouses, are deftly arranged, with energy-efficient floor-to-ceiling glass and open plans compensating for relatively tight spaces in conventional units. Even with pricey rents — $2,400 a month for a studio, $4,595 for two-bedroom units near the building’s top — the high-rise is 95 percent leased, according to a Related Midwest spokeswoman.

So, we can see that America’s Poor are still being denied their Constitutional right to live in architecturally significant envelope-pushing new high-rises and are instead being forced to make do in cautious luxury buildings that concentrate more on interior pizazz than on a landmark exterior.

Seriously, how much do you want to bet that the Section 8 residents are an alderman’s secret second family or something like that? There’s a lot of talk these days about “affordable housing,” like that new Manhattan building that has a separate entrance for the poor people who get to live in it so the rich people who pay full rent don’t have to mingle with the welfare folks on the elevator. But nobody seems terribly interested in who exactly are the folks getting these privileges. Somehow, I don’t think the distribution of this largesse is wholly random.