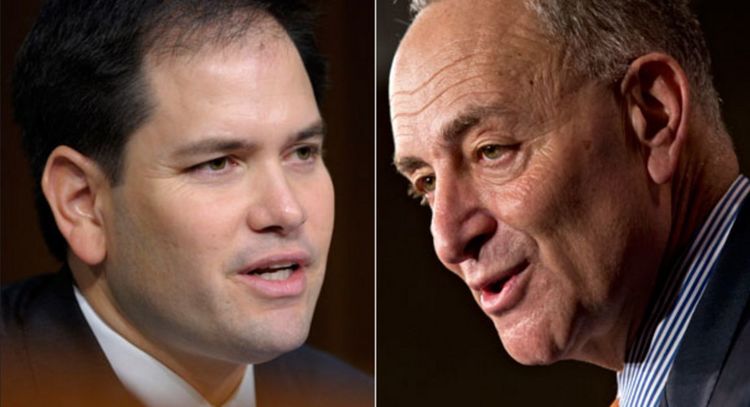 Steve Sailer's post below mentions that Chuck Schumer is much, much brighter than Rubio. Schumer scored 1600 on his SATs, competed on IT'S ACADEMIC, and graduated from Harvard and Harvard Law. Rubio attended disreputable South Florida schools on football scholarships, including "what by one measure was the single worst 4-year colleges in the USA".

The relationship between immigration policy and IQ  is what got Jason Richwine fired recently. IQ is very largely hereditary, and Schumer's grandfather was an immigrant, as was Rubio's father.

Who were Charles Schumer's parents and what did they do?

Schumer's parents were Selma Rosen and Abraham Schumer. Selma Schumer was a homemaker and stayed active in the community with her children. Abe Schumer owned and ran a small exterminating business for 32 years after serving in World War II. The Washington Post reported that, when Schumer "took his seat in Congress in 1980, both Abe and Selma went with him to his office on Capitol Hill. Abe remembers he saw a cockroach."

Rubio Senior left Cuba as an economic migrant in 1956, before the Castro takeover. (See Marco Rubio’s compelling family story embellishes facts, documents show, By Manuel Roig-Franzia, Washington Post, October 20, 2011.) He came to America for the same reason the Puerto Ricans were coming to America that year—because there was more money to be made as a bartender in America than in Cuba.

In short, Mario Rubio was one of those  unskilled immigrants Jason Richwine warned you about. His son has a good job  with the government, which represents progress for the Rubio family, but not necessarily for America.