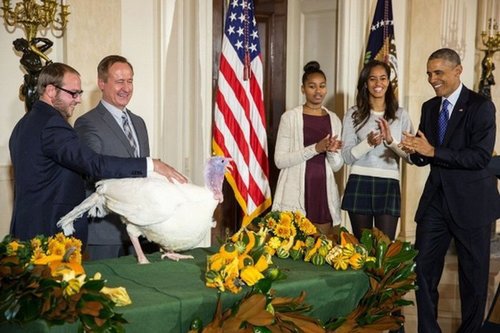 A white, female, Republican staffer criticized Obama's daughters, Sasha and Malia, for their eye-rolling behavior and teenage dress sense during a television appearance:

“Dear Sasha and Malia, I get you’re both in those awful teen years, but you’re part of the First Family, try showing a little class. At least respect the part you play. Then again your mother and father don’t respect their positions very much, or the nation for that matter, so I’m guessing you’re coming up a little short in the “good role model” department. Nevertheless, stretch yourself. Rise to the occasion. Act like being in the White House matters to you. Dress like you deserve respect, not a spot at a bar. And certainly don’t make faces during televised, public events.”

In the girls' defense,  they must be very tired of  watching their dad pardon the Thanksgiving Turkey.

Here, via Mollie Hemingway at the Federalist [Dear Media: This Elizabeth Lauten Nonsense Is Why Everybody Hates You.] is the coverage of Elizabelth Lauten just from the Washington Post:

So we know that the national media is deeply concerned about stray insults directed toward the Obama family from Congressional staffers. Is raping people worse than that? Or not? I’m confused. Because a few years ago Congressional staffer Donny Ray Williams, Jr., was indicted for a series of alleged sexual assaults and it got only one “local crime” story in the Washington Post. Yesterday he pled guilty and that also generated one story in the Washington Post. If there’s network coverage of this congressional staffer raping people, I’m not seeing it. Did I mention he was a staff director for Democrats on a Senate panel?

Yes, you did. This is what you didn't mention—Donny Ray Williams is a black Congressional aide. 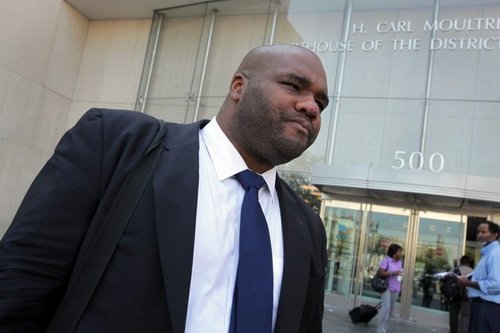 The Washington Post doesn't mention his race either, but they do publish his photograph. Mainstream conservatives  who push back  against media bias against Republicans frequently note that the media won't report the party identification of an accused corrupt Democrat official. This is known in the conservative world as "Name That Party." See A 'Name That Party' Round-Up: The News Media’s Double Standard on Political Scandals, By Rich Noyes, Newsbusters.org, August 18, 2014. In the nature of things, these arrested Democratic politicians tend to be mostly minorities, something mainstream conservatives aren't willing to say.

In the Donny Ray Williams Case, Instapundit said "The press has gone crazy over a GOP aide who chided the Obama daughters, but I’ll bet they pay a lot less attention to this," but Instapundit  made no mention of race, either.

Two results on Google for Elizabeth Lauten  ,who's had her life turned upside down and lost her job over a Facebook post are

The answer to the first is because the people with the Megaphone, especially the Washington Post with its eleven stories above, made it one.

The second is completely mental—Sasha and Malia are the wealthy and privileged daughters of the President of the United States—but you'll notice that the headline writer is allowed to mention that they're black.  The Main Stream Media won't ever mention that a criminal is black, but will always mention if a supposed victim is.

Conservatives need to do better, but many mainstream conservatives just won't, which is why we keep asking you to donate to VDARE.com.