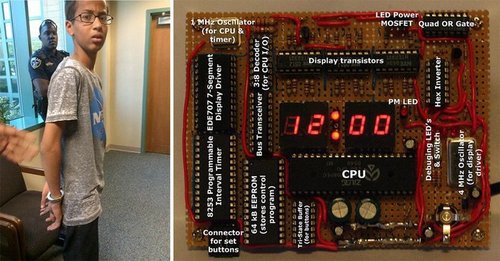 "Cool Clock, Ahmed"—No, It's A Mockup Of A Briefcase Bomb 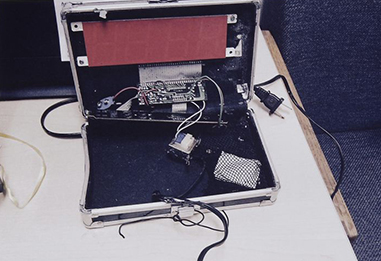 A thing about that clock. In the MSM story I read in my local paper it’s described as an innocuous clock. And the pictures they showed showed the electronic mess of wires.

They never mentioned the metal briefcase.

When finally saw this, i said, “oh, he was trying to make a mock-up of a briefcase bomb.”

do a Google images search of “briefcase bomb”

No one ever mentions this.

Anyone with an understanding of electronics will immediately see this “homemade clock” is not the tinkering of a child or teen. It was never Ahmed’s idea to begin with. This isn’t some innocent science project. The picture of the clock exposes the lie. Ahmed did not lovingly patch together IC chips and resistors, as the media would like you to believe. What you see is the guts from a manufactured digital clock, right down to the 9 volt memory backup, and the prefab button board. Absolutely nothing was made. It’s the equivalent of taking the plastic surround off of your TV and claiming you “made” a TV.

Look at the case itself. CNN calls it a “pencil case.” Please. The whole package is vaguely sinister, and it’s intentional. … It’s almost as if someone designed this clock to look like a questionable object.

Again, from CNN: “”I built a clock to impress my teacher but when I showed it to her, she thought it was a threat to her,” Ahmed told reporters Wednesday.” It was really sad that she took the wrong impression of it.””

Ahmed, you didn’t build a clock. You’re a pawn to your Dad’s political and social agenda. This is all a creation of your father. I’m sure he involved you in the process, and made you feel as though you were truly making something, but you didn’t. It’s a clock without its case. Everything in the “pencil case” was made in a factory. See, a legitimate electronics project full of diodes and resistors looks innocent. It usually runs off of a battery, not an exposed AC to DC transformer… speaking of science projects, Ahmed, why again did you bring this to class? Was it part of an assignment? Oh, you just wanted to impress your teacher with a clock you rearranged inside a small briefcase? Hmm…

From dallasnews.com: ““He fixed my phone, my car, my computer,” Mohamed Elhassan Mohamed said. “He is a very smart, brilliant kid.”

If he were so smart, he’d know the difference between creating a circuit and stripping the guts from a manufactured clock. His dad helped him “make” this, and dad helped to make this “project” look as questionable as possible, within the realm of plausible deniability.

The dad is a politician. He made this happen. Whatever agenda he’s advancing, it just further demonizes western society, and reminds us all to be guilty for how racist we all are. Maybe that’s the agenda.

But his dad will get a picture of himself with Obama out of this, which might encourage voters in Sudan to take him more seriously if he runs for president a third time. From OkayAfrica:

The ninth grader is the son of Mohamed Elhassan Mohamed, a Sudanese immigrant who has made headlines of his own over the years. A February 2015 profile in the North Dallas Gazette details the elder Mohamed’s activities.

Born in Sudan in 1961, Mohamed, a former customs worker at Khartoum International Airport, earned a degree in philosophy from Cairo University in Khartoum before emigrating to the U.S. “Once I realized my dream was bigger than what Sudan had to offer I immigrated to America in the mid-1980’s,” he told the North Dallas Gazette. In that same interview, Mohamed shared that upon arrival in the U.S.– where he says his degree was not accepted– he initially sold hot dogs, candy, and newspapers in Manhattan. “I realized this wasn’t enough for me, and I packed my bag and moved to Dallas, Texas y’all,” he told the paper. In Texas, he started out as a pizza delivery man before becoming a taxi driver and ultimately launching his own business ventures– he owns a computer repair shop in Irving, Texas (perhaps where his son gets his tech acuity from), a cab company called Jet Taxi, a medical emergency transport company called Paradise Prime Investments, and the solar energy business AlSufi International in Sudan. He also served as self-elected president of the small Sufi Muslim AlSufi center in Irving. …

Mohamed has also run for president of Sudan on two separate occasions.

He’d run again in 2015 on a National Reform Party ticket. An April 2015 Bloomberg report referred to the Texan as having “the most ambitious agenda” of the incumbent President Umar al-Bashir’s competitors. …

Neither Mohamed nor his party would end up appearing on the ballot. …

Aside from his presidential bids, Mohamed also made headlines for his bizarre role in Rev. Terry Jones’ incendiary Quran trial. In 2012, when the Florida pastor made good on his threat to burn a Quran in his Gainesville church and put the Quran on “trial,” Mohamed, who refers to himself as a sheik, was apparently the one Muslim willing to play along as the defense in the mock trial. “[The church] put an ad on their channel: ‘Whoever feels in himself he has the power to defend Quran is welcome,’” he told the Dallas Observer.

Muslim leaders in Texas, meanwhile, doubted his claims to religious and scholarly leadership. “This so-called leader, we have never heard of this person,” Imam Zia ul Haque Sheikh, head of the Islamic Center of Irving, told the Seattle Times. “I believe the whole thing is made up.” In that same interview, Mohamed, who refers to himself as a sheikh, elaborated on his motivations for getting involved with Jones. “He said he agreed to serve as the defense attorney at Jones’ mock trial because the Quran teaches that Muslims should engage in peaceful dialogue with Christians,” the Seattle Times’ Annie Gowen wrote. “But there was also a more pragmatic reason. It was spring break and he wanted to take his wife and five kids to Disney World: to ‘kill two birds with one stone,’ as he put it.” He also claims he didn’t know the trial– in which the Quran was “found guilty” of “crimes against humanity”– would result in the Quran actually being set on fire. According to the Seattle Times, some of Mohamed’s small group of followers asked that he no longer lead prayers, while others refused to drive for his taxi company.

Contemporary white people have a passion for playing the chump. The shoddier the racket, the more we want to fall for it.