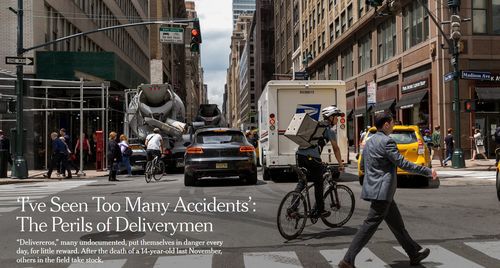 ‘I’ve Seen Too Many Accidents’: The Perils of Deliverymen

“Delivereros,” many undocumented, put themselves in danger every day, for little reward. After the death of a 14-year-old last November, others in the field take stock.

It would be difficult to find a bicycle deliveryman in New York who doesn’t know the story of Edwin Vicente Ajacalon. He was a 14-year-old boy who lived in the city for about a year, having come to the United States illegally and unaccompanied from rural Guatemala, where he’d finished sixth grade and helped his parents work the fields.

Pay careful attention: this is the good kind of family separation, not the bad kind. A 14-year-old leaving his family behind and getting killed delivering for a Brooklyn restaurant is what is finally making America great. Just ask Gov. Cuomo. He’ll tell you.

He did not continue his schooling in New York, however. Instead, he worked as a deliveryman for various Brooklyn restaurants, living with five roommates whom he’d met on the job, in a small apartment in Sunset Park, Brooklyn. …

Then, on Nov. 25, right before 6 p.m., while riding his bike along 23rd Street in South Slope, he was hit by a southbound BMW sedan at Fifth Avenue. Even though the driver had the green light, surveillance video shows his car entering the intersection at high speed.

… Local news broadcasts showed the car had knocked Edwin right out of his Nikes.

The driver was issued a summons for speeding, but no criminal charges were brought against him. According to the city’s Department of Transportation, 24 cyclists died and 4,397 were injured last year in motor vehicle crashes.

Clearly, we need more immigration so New York can have more child laborers getting run over on their environmentally sensitive bicycles while delivering diverse cuisine.

In London, little boy chimney sweeps used to get stuck and die in chimneys or suffer life-scarring lung and skin diseases. It only took Lord Shaftesbury from 1840 to 1875 to get Parliament to pass a law setting a minimum age of 12 for climbing boys.

Economists would patiently explain to Shaftesbury that without 7-year-old chimney sweeps, we’d all freeze in the winter when our chimneys clogged. The magic of the market meant that it was impossible for master chimney sweeps to find some alternative to climbing boys, such as, I don’t know, brushes with longer handles. As commenter Johnny Geo observes, in Ricardo’s classic formulation:

Show me a 30-foot brush handle and I’ll show you a 31-foot chimney.

Ironically but predictably, Lord Shaftesbury froze to death on January 5, 1876.

Today, New Yorkers know better than did Lord Shaftesbury, 19th Century crusader against child labor: food just is better when delivered by a 14-year-old undocumented worker who ran every red light to get it to you 120 seconds faster. You can taste the danger and cruelty in every bite. It’s vibrant.

As the late Anthony Bourdain explained:

You can’t deliver an omelette without smashing a few undocumented child laborers’ skulls.

Without a few kids dead on the pavement, we’d all be eating porridge and boiled mutton, so whaddaya whaddaya?