San Francisco baseball fans were thrilled to see the Giants sweep to victory in four straight World Series games against the Detroit Tigers. However, some diverse residents of the city thought that rioting and property destruction were a fun way to commemorate the win. 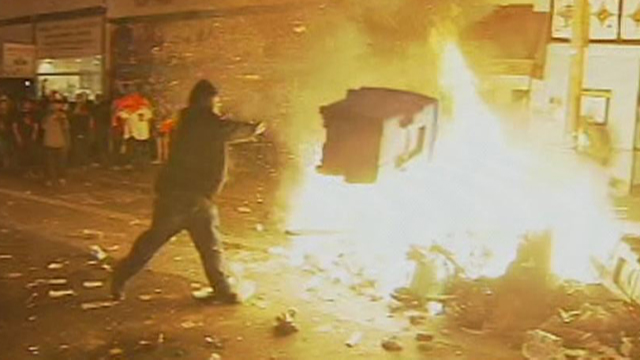 Followers of the cheap labor aspect of immigration may have noticed that the practice extends to baseball: foreign players with a temp visa work hard for peanuts. Teams then pitch the ethnic angle to local tribal members, like the Giants’ Latino Heritage Night, which included a Carlos Santana bobblehead — only $125!

Another sign of the times: the Giants’ deluxe new stadium by the Bay shows its baseball history by a heroic statue of Willie Mays, but the team had no black American players in the recent World Series.

Back to the riot, er celebration:

The Giants swept the series against the Detroit Tigers in four games, clinching it in a 4-3, extra-inning game that set off raucous celebrations throughout the city.

The arrests, most of which occurred in the city’s South of Market and Mission neighborhoods, were for various felonies and misdemeanors, police spokesman Officer Albie Esparza said.

Bonfires were lit in the middle of streets in the Mission District, and a Muni bus was set on fire at Market and Kearny streets. Muni spokesman Paul Rose said that bus had just been revamped and cost $700,000.

Rowdy fans also climbed on top of other buses around the city, and Rose said the agency received reports of broken windows, graffiti and other damage. He said the total damage is still being assessed.

At about 12:45 a.m., a number of large bonfires were burning on Mission Street from 17th Street south. Crowds there were fueling the fires with plastic garbage and recycle bins, which could be seen melting in the flames.

A voice came over a police loudspeaker declaring the gathering an “unlawful assembly” and ordering people to leave the area immediately.

Nearby, fires were still smoldering on Valencia Street, although cars were still being allowed to drive through the area. Police officers wearing riot helmets and carrying batons lined the edges of the street, blocking people from entering the roadway, which was littered with broken glass.

“We responded to approximately 76 fires last night,” San Francisco Fire Department spokeswoman Mindy Talmadge said. “At this point we’re attributing most of them, if not all of them, to celebratory-type activity.”

Of those fires, four were vehicle fires. One involved the Muni bus and another a U-Haul vehicle that burned at 25th and Dakota streets, Talmadge said.

She also said there appear to have been at least a handful of injuries.

“I believe there was one person that may have been injured at one of the bonfires,” she said. “The crowd kind of pushed the individual into the bonfire.”

Talmadge said two police officers may also have been hurt.

She noted that there was “bottle throwing and that kind of activity,” which she said “puts a damper on things for those who are celebrating.”

At Civic Center Plaza, where the game was being shown on a large screen, a 22-year-old man was hit in the head with a bottle and was taken to a hospital, police said.

Talmadge advised merchants to keep their trash and recycle bins out of sight for the next few days, especially along the Mission Street corridor, as more rowdiness is possible.

Vandals sprayed graffiti on storefronts along several blocks of Mission Street between 16th and 24th streets, where burned debris was still piled up on the sidewalk.

Mayela Santamaria, an employee at CJN Dentistry at 2484 Mission St., was busy washing the spray paint off of the door of the business.

“This is not the way to celebrate,” Santamaria said. “This is ridiculous.”