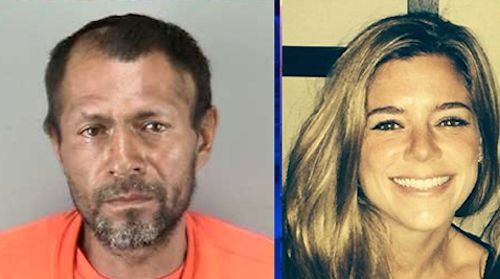 SAN FRANCISCO (AP) — A man suspected in the shooting death of a woman at a busy San Francisco tourist destination has seven felony convictions and has been deported five times, most recently in 2009, a federal agency said Friday.

Officers arrested Francisco Sanchez about an hour after Wednesday’s seemingly random slaying of Kathryn Steinle at Pier 14 — one of the busiest attractions in the city. People gather there to take in the views, joggers exercise, and families push strollers at all hours.

Kice said ICE issued a detainer for Sanchez in March, requesting notification of his release and that he stay in custody until immigration authorities could pick him up. The detainer was not honored, she said.

Freya Horne, counsel for the sheriff’s office, said Friday that federal detention orders are not a legal basis to hold someone, so Sanchez was released April 15. San Francisco is a sanctuary city, and local money cannot be spent to cooperate with federal immigration law.

The city does not turn over people who are in the country illegally unless there’s an active warrant for their arrest, she said. Horne said they checked and found none. ICE could have issued an active warrant if they wanted the city to keep him, she said.

“It’s not legal to hold someone on a request to detain. This is not just us. This is a widely adopted position,” Horne said.

Steinle was gunned down while out for an evening stroll with her father along the waterfront. Police said witnesses heard no argument or dispute before the shooting, suggesting it was a random attack.

Perhaps the President will speak at Ms. Steinle’s funeral?

The AP article doesn’t seem to mention which country Sanchez had been deported to five times. Informing the public of that would be racist. Nor does it mention how he got into the United States all those times. Was he ever legally here? Only Donald Trump or Ann Coulter would find anything relevant about that knowledge. Ignorance is smart.

Were it left to me to decide whether we should have a government without newspapers, or newspapers without a government, I should not hesitate a moment to prefer the latter.

But now we get all the advantages of government and newspapers working together to keep the public from knowing information it shouldn’t know, so all those Jeffersonian quibbles are outdated. Besides, Jefferson owned slaves.

The next day, local San Francisco news camera crews covering the murder were attacked live on television at the tourist attraction.

It’s actually pretty common for news cameras crews to be assaulted and robbed in the San Francisco Bay Area, although it’s more routine over in Oakland. For example, here’s 2012 local news footage of a reporter celebrating outside of Oakland Technical High School the passage of a liberal initiative: the last couple of seconds are when the cameraman is slugged and robbed live: 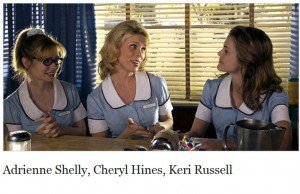 By the way, when the New York Times runs articles demanding to know why aren’t there more successful women movie directors and screenwriters, one reason is because a promising writer-director, actress Adrienne Shelly, was murdered in 2006 at age 40, shortly after finishing her quite decent debut movie Waitress, by an illegal immigrant from Ecuador.

Of course, the Times didn’t mention that the murderer was an illegal alien.