Immigration reporter Mario Guevara was recently turned down in his request for asylum in the United States, and he is miffed at the refusal.

The 34-year-old scribbler claims a list of reasons why he should be admitted. He says he feels like a “victim” and contends he has PTSD. He arrived in 2004 on a tourist visa and never left, then decided (years later) that asylum was the ticket to a permanent home in the first world. He says he fears retaliation from the Salvadoran army even though no journalist has been murdered in recent years in that country.

Below, well-fed failed asylum seeker Mario Guevara feels entitled to remain in the US as long as he pleases, remarking “I don’t see going to El Salvador as an option. Here in this country, I have found everything I need.” 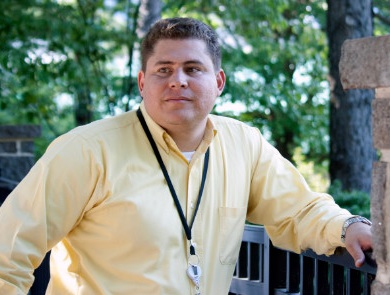 Guevara is using the media to hustle support for his sob story, and almost sounds like he has convinced himself that he is an innocent party (rather than a schemer) and is therefore entitled to the whole assortment of US government benefits.

Naturally, he intends to appeal his case, doubtless assisted by a top-notch immigration lawyer, given his status as a Spanish media propagandist.

A reporter from El Salvador who has been reporting for years about immigration issues in Atlanta finds himself in a position similar to that of many of the sources he covers.

“I understand now what the people feel,” Mario Guevara, 34, told CNN on Friday. “Never in my life have I cried so much as in the last couple of days.”

Last month, an immigration judge turned down Guevara’s application for asylum and ordered that he, his wife and their 14-year-old daughter leave the country within 60 days. “It was the worst news of my life,” said Guevara, who works for the Spanish-language Mundo Hispanico, which is owned by the Atlanta Journal-Constitution.

Their two younger children were born in the United States and therefore would be allowed to remain. His mother and brother, who serves in the U.S. Army, are also U.S. citizens.

The case traces back to 2003, when Guevara was working as a photojournalist for the Prensa Grafica newspaper in the capital city of San Salvador. Routinely assigned to cover anti-government demonstrations, he was accused by some of the demonstrators of working as an undercover agent for the government, which he denies. After he was attacked twice and threatened with death, he moved himself and his family to Atlanta, he said.

But he entered the country in 2004 on a tourist visa and did not immediately file the paperwork seeking asylum, he said. “I had plans to return to Salvador when the situation got better, but that never happened,” he said.

He has cited post-traumatic stress disorder as the reason for the delay.

The judge cited three reasons for the denial: the late filing, the fact that no Salvadoran journalists have been killed or attacked for political reasons during the past two years, and the fact that Guevara could not demonstrate that the police would not protect him, Guevara said.

“Right now, I feel as a victim, frustrated,” he said, adding that he plans to appeal. “I understand that the United States is the best country in the world. But right now, I’m confused.”

Guevara said he was convinced that those who threatened to kill him nine years ago would find him if he were to return. “Death threats have no expiration date,” he said. And the possibility of returning to the country unnoticed would be slim, he said. Prensa Grafica and other Salvadoran newspapers published stories Friday about his case.

Guevara said he understands better now why some people contemplate suicide, though he said he has not done so himself.

Immigration and Customs Enforcement public information officer Vincent Picard said that the department would not track Guevara down and deport him if he chooses not to leave voluntarily, but – absent permission to work – that would only leave him in limbo, Guevara said.

“Voluntary departure is not an option for me,” he said. “I don’t see going to El Salvador as an option. Here in this country, I have found everything I need.”