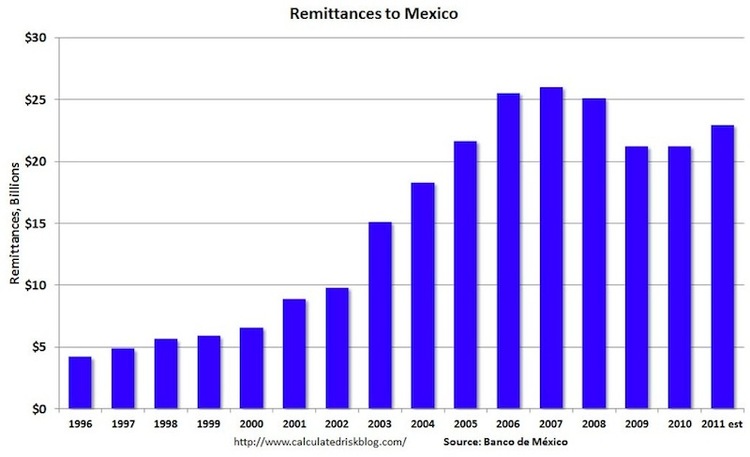 According to the Opravda media, Mexicans have quit breaking in to the US, so problem over, let’s just forget about the disagreeable subject of defending American sovereignty. (Although Central Americans keep coming as before.)

But whatever the media says about the border being secure, another measure, that of remittances, shows that Mexicans are now strip-mining America at nearly normal high levels. 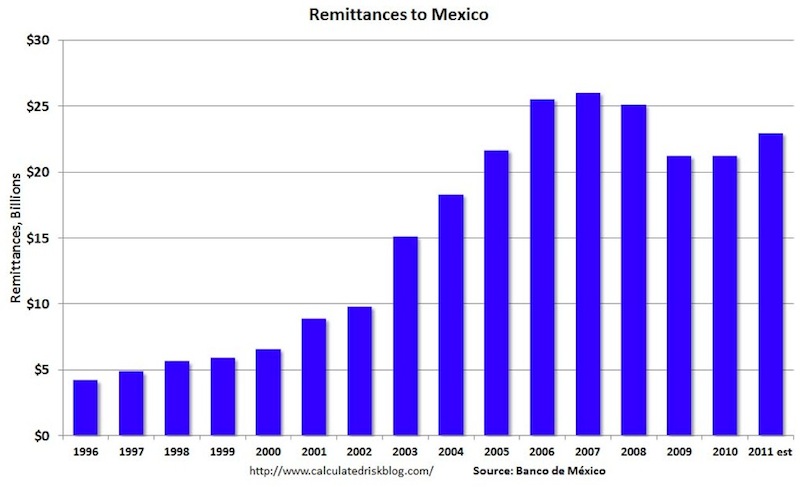 Naturally, la Times of Lost Angeles characterizes the uptick as sign of “an improved labor market” even though the workers are Mexican and many are illegal:

Remittances to Mexico rise in May to highest level since October ‘08, Los Angeles Times, July 3, 2012

Signaling an improved labor market, remittances to Mexico rose in May, its highest level since October 2008, Mexico’s Central Bank reported this week.

Remittances, or money wired abroad by immigrants, totaled $2.34 billion in May, up 7.8% from the previous May.

And the average amount per transaction, $329.21, was up in May by 3.7% from a year before. Remittance experts said May is a particularly busy month for wire transfer operators, as many Mexicans living abroad send money forMother’s Day.

Money wired abroad by immigrants is often seen as a barometer of the economy. Immigrants have seen improved employment prospects as the labor market has improved gradually in recent months. The amount per transaction also rose in May, the central bank reported.

The uptick bodes well for Mexico, where remittances are the nation’s second-largest source of foreign exchange, behind petroleum sales.

Remittances to Mexico soared in the early 2000s as immigrants found abundant work during the U.S. housing boom. At the peak, 1 in 5 Latino immigrants in the U.S. was employed in the building trades, according to some estimates.

But the housing bust and recession sent remittances tumbling after millions of jobs vanished. A crackdown on illegal immigrants has also taken a toll. Tough new state laws aimed at undocumented residents in Alabama, Arizona and other states have forced some migrants to abandon their jobs. Others have changed their financial habits, holding on to cash in the event they’re forced to relocate, experts said.

Remittances dipped during the recession and have recently been rising. In 2011, remittances were up nearly 7% from the year before.