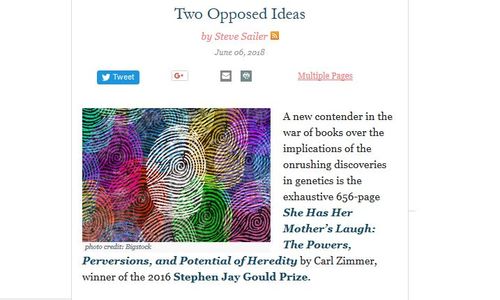 My book review in Taki’s Magazine:

A new contender in the war of books over the implications of the onrushing discoveries in genetics is the exhaustive 656-page She Has Her Mother’s Laugh: The Powers, Perversions, and Potential of Heredity by Carl Zimmer, winner of the 2016 Stephen Jay Gould Prize.

Zimmer, who is more or less Nicholas Wade’s successor as The New York Times’ go-to genetics reporter, applies his Stakhanovite work ethic to recounting the past and present of genetic science. Who were the bad guys responsible for the “perversions” such as eugenics and who are the good guys?

Because just about any scientific advance’s glass is part full while still part empty, these kinds of historical questions are endlessly arguable.

Not surprisingly, because ancestry tends to be emotionally meaningful to humans, writers on the topic of inheritance tend to take familial pride in their own ethnic group’s contributions, while slightly resenting the achievements of scientists from other ancestries.

The most famous figure in this struggle for hereditary bragging rights over heredity was the late Stephen Jay Gould, author of the 1981 best-seller The Mismeasure of Man. It had not pleased the Queens-born Gould that many of his rivals for scientific glory in the 1960s and 1970s had extremely WASPish names such as Ed Wilson, Bill Hamilton, George Williams, Jim Watson, Dick Dawkins, and John Smith.