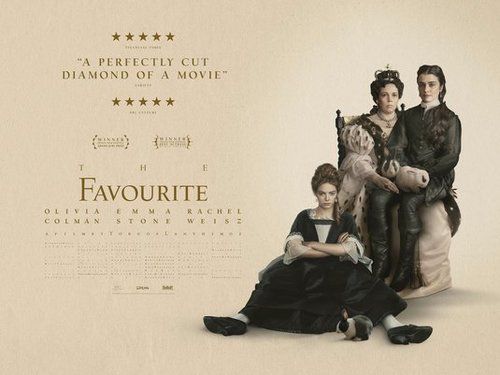 Sailer Review Of THE FAVOURITE

"The Favourite” is a period comedy about the palace connivings among the two rival best friends forever of Queen Anne of England (reigned 1702-1714): the domineering Sarah Churchill (played by Rachel Weisz), the first Duchess of Marlborough and ancestress of Winston Churchill and Princess Di, and Sarah’s impoverished cousin Abigail Hill (Emma Stone).

The movie starts up around 1707, which was after the most dramatic events in the Queen’s life, such as her 1688 decision to support her Protestant sister Mary and brother in law William, the Dutch King, in overthrowing her Catholic father, King James II. Then followed a cold war between Princess Anne and Queen Mary over Anne’s reliance upon the Churchills, Sarah and John, whom William and Mary distrusted as overly ambitious.

Sarah, interestingly, was not a flatterer. She told Anne exactly what she thought, which was usually intelligent, although also massively self-interested. The Churchills were adventurers, very minor aristocrats in a hurry to rise up in a system that rewarded successful servants of the crown with, by modern standards, the kind of lavishness seen rarely anymore outside of Russia or Arabia.

Anne’s 17 pregnancies failed to produce a surviving heir and left her obese and gout-ridden. Then after Anne succeeded William and Mary to the throne, with Sarah Churchill becoming a sort of power behind the throne, John Churchill won a famous victory over Louis XIV at Blenheim in 1704.

Sarah Churchill was an excellent business manager who got built the colossal Blenheim Palace (300,000 square feet) that a grateful Anne bestowed upon the Churchills. Blenheim is perhaps the largest house in Europe constructed by anybody not a royal. Sarah had so much money left over that she found her daughters such prestigious matches that the Spencer-Churchill clan produced, centuries later, England’s most famous prime minister and most famous princess.

But Sarah got so wrapped up in overseeing the construction of Blenheim Palace that she didn’t have much time for the Queen.

By about 1707, when Abigail Hill, who had been working as a palace servant, began to build a warm relationship with the Queen, England (or Great Britain as it became that year) was in good shape. The main political question in the movie is whether the Queen should continue to prosecute the Churchills’ so-far successful war with France to win even better terms, even at the cost of a land tax increase, or give in to Tory calls for peace.

That’s not uninteresting, but it’s one of the less dramatic periods in a tumultuous era that gave rise to modern Britain.

Spoiler alert: John Churchill kept winning battles over the French, but eventually diminishing returns set in in Parliament. Harley’s Tories came to power in 1711, with the behind the scenes help of Abigail (who was also Harley’s second cousin), who encouraged the Queen to follow her long-time Tory inclinations. The Whiggish Churchills were sent packing on a victory tour of Europe from which they didn’t return until the Queen’s death in 1714 and an orderly legislated succession to some boring Protestants from Hanover.

Nobody got their heads chopped off, or even overthrown, which makes the movie’s events less dramatic than all the Game of Thrones-style stuff that preceded the Glorious Revolution of 1688, after which British politics was less violent and less family-driven. For example, despite falling out of favor with the Queen, Sarah died decades later, immensely rich.

One interesting aspect is that as Britain matured politically, and developed its titanically influential parliamentary system, women stopped having much power. Back when queens chopped rival queens heads off, women were sometimes the supreme figures in England. But as the system matured, women were reduced to the occasional constitutional monarch. England became famous for its male supremacy, and London became the world leader in men’s fashion, while women looked to Paris.

But the movie is not very interested in this impressive evolution of political norms in England, instead focusing on the catfight amongst the three women.

I would have been tempted to fudge the timeline by a few years to combine the rivalry between the two women courtiers with the more dramatic events of 1688 to 1704.

Shows about English royalty have in recent years been dominated by writer Peter Morgan (“The Queen,” “The Crown”) who has gotten extremely adept at telling stories about female royals that fascinate women and keep their husbands entertained enough to stay watching.

The Favourite isn’t much like those, though. It’s not much of a feminist movie either, since the three powerful women, while well-acted, are treated with mild derision by the male director Yorgos Lanthimos (The Lobster). In particular, the movie follows the scorned Duchess of Marlborough’s portrayal in her memoirs of the Queen as bloated and dim.

Recently, historians have noted that the kingdom seemed to thrive under the Queen’s fairly active rule (Anne was the last monarch to veto an act of parliament). (For example, Anne promoted the 1707 merger with Scotland that turned England’s greatest strategic weakness, sharing an island with an independent kingdom with an independent foreign policy, into a strength as Scots became among the British Empire’s most energetic servants). So Queen Anne’s reputation has recovered somewhat from Sarah Churchill’s calumnies, but not in this movie.

The male characters aren’t impressive either. Only young Nicholas Hoult as Harley, leader of the Tory opposition to the Churchills’ Whigs, makes any impression. No attempt is made to give cameos to any of the famous cultural figures of the era, many of whom were active in politics, such as scientist Isaac Newton (the Queen’s mint master), political insider and satirist Jonathan Swift, or pundit and novelist Daniel Defoe.

The Queen’s beloved husband, Prince George of Denmark, by whom she became pregnant 17 times (although without any heirs living past age 11), is written out of the picture. Moreover, Mrs. Churchill’s titanic husband John Churchill (whose life in war and peace was so eventful that Winston Churchill wrote a massive biography of his ancestor as a hero to make up for Thomas Babington Macaulay making John Churchill the chief villain of his History of England) is reduced to a kindly old duffer who, oddly enough, offscreen keeps defeating the mighty French army.

Both moves, which reduce male interest in the film, are made to play up the idea of the Queen having lesbian affairs with her two Keepers of the Privy Purse.

Sarah Churchill is the source of the idea, in her memoirs, that her dismissal from court in favor of her younger cousin/enemy Abigail was due to the Queen’s sapphic attachment to her younger rival. In the movie, turnabout is fair play, so the script posits a previous lesbian relationship between fat Anne and Sarah, despite all the evidence that both were ardently attached to their husbands. Richard Dawkins coined the term Duke of Marlborough Effect for an entry in Mrs. Churchill’s diary: “His Grace returned from the wars today and pleasured me twice in his top-boots.”

Lanthimos has no interest in playing up the dubious lesbian stuff as tragic LGBTs battling societal oppression. He just seems to find it funny in kind of a sniggering fashion.

So then what’s the real story about why did Anne replace Sarah with Abigail? Probably because Abigail was nicer to the Queen than the imperious Sarah.

The Favourite is a fairly good movie, but not all that funny (most of the jokes are in the trailer) and not all that interesting either.