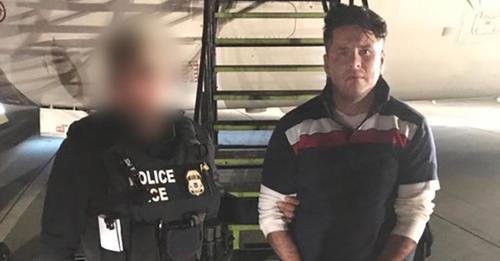 A Mexican national wanted on homicide charges in his home country was removed from the U.S. Tuesday by officers with U.S. Immigration and Customs Enforcement’s (ICE) Enforcement and Removal Operations (ERO).

On Sept. 27, Jose Froylan Garcia Melendez was admitted to the U.S. using a nonimmigrant H2-B visa. The day after his admission, the Government of Mexico notified ICE that he was the suspect in a double homicide in the city of Victoria in Tamaulipas, Mexico. On Sept. 29, ICE’s Homeland Security Investigations (HSI) special agents arrested Garcia at his place of employment in Weems, Virginia, on immigration violations because he intended to remain in the U.S. and did not possess the required documents to do so. On Sept. 30, Mexican law enforcement authorities issued an arrest warrant for Garcia formally charging him with homicide.

On Oct. 1, ICE served Garcia a notice to appear in immigration court. An immigration judge with the Executive Office for Immigration Review issued Garcia a final order of removal Nov. 20, and Garcia waived his right to appeal.

ICE removed or returned 226,119 aliens in fiscal year 2017. The proportion of FY17 removals resulting from ICE arrests increased by nearly ten percent over the previous fiscal year, and the number of ICE interior removals in FY17 increased by over 15,000 from FY16.