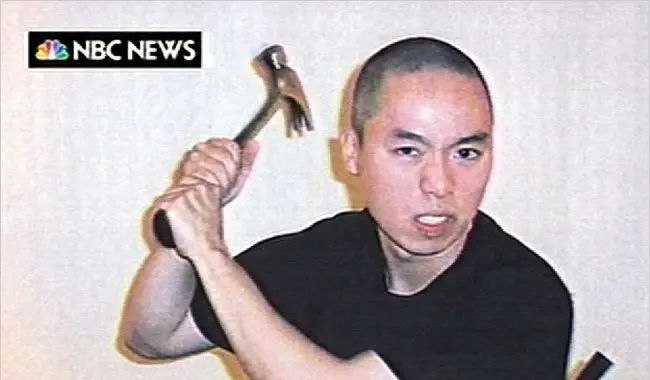 In general, I don't really like pontificating off unique and/or extreme events. (For example, Koreans have extremely low murder rates, so this mass murder isn't at all representative of a general pattern for them. Cho may well have doubled the Korean murder rate in America for the year, or even decade.) The sample size for these type of events is too small to determine a previously unobserved trend.

Nonetheless, let me toss out a bit of wholly unwarranted speculation about the influence of recent South Korean pop culture. South Korean movies and music (e.g., hip hop by returning Korean Americans rappers with street cred in Asia because they grew up on the mean streets of San Marino or wherever) are super cool now in Japan. The trendier Korean movies are, I hear, awfully violent. I made it through about ten minutes before fleeing of the popular South Korean film "Oldboy," which makes Quentin Tarantino's movies look like Erich Rohmer's. It's part of a series with "Sympathy for Mr. Vengeance," which I managed to avoid completely. (Not all South Korean films are quite so carnage-filled.) I have no idea if the shooter was a fan of pop culture developments in the country he left when he was about ten, but it's a possibility.

A more likely connection to pre-existing social patterns is between this loner who first shot a coed whom he considered his girlfriend (while the poor girl seemed to disagree), and the frustrations caused by the Dating Disparity.

Or then again, he may have just been plumb crazy, so speculating won't get us anywhere. We shall see...

"On Virginia Tech, I don't think the media has really examined why the gunman majored in English and his working-class parents let him pursue a major that has very little job prospects and therefore prospects for good relationships with women. Most students of his social circle are urged to find a good major for a good job such as accounting, medicine, law, pharmacy, engineering etc. I recently had a conversation with an older Chinese gentlemen and he said, in his days in Taiwan, if a young man majored in in the humanities, it was impossible for him to find a wife."